How long does it take to make a major discovery? Sometimes it takes decades of painstaking work, methodically sifting and analysing reams of data. And yet at other times, a flurry of intense toil leads rapidly to a revelation. At the dawn of the 20th century, a cascade of world-changing discoveries were made, rewriting the textbooks almost every year. A century later, it is easy to disregard how difficult and mysterious the work was, and none more so than the composition of the atom. 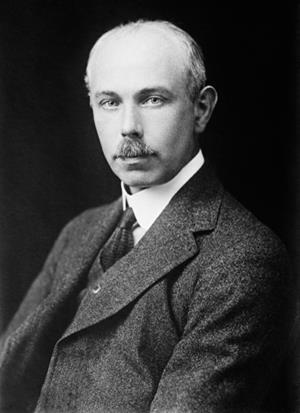 Among the many heroes of that time is Joseph Thomson, whose studies of cathode rays at the University of Cambridge, UK, culminated in his discovery of the electron in 1899. Thomson then turned his attention to the equally mysterious positive rays that travelled in the opposite direction to the electron in his discharge tubes. Thomson was convinced that there must be a unit of ‘positive electricity’ complementary to the electron. He studied the rays by passing them through a long capillary-shaped anode to obtain a beam and then deflected the beam using parallel electric and magnetic fields. The particles therefore travelled along a path described by a simple parabola, whose precise shape was determined by the particles’ charge to mass ratio.

But Thomson was plagued by confusing and seemingly contradictory results. In addition, he preferred his experiments to give a trace or spot on a screen or photographic plate; in other words, his experiments were largely qualitative and lacked reproducibility.

Everything changed when he hired the young Francis Aston in 1910. Aston had grown up with a love of chemistry: some of his earliest childhood experiments were on hydrogen-filled bubbles, and as a teenager he not only made picric acid bombs and fireworks, but also tried to make his own x-ray tubes.

Aston studied chemistry and physics at the University of Birmingham, UK, always finding time in practicals to practise glassblowing, a skill that would prove crucial only a few years later. After graduation, he joined a brewery as a fermentation chemist but returned to Birmingham three years later to study gas discharges with John Poynting, today remembered for the eponymous electromagnetic vector. Poynting was so impressed by Aston’s abilities as an experimentalist that he recommended him to Thomson, and Aston’s impact was immediate.

Aston systematically modified Thomson’s apparatus to make it more precise and versatile. The parabola method developed steadily and when in 1912 neon was introduced into the discharge tube, a pair of closely spaced parabolas appeared; one strong and one faint. Thompson was thrilled by this, and hoped that he had discovered a new element. Aston was less certain; Frederick Soddy had recently proposed that an element could exist in different forms – isotopes – although their separation was proving next to impossible. 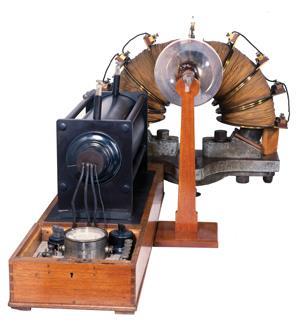 A timely fellowship allowed Aston to work on isotopes independently of Thomson. Having learned the basics of gas handling from a student of William Ramsay’s he tried for months to separate the isotopes of neon by distilling fractions of liquid air. This was a failure, especially as he was rumoured to have dropped a flask containing one of his precious fractions. Undeterred, he tried effusion through porous pipeclay and at last began to see minute levels of enrichment that he measured using a quartz microbalance. The outbreak of war stopped his experiments and he was seconded to the Royal Aircraft Factory in Farnborough. When he resumed his work in 1919, isotopes were no longer a matter for conjecture and establishing the masses of atoms with high precision was an urgent issue. The parabola method, however, just would not do.

Aston set up a new vacuum system, driven by the latest Gaede mercury pump. To get a stronger beam, he passed his ions through two slits rather than a tube. Then two parallel plates deflected the ions through a small angle, allowing ions of a range of energies to be selected. Passing the beam between the poles of a large magnet then deflected the ions’ paths according to their mass; by tuning the electric field, ions of different mass could be brought to focus on a photographic plate. Because the device was set up like Gustav Kirchhoff’s spectroscope, Aston named it a mass spectrograph. He confirmed that neon had two isotopes, as did chlorine, and measured the masses of every element he could find. He was awarded the Nobel prize in 1922 and mass spectrometry took off.

Today mass spectrometry is one the fastest and most powerful analytical tools of all time, with applications unimaginable even 10 years ago: surgeons, for example, are able to monitor in real time the tissue they cut through, while wine sleuths can uncover wine fraud by tracking the isotope distributions in suspect bottles. The mass spectrometer has become one of the great enabling tools of science. And it may yet enable another Nobel prize to be won after just three years’ work.