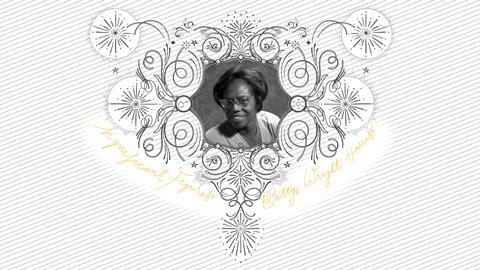 Growing up in the US state of Louisiana, Betty Wright missed many days at school to help with planting, harvesting and other jobs on the family farm. She clearly learned to work hard and had talent and ambition, as she didn’t let the family business prevent her from getting a good education and following the advice of teachers who encouraged her into science. She would eventually become an explosives researcher working on secret chemistry projects at the US government’s Los Alamos National Laboratory (LANL), one of the only Black female scientists in the lab at that time.

By 1961, aged just 19, she had graduated from Southern University in Baton Rouge with a chemistry degree and changed her name to Betty Wright Harris, having married the previous summer. From then until 1970, she moved between academic positions at several different universities and worked for a short spell at IBM in Colorado before eventually securing a visiting professor position at LANL. She got ‘Q clearance’ for the lab, which was established during the second world war as a centre for weapons design, meaning she had access to top secret restricted data to help with her research. At that time LANL was populated mostly by white male scientists, like many scientific institutions, a fact that Harris linked to a lack of self-esteem among America’s minority youth and would strive to change.

She already had a master’s degree and a half-finished doctorate, which she was doing with the University of New Mexico but ended up completing at LANL, funded by the US Atomic Energy Commission. Her PhD project was on the reactions of 2-aminopyridine. She focused on exploring the mechanisms of these reactions, making no reference in her thesis to the implications of the work, although it was undeniably within the same realm that her advisor, Michael Coburn, worked in.

Coburn was the director for synthetic explosives at LANL for 30 years and became a long-standing collaborator. In her thesis, which she completed in 1975, Harris thanked him for ‘the many readings, helpful suggestions, the time, patience and understanding that [he] gave’ during its writing. Her results were published in The Journal of Heterocyclic Chemistry a year later. By this time, her role at the lab had become permanent.

Harris’s thesis, and several papers she and Coburn co-authored, were mostly dense chemistry texts, offering no hint of the context or application of their work. ‘Typically the articles published on energetic materials during that time frame focused entirely on the organic chemistry aspect,’ says David Chavez, the current deputy group leader of the high explosives science and technology group at LANL. ‘So … the importance of the work was not readily available to the chemistry community.’ This may be why the content of Harris’s synthetic work on explosives may seem, retrospectively, to have been glossed over. Although close inspection of a 1986 US Black Engineer article about women in technology refers to her ‘synthesising nitro-organic compounds and other compounds that have explosive properties’, most instead highlight her accomplishments in the field of environmental remediation.

The path that Harris’s research took was heavily influenced by Coburn, according to Chavez. Both were developing ‘thermally stable’ or heat-resistant explosives as part of Project Plowshare, a US government initiative billed as a programme for exploring peaceful applications of nuclear explosives including mining, construction and forcing natural gas and oil out of underground reservoirs. Plowshare saw 31 nuclear warheads detonated between 1961 and 1973, mostly at the government’s Nevada test site northwest of Las Vegas. The project became so divisive due to the radioactive contamination caused by the blasts that in 1977 it was terminated.

As a general rule of thumb, the heat-resistant explosives that Harris and Coburn were interested in were expected to be less impressive when it came to actually exploding than heat-sensitive ones – thermal stability and explosiveness were considered ‘mutually exclusive’, as Coburn put it in one patent application. They were developing compounds that bucked that trend. Prior to Harris arriving at LANL and whilst Coburn was advising her on her PhD, he filed patents for such compounds, receiving them for 3-picrylamino-1,2,4-triazole (PATO), 2,6-bis(picrylamino)-3-5-dinitropyridine (PYX) and ammonium 2,4,5-trinitroimidazole (ATNI).

It would obviously be desirable to identify the high explosive promptly

By the 1980s, after Plowshare finished, more about the content and applications of their research was appearing in the scientific literature. A 1986 paper authored by Harris, Coburn and three other co-workers gives an overview of explosives synthesis at LANL. It details how 1,3,5-triamino-2,4,6-trinitrobenzene (TATB) – one of the most thermally stable high explosives and one that is used as a charge to create the shockwaves that set off nuclear warheads – was developed under Plowshare. It had been discovered as early as the 19th century and synthesised in its pure form years later by Bernhard Flürscheim at the Royal Institution in London, UK, but part of LANL’s remit was to ‘prepare and evaluate known compounds that may not have been proposed for explosives applications’, as they wrote in the paper.

Harris also carried out work resulting in some hefty technical documents for LANL. In one of these, dated 1981, she focused on the chemistry of TATB in sulfuric acid, stating that the data were ‘needed to develop an assay for TATB’. It seems she continued working on TATB as in 1985 she published details of a ‘spot test’ designed to detect the explosive at contaminated weapons testing sites, for safety and environmental clean-up. As she explained in the introduction, ‘High explosives may become scattered among fragmented materials during field testing of weapons. It would obviously be desirable to identify the [high explosive] promptly so it can be removed before it burns or detonates.’

A year later she was granted a patent for the test, which involved mixing a sample of the dust suspected of containing explosives with a solvent to produce a bright orange colour if TATB was present. It is this test that is often portrayed as Harris’s most important work, although in reality it is probably just the most accessible to the wider public and one for which the application is clear. The test could detect small quantities of the compound and distinguish between TATB and other explosives. According to Chavez, it was primarily developed for detecting TATB on equipment, in buildings and at outdoor firing areas in soil.

The TATB spot test has on several occasions been misrepresented as a method for detecting terrorist weapons at airports, but TATB is never used by terrorists because it is too insensitive to initiation , notes Jackie Akhavan, an explosives expert at Cranfield University’s Defence Academy in Swindon, UK. It’s possible other writers confused the compound with TATP (triacetone triperoxide), an explosive that has been used by terrorists. In any case, it seems Harris had her work cut out, as finding the right solvent for the test would have proved tricky. ‘TATB is notoriously hard to get to dissolve in solvents,’ Akhavan says.

The same year Harris received the patent, she did the interview for the US Black Engineer article, which described her as someone who felt ‘fortunate’ and ‘content’ in her career. The writer noted, however, that she wanted to be joined by more Black women in the laboratory. The article mentions that she had completed ‘a study… on the retention rate of Black females in the educational system’, and one of her gripes was that there was not enough support for Black women beyond the high school level. ‘That support is not there,’ she told the magazine.

Chavez, who notes his own Hispanic heritage, recalls Harris having a positive influence on his career when he first joined the lab. ‘I remember her seeking me out when I first worked as a summer student back then,’ he says. ‘This [was] in part due to her interest in recruiting more people of colour in Stem [science, technology, engineering and mathematics] careers.’ Chavez now works in Harris’s former lab space, and the two were both working at LANL from 1993 until she retired in 2002. Although he didn’t work with her directly, he recalls her as someone who was very student-orientated. She was also a member of LANL’s Diversity Office, charged with helping the human resources department to make better use of the resumés it received from underrepresented groups.

Later in her career, Harris seems to have devoted time to communicating about explosives science – publishing a primer on explosive safety in the Journal of Chemical Education in 1987 – and promoting chemistry in general. She is often credited as having an important input in the creation of a chemistry badge for the Girl Scouts.

Three years before her retirement from LANL, Harris received an award for Outstanding New Mexico Women from the governor of New Mexico, putting her in the company of, for example, Linda Morgan Lovejoy, the first Native American woman elected to the state’s House of Representatives. The award was given to women who were considered leaders in their profession and who had implemented positive change in their communities. After LANL, Harris spent more than a decade reviewing certified documents for the US Department of Energy, deciding which needed to be kept top secret and which could be released to the public.

While the full details of her work may be undisclosed, she remains a role model and was a staunch supporter for minority women in top-level science. LANL is still striving to improve its diversity through inclusion programmes; today, nearly half of its workforce is non-white and the proportion of women has increased from 11% during the Manhattan Project to over 32%. No doubt, Harris would have loved to have shared her lab with some of these women.