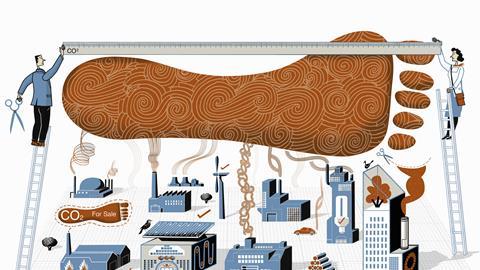 ‘This century will witness a major transformation in how energy is acquired, stored, and utilized globally,’ said three of chemistry’s big hitters – Richard Eisenberg, Harry Gray and George Crabtree – in a report of a symposium held by the US National Academy of Sciences last year on decarbonising the energy landscape. But that’s the optimistic view; one could add: ‘because if it does not, human civilization might crumble’.

The authors don’t hold back on the grim realities. ‘To avoid the worst consequences of climate change, global carbon emissions must peak by 2020 to 2030, decline to zero by 2050, and become negative (by removing carbon dioxide from the atmosphere) beyond 2050,’ they say, based on a 2018 analysis by the Intergovernmental Panel on Climate Change (IPCC). But current trends don’t look good: although carbon emissions stayed more or less flat from 2014 to 2016, they rose by 2% in 2017 and by 2.7% in 2018. We can’t blame all of this on President Donald Trump’s climate-change denialist policies, although those have hardly helped.

Chemistry to the rescue?

One shortcoming of the IPCC report, Eisenberg and colleagues note, is that it fails to explain how a zero-carbon economy might be attained. In response, they make it clear that chemistry is central to the increasingly desperate enterprise of developing new carbon-free energy technologies.

Among the goals for chemists are new materials for batteries, energy storage and solar photovoltaic power, catalysts for sustainable chemicals production and hydrogen generation, new zero-carbon green fuels and techniques for carbon capture. The opportunities are tremendous and exciting. But they are hardly new – much of the summary of these scientific challenges could have been written 10 or even 20 years ago. That’s what troubles me.

Which is not to say nothing has changed. For example, the market for lithium batteries has soared over the past decade, with a concurrent 73% drop in their cost from 2010 to 2016. Today, the lithium–air batteries first mooted in the 1970s are the favoured candidate for electric vehicles, although their commercial use remains years away.

Machine learning is another important advance. In one application, this computational tool is being used to create and mine materials and chemical databases to speed up the rate of discovery and innovation – the explicit goal voiced by President Barack Obama when he launched the Materials Genome Initiative in 2011. Computer-driven searches for new compounds and materials are helped too by improvements in simulation techniques, which themselves deploy machine learning in place of laborious quantum calculations of properties.

But many things have not really changed at all. Are we any closer to commercial photocatalytic water splitting for hydrogen generation? No – and partly as a consequence, there is little investment in infrastructure for a ‘hydrogen economy’ – a phrase that already sounds quaintly retro. The efficiency of commercial solar cells has more or less flatlined (though expensive state-of-the-art ‘multi-junction’ research cells are getting better), and cheap dye-sensitised cells, which looked so attractive when they were invented in 1991, still have not reached the market, partly because their efficiencies remain low.

More of the same

All this could sound defeatist. But it is more a matter of setting the right priorities. Eisenberg and colleagues point out that an article for the World Economic Forum (WEF) on the future of energy omitted scientists from the list of ‘key players’ needed to transform the way we produce it, and they are right to lament that omission. Yet the WEF article was also right to put the onus on companies, investors and governments to find ingenious solutions, because we already have many of the technologies we need; what’s lacking are the incentives and infrastructure needed to implement them.

The take-up of photovoltaics, for example, does not depend on squeezing a few percent more in efficiency from new materials, but on initiatives such as the incentives and tariffs that have boosted the proportion of electricity generated in Germany by solar from just 1–2% in 2010 to 7% in 2017.

Eisenberg and colleagues don’t mention nuclear energy, which must be a vital part of the energy portfolio (and also poses demanding scientific challenges to improve safety and efficiency, and to crack the fusion challenge). Anyone who has explored electric vehicles or domestic solar energy knows that the market is failing to provide good infrastructure: a laissez-faire approach is not enough.

The truth is that there is no technofix just around the corner that will avert devastating climate change. Of course scientists should – and must – keep looking for better energy solutions. But they must not let industry, politicians and markets off the hook by promising to provide them in time.