Félix Houphouët-Boigny, who steered Ivory Coast to independence in 1959, was known as the Sage of Africa

Félix Houphouët-Boigny, who steered Ivory Coast to independence in 1959, was known as the Sage of Africa. Not for him the revolutionary histrionics of his contemporaries. Instead Houphouët stayed close to France, championing a political and economic union that he called Françafrique. It led to Ivory Coast’s remarkable economic progress, and to his own outrageous enrichment. But Houphouët was well aware of the challenges of holding an African country together. Tribalism, he declared, is the scourge of Africa.

It is tempting to imagine such divisions as exotic. Yet, in our everyday lives, tribalism is never far away, whether based on something simple, like religion, or something really serious, like football.

Even in the world of science we cling to our own superior patch. In a moment of hubris, Ernest Rutherford remarked that ’all science is either physics or stamp-collecting’. And undergraduate chemists complain that electrostatics and kinetic energy are ’just physics’, while most biology students quail at the prospect of studying any chemistry at all. 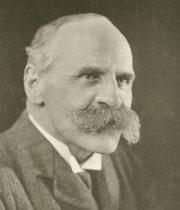 But the greats, whether political or scientific, usually rise above such petty disputes and draw on the strengths of each camp to build something new, and few more so than John Scott Haldane.

Born to an aristocratic family in Scotland, UK, Haldane studied medicine first at Edinburgh and then in Jena, Germany. He became a demonstrator at University College Dundee, measuring the composition of air and the bacteria suspended in it. Needing more training, he soon quit this position and went to study physiological chemistry in Berlin for a few months, returning to a position at Oxford where his uncle, Sir John Burdon-Sanderson, was professor of physiology. Here Haldane developed a gravimetric method to determine CO2 and moisture in air and began to apply the method to explore respiratory exchange in animals.

Around this time he became interested in symptoms exhibited by miners exposed to ’choke damp’ and ’black damp’ in coal mines. Visiting collieries in Staffordshire, he analysed the air at various depths using a portable apparatus of his own design, and established that in some there was severe oxygen depletion. In others, coal fires generated deadly carbon monoxide, whose effects were poorly understood. 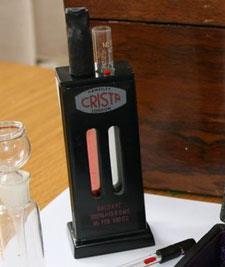 Haldane began dosing himself with carbon monoxide to establish its affinity for haemoglobin, and his data provided powerful forensic evidence as to the cause of death in mining accidents. As a result of his 1896 report to the home secretary, miners began carrying mice or canaries to warn them of insidious gases underground.

But fundamentals were never far from his mind. He visited Christian Bohr in Copenhagen, then the leading expert on blood gas analysis. Returning to Oxford he spotted that the pink colour of carboxyhaemoglobin would provide a delicate colorimetric method of revealing blood oxygen levels directly. Then, in 1898, Haldane noticed that blood lost oxygen or CO rapidly on oxidation with ferricyanide. He realised that he could use this effect to quantify any blood gas, which led him to devise a simple and rapid blood gas analyser.

The idea was very simple. Two identical glass capillaries filled with coloured water were joined together in a U-shape with rubber tubing. One arm was then connected to a small bottle into which a known amount of blood was introduced. The bottle also contained a cup for the alkaline ferricyanide. The sample bottle was shaken and mixed to release the gas, the volume of which could be read almost immediately off a scale, with a second control device serving to correct for errors.

Haldane was now the leader in respiratory physiology and he soon established how minute changes in CO2 level resulted in huge changes in breathing rate and pattern. Over the next few years he made crucial studies of both divers and climbers using a pressure chamber at the Lister Institute in London, during which time he developed the first decompression tables for divers. The resulting papers make amusing reading, until one realises how close he and his collaborators came to death.

With the outbreak of the first world war he was called upon to develop methods of protecting soldiers from poison gases - chlorine and phosgene - and developed the first gas mask and respirator.

Haldane remained an active experimenter and observer to the end. In spite of carrying out the most detailed and focused experiments, in which he used tools from any field that could be useful, he never lost sight of the big picture - the mystery of life itself. So if a student complains of having to learn something that doesn’t look like core material, remind them gently that tribalism is the scourge of science too.