Separating crystals is a cinch using a Hirsch funnel, but it was not always thus

For the synthetic chemist, little can match the moment when one spies the telltale glint of a crop of crystals at the bottom of a flask. It is like a ray of sunshine, spreading joy throughout the lab. Separating the crystals is a cinch using a Hirsch funnel, but it was not always thus.

Robert Hirsch was born in Danzig in 1856, the son of a prominent doctor and academic, Aron Simon Hirsch, a Jew who had converted to Catholicism. Robert became a chemist and studied for his PhD in Strasbourg with the one of the leading synthetic chemists of the day, Rudolf Fittig, graduating around 1878 with a thesis on chloroquinone imide. He soon had a job in the burgeoning dye industry, joining the firm of J W Weiler in the town of Ehrenfeld on the outskirts of Cologne. The company embraced innovation and Hirsch worked in their research lab, publishing research into quinolines and cresols. 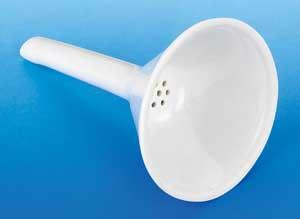 He must have been good at his job, because in 1887 he was appointed director of the Kirkheaton Colour Works in Huddersfield in the English Midlands. He was, by this time, publishing steadily and getting involved in some of the controversies of the day, such as the uncertainty over the structure of a striking compound referred to as Meldola’s blue. He clearly loved working at the bench, since almost all of his publications appeared under his name alone, with occasional thanks to German colleagues for gifts of starting materials. In 1888, shortly after joining Kirkheaton, he published the little note that would immortalise his name.

It is hard to believe that, until the 1860s, the only way of recovering a solid product from a reaction mixture was either to decant off the supernatant liquor, or to pour the whole mixture into carefully fluted filter and then wait patiently until the paper dried before transferring the treasure to a suitable sample bottle. 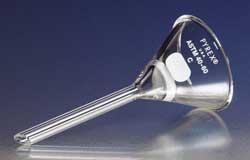 Everything changed in 1865 when a young Swiss chemist, Jules Piccard, fresh from studies with Robert Bunsen, introduced the water vacuum aspirator, which increased the speed of filtrations enormously. Aspirators were soon standard issue in all labs and suction filtration became the rule. But there was a problem: in conical funnels all of the force would be exerted at the tip of the cone of paper - even a skilled chemist would see his filtration ruined when the paper was punctured. Filters were therefore fitted with small platinum cones to support the paper.

By 1886 the Berlin chemist Otto N Witt had had enough. He suggested placing a flat, perforated disc (Witt recommended platinum, but failing that, iron or porcelain) into the funnel itself, covered by two pieces of filter paper. With the pressure distributed across the entire surface, punctures became a thing of the past. Witt recommended that at the end of the filtration a watch glass be placed over the funnel, which was then quickly inverted - the disc and filter papers could then be removed with tweezers revealing the gleaming crystals beneath. It was so simple that thousands were made and it was quickly taken up across Europe.

Hirsch, however, went one better. Frustrated by the leaks round the edges of Witt’s disc, he designed a one-piece device - a conical porcelain funnel with sieve-like panel half way along its length which soon replaced Witt’s discs.

Hirsch stayed in Huddersfield for a decade before moving back to Berlin to set up a soap factory. He must have been busy as his publications cease after 1902. But tragedy struck in 1913 - his company was bankrupted and Hirsch was ruined. On the night of 18 May Hirsch took his own life at the age of 57, leaving his wife Anna, four daughters and a six year old son, Kurt, who in spite of all odds would become a distinguished mathematician and return to the faith of his grandfather.

As Shakespeare wrote in A Winter’s Tale, ’What’s gone and what’s past help, should be past grief.’ Vacuum filtration, on the other hand, is ubiquitous today and no lab is without a few dozen Hirsch funnels in plastic, porcelain, or in Pyrex with fritted glass discs to obviate the need for filter paper. Hirsch may have thought he had lost everything, but his funnel lives on, cradling our chemical successes.