As a child, I remember wondering how far one could count 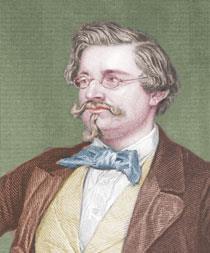 As a child, I remember wondering how far one could count. I was intrigued by -illions, numbers so large that they defied comprehension. We would argue in the playground about what exactly a googol was and where there was anything really that big. We started to multiply and divide and eventually came to fractions, delightful entities that allowed us to slice up numbers like cakes. You could feel them. One twelfth. Three fifths. They were intensely visual.

To chemists, simple fractions and ratios hold no fear - they are our bread and butter. But in the early days of chemistry there seemed no rhyme or reason to the composition of materials. Things changed when the French chemist Joseph Louis Proust carried out a series of careful experiments in inorganic chemistry. In the most famous, he showed that copper carbonate contained the same ratio of copper, carbon and oxygen, regardless of its source. He obtained similar results for iron oxide and sulfide - the ratio of the constituents was always simple and invariant. This led Proust to submit a paper to the French Academy in 1794 enunciating a ’Law of definite or constant proportion’.

The highly respected Claude Louis Berthollet, who had worked alongside Lavoisier, objected. Berthollet held that elements could be mixed in any proportion. A furious argument followed, and Proust’s paper was not accepted. Undaunted, Proust continued to publish lower key papers, all pointing to the same result. His tenacity was vindicated in 1811 when Berzelius, after a frenzy of analysis in his quest for a definitive listing of elements and their weights, confirmed the truth and gave Proust credit.

Proust’s idea would become one of the cornerstones of chemistry. It suggested that matter itself is discrete. The idea would be codified in John Dalton’s atomic theory: in an atomic world, compounds are just atoms in a particular ratio.

But how, as a teacher, could one convey this idea? Weights were too fiddly and required one to do arithmetic. What one needed was something so obvious that anyone would get the idea.

August Wilhelm Hofmann started out unpromisingly. He was interested in everything: architecture, law, science, history, the lot. His father, an architect in the German town of Giessen, must have despaired of what the boy would do with his future. Having been involved in the construction of new laboratories for Justus Liebig, he approached the great man for advice. Liebig replied that he would be delighted to take the young man on for a spell to see what could be made of him. In short order Hofmann was hooked and proved something of a prodigy, quickly gaining his Habilitation.

In 1844 when Liebig went to England to discuss business ventures Hofmann, who by then was engaged to Liebig’s niece, sneakily fixed himself up with a position in Bonn. Liebig was not impressed to find his star had decamped. What is more, Liebig had plans - he wanted Friederich Mohr for Bonn, while Hofmann he intended for London, where Prince Albert was keen to see an institute of chemistry established.

With generous pay and new labs, Hofmann knew a good thing when he saw it. London was very congenial and he and his students set to work. A man of boundless energy, Hofmann sometimes expected students to discuss chemistry at 2am, and was involved in countless plans to link industry and academia, not least the Great Exhibition of 1851.

But he also gave fantastically extrovert lectures, for which he developed special apparatus. Among these was his voltammeter - two upturned burettes equipped with electrodes that could collect and quantify the two gases produced by electrolysis of water. It was simple, visual and immediately conveyed the idea of atomic ratios. His enthusiasm attracted countless students - among them Perkin, Abel (alkaloids and cordite), Crookes (spectroscopy), Mansfield (fractional distillation), Newlands (Law of Octaves), and Odling (periodicity). 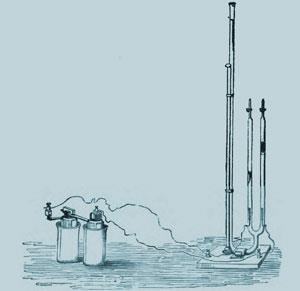 In 1860 he was lured back to Germany and became a professor in Berlin, where he and his coworkers published over 800 papers. For his 60th birthday the German Chemical Society published a somewhat smutty pamphlet in the style of their journal entitled the Berichte der Durstigen Chemischen Gesellschaft  - Reports of the Thirsty Chemists Society.

By the time Hofmann died, with one more completed manuscript on his desk, chemistry and industry had been cemented and atomic proportions were every chemist’s starting point. But ironically, the fun was only just beginning. Non-stoichiometric compounds, the berthollides, had not gone away and would play an ever increasing role in chemistry. Fractions and simple ratios are good for beginners, but beyond them lies an even more exciting world.