Approximately 2nd century AD. One of the earliest alchemists, inventor of the 'bain marie', the kerotakis apparatus and the tribikos still

Do you remember those huge posters a few years ago, showing the great American sprinter, Carl Lewis, glaring at the camera while poised to sprint? At the base of his impossibly long legs were a pair of scarlet stilettos. The slogan - Power is nothing without control  - neatly encapsulates the challenge faced daily by synthetic chemists: how to shepherd an uncountable number of emancipated molecules along the desired pathway. While raising the temperature will accelerate (most) chemical reactions, its effect can be frustratingly democratic, often leading to loss of selectivity and undesirable side-reactions. 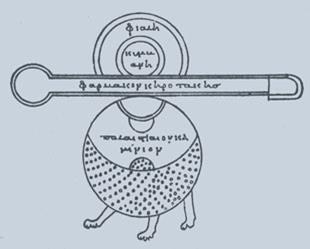 Such concerns go back into the mists of time. To the alchemist, the set of properties manifested by matter - its form - was thought to be determined by the interaction of matter with the spirits, vaporous entities akin to breath that were also responsible for mysterious phenomena like fire and life itself. Thus transmutation, often dismissed as foolish attempts to convert lead into gold, was the serious process of altering the form a material by judicious steps that paralleled the cycle of Man’s life. A gentle cohobation step - sometimes carried out using warm dung - would breathe life into the system, much as a hen sits on her eggs. Blackening by heating was the analogue of the putrefaction of the body. Calcination, whitening, could be thought of as equivalent of the bleaching of the bones. Distillation and sublimation were, in effect, the resurrection of the body after death, bringing both the material, and the alchemist, ever closer to perfection and immortality.

The earliest treatise in practical alchemy to have come down to us was written in the 3rd century AD by an Egyptian Greek, Zosimos of Panopolis. Typical of alchemical, and some modern chemical, writing, the text is fairly obscure and makes extensive reference to the contributions of earlier workers. But while modern journals present the latest discoveries, one of the key premises of alchemy was a profoundly pessimistic one: that the ancients had once held the keys to the universe but that this knowledge was now lost and had to be rediscovered.

Zosimos was no exception to this, and quotes extensively from the works of a woman known as Maria Hebraica - Maria the Jewess - who is variously described by other writers as Miriam, the sister of Moses. Maria’s precise dates are uncertain but she seems to have lived a couple of generations before Zosimos, probably also in Egypt. Her kinship to the Old Testament prophet is improbable, but legends linking Biblical figures and Greek deities to alchemy were common - such pedigrees only added mystique and authenticity to alchemical works.

In his treatise, Zosimos attributes to Maria three crucial pieces of equipment. The first became known as the ’balneum mariae’ or Mary bath, a double-walled container, equipped with feet that could be stood on a fire. With the outer container filled with water, material to be transmuted could be placed in the inner chamber where its temperature would be kept at no higher than the boiling point of water.

The second device was the kerotakis, a simple two chambered reflux device. Then there was the remarkable tribikos, or triple-headed still, which allowed a distillate to be collected from three outlets at once.

If distillation has evolved, the bain marie remains much as it was, the method of choice for gentle heating (dung being less generally available in labs these days) particularly for distillations where there is a risk of bumping, as with the rotary evaporator. In the kitchen, a bain marie placed in the oven allows the delicate setting of moist puddings and timbales, while the unmoderated heat at the top drives the Maillard and caramelisation reactions that give tasty crusts. My molecular mixologist friends Tony and Giles favour the bain marie to infuse their cocktail alcohols with exotic flavours. Molecular gastronomy, too, is nothing without control.