The simmering tensions between science and religion 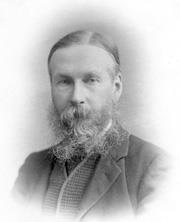 The simmering tensions between science and religion flare up from time to time. If in Italy, Galileo got into trouble with the Church in the 16th century, in England it was Charles Darwin’s ideas that really got everyone talking. The publication of On the origin of species  in 1859, quickly misrepresented as implying that man was descended from apes, caused outrage and shock. Public debates turned into slanging matches, and newspapers printed satirical cartoons of leading scientists.

While the heat was mostly focused on biology, physical scientists were not immune to the debate’s impact. Among the most prominent was a chemist, Herbert McLeod, who felt it necessary to declare his position and gathered others to join him.

McLeod was born a north Londoner, the son of a brewer, but went to school in Stockwell, south of the Thames, and later to a school in Deal in Kent. McLeod received his basic training in chemistry at the Royal Panopticon in London’s Leicester Square, one of the visionary institutions that sprang up in the wake of the Great Exhibition of 1851. Named after the atheist Jeremy Bentham’s controversial idea of a prison where a single guard could watch over all of his charges, the Panopticon was a showcase of the arts and sciences.

By the time it failed in 1856, McLeod had moved on to the more prestigious Royal College of Chemistry (RCC) in Oxford Street, under August Hofmann (See Chemistry World, January 2010, p68). It must have been an exciting time - the group, wrestling with coal tar, attracted many of the best young chemists. It is an indication of his talent that McLeod quickly became favourite assistant to the famously clumsy Hofmann. Two years later, when Hofmann moved back to Germany, McLeod followed him. But when Hofmann moved again in 1864 - from Bonn to Berlin - McLeod returned to London.

He found a post with Hofmann’s successor at the RCC, Edward Frankland. What is not clear is what he actually did. There are no publications to draw on, though his contemporaries report that he had worked on dye synthesis. But organic chemistry was clearly not his thing, and back in London he became interested in the latest developments in the handling of gases. August T?pler (See Chemistry World, January 2011, p68) unveiled his piston pump in 1862. McLeod’s contemporary at the RCC, Hermann Sprengel (See Chemistry World, February 2008, p67) invented his much faster mercury dropping pump in 1865. So the study of gases at low pressure could now become an almost mainstream occupation.

The real problem was how to measure the extraordinarily low pressures that these pumps reached. Even with the best cathetometer - a travelling microscope fitted to a scaled track - a standard manometer lacked the precision required. 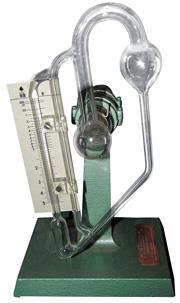 In 1874, McLeod published his solution. Taking inspiration from T?pler, he used a mercury column to isolate a fixed volume of gas from the vacuum system. Raising a mercury reservoir, the aliquot of gas was then compressed into a calibrated capillary. The residual volume at a standard pressure could then be related back to the pressure in the system. Impressively, the scheme worked down to 10-6mmHg and became a standard feature of high vacuum lines. Nevertheless, the method had its critics. The reservoir had to be reset for each pressure reading. It was also unsuitable for condensable or compressible gases deviating substantially from Boyle’s law - water vapour was particularly insidious. And the mercury had to be clean. Yet in spite of this, even after the appearance of electronic replacements, the McLeod gauge refused to go away; the compact Vacustat remains surprisingly common in labs today, almost 150 years later.

But McLeod was also a devout Anglican, and in the febrile atmosphere of the early 1860’s, he and a group of colleagues wrote a declaration expressing their objection to how ’researches into scientific truth are perverted by some in our own times into occasion for casting doubt upon the truth and authenticity of the Holy Scriptures’. Circulated as a petition in 1864, the declaration gathered a substantial number of adherents - many of them chemists from the Royal College - and created quite a stir. But it was a flash in the pan and the campaign fizzled, and today McLeod is remembered as much for his Catalogue of the scientific papers of the Royal Society  as he is for his gauge.

But the argument between science and religion continues, and has become ever more political. Ironically, the religious literalists, particularly those in the US, argue that science itself is a belief system much like a religion. What, one wonders, would McLeod have made of that?