Wilhelm Johann Schlenk, the German chemist who prepared some of the first organosodium and organolithium compounds, and developed the inert-atmosphere techniques now common in many labs

In one of the more memorable passages from his memoirs, Heinrich Schliemann - the infamous Russian-German archaeologist, adventurer and gold-digger - describes entering a shaft tomb at Mycenae to find several skeletons lying side by side. Removing the enormous gold mask covering the face of one of the bodies, he watched in horror as the ancient skull crumbled to dust under his gaze. Quick to jump to conclusions, as usual, he later wrote triumphantly that he had ’gazed upon the face of Agamemnon’. 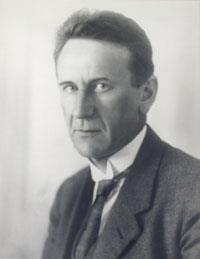 Synthetic inorganic chemists can sympathise with Schliemann’s feelings, if not his archaeological exaggerations. Who hasn’t spent days making an aggressive and capricious compound, only to watch it decompose before your eyes? It takes only a small lapse in concentration to destine your precious air-sensitive material for the waste solvent container.

As far back as the early 1850s English chemist Edward Frankland described flasks exploding, throwing bright green flames across his lab, as he heroically distilled dialkylzinc compounds under an atmosphere of hydrogen.

Over the succeeding years, many chemists attempted to isolate ever more air-sensitive materials. One of the most spectacular was Beckmann’s isolation of the product of the reaction of sodium with benzophenone: producing the blue ketyl so sensitive to oxygen and water that it has been used as an indicator in solvent stills ever since. Beckmann and his colleagues describe carrying out the work under an atmosphere of dry hydrogen or carbon dioxide made in a Kipp’s apparatus. A series of rubber tubes and clips allowed the experimenter to move solutions between flasks, shielded all the while from air.

Such chemistry was not for the faint-hearted: the mind boggles at the thought of manipulating pyrophoric compounds under hydrogen. On the other hand, the origin of that favourite reaction of first year organic laboratories, the carbonation of a Grignard reagent, must have been a serendipitous discovery resulting from working under carbon dioxide.

Two things were needed to make things easier: a more convenient and inert blanketing gas, and a compact set of techniques for manipulation. German engineer Carl von Linde’s patent for the liquefaction and fractional distillation of air in 1895 soon provided the answer to the first problem. Compressed nitrogen of moderate purity became available for laboratory use and as a feedstock for the rapidly expanding Haber–Bosch process. Significant purification was needed, but this drawback was far outweighed by the convenience and volume of gas available from a single cylinder. 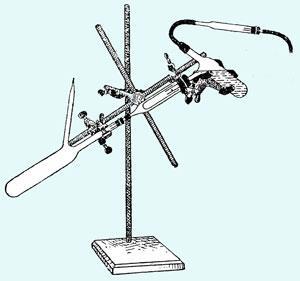 The techniques came from an ambitious young German chemist, Wilhelm Johann Schlenk (1879–1943). Fresh from his PhD and a short spell in industry, Schlenk obtained a junior position in Munich in 1906 and chose to work on one of the most exciting problems of the day: investigating the recently proposed triphenylmethyl radical. By making very stable crystalline para-substituted phenyl derivatives, Schlenk proved the radical’s existence. He then isolated a series of stable radicals, and also Beckmann’s benzophenone ketyl. By now a chemist with recognised talent, Schlenk went on to prepare organosodium and the first organolithium compounds, isolated the first metal enolate and was nominated for the Nobel prize, though he didn’t win it.

To handle his sensitive materials, Schlenk invented a set of simple techniques based around flasks and filters equipped with side-arms to pump or fill the glassware with nitrogen. Particularly ingenious was his one-piece filtration device consisting of two flasks connected to either end of a glass tube containing a Soxhlet thimble to filter pyrophoric materials, a device which became known as the Schlenk-Kreuz (Schlenk cross, above) - the direct ancestor of today’s swivel-frit. Nowadays every synthetic chemist has flasks with side-arms, and the operation of pumping and filling flasks that Schlenk codified is universal.

Schlenk had three sons, all chemists: two did PhDs with their father. With Wilhelm Jr, he published a masterful paper on the nature of Grignard reagents, remarkable for its concision and for the absence of a single reference to the literature. He moved on to Chairs in Vienna and in 1921 to Berlin. But Schlenk had little sympathy for the Nazi party when it came to power, and his position in Berlin became increasingly uncomfortable as he refused to cut his links with Jewish colleagues such as Fritz Haber. In 1935 he moved to Tubingen where the atmosphere was less oppressive, but by then he was doing less chemistry and more administration. He died in 1943, having been expelled from the German Chemical Society the previous year.

Andrea Sella is an inorganic chemist at University College London