The map of scientific disciplines is growing ever more complex. Derek Lowe surveys the country

The map of scientific disciplines is growing ever more complex. Derek Lowe surveys the country

The borders of chemistry are famously inexact. If you start out in the middle of the discipline, a spot presumably marked by a copy of the periodic table held down against the wind by an Erlenmeyer flask, you can find yourself wandering into many other fields if you pick some random direction and just start walking. Molecular biology, physics, materials science, physiology, even pure mathematics is a neighbour, and these neighbours are usually reached through a zone of interdisciplinary stuff that’s rather hard to define. So, under these conditions, who counts as a chemist? 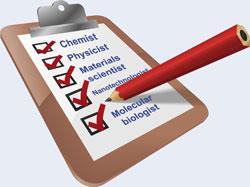 There have been some rather sweeping territorial claims made over the years, generally during those periods when we’re trying to drum up more funding and visibility. (This is the ’Gosh, when you get right down to it, everything’s chemistry!’ school, which I have to admit I find pretty tedious). But it’s hard for me to claim the molecular biologists, to pick one example, as fellow chemists, even though they are manipulating molecules (albeit rather large ones). The molecular biologists tend to find it even harder to claim chemistry as theirs, actually, but there are people who’ve made that case. At the same time, I have no difficulty seeing polymer chemists as brothers, even though their molecules are, if anything, even larger.

Any effort to define the limits of chemistry based on what people are working on is going to be tricky. I think a better method is to look at how people are working on their subject, what their approach to it is. And as far as I’m concerned, if your subject is the behaviour of individual molecules, you’re almost certainly doing chemistry. Below that scale, you’re talking about individual atoms, and you can start to call yourself a physicist. The single-atom spectroscopy people are, to my mind, right on the border, and you can look at them either way.

What about the work being done slightly above the molecular scale? Again, if you see your experiments as being about molecules and their interactions, welcome to chemistry, I say. Most of the polymer people fit right in under this definition, as do the molecular device synthesisers. They don’t have to be small molecules, and they don’t have to be simple ones. But as you start to be driven by bulk properties, especially those not built up by aggregating individual molecules, you start to edge out of the field. Semiconductor research, for example, looks like solid-state physics to me when they’re talking about doping layers of germanium, but it looks like chemistry to me when they’re designing molecular-organic wires.

This is a region where the borders are being redrawn, though. What about all those papers, dozens of them every single month, on the nanoscale structures formed by various substances when you precipitate them just so? Spears, rosettes, doughnuts, fuzzballs, they just keep coming, courtesy of modern microscopy techniques. My hope, which I’ve been clinging to for several years now, is that once we get past this descriptive curiosity-cabinet phase and start to understand what uses (if any) these materials have, that the explanations will drag things back to the molecular level. If not, then, the even more nebulous field of materials science will have new territory to call its own.

And that leaves us with the molecular biologists. There’s something about this field and the way that it uses the existing cellular machinery that takes it definitely out of contention for me as a branch of chemistry. In my experience, some of the people in this area don’t think of their experimental objects as molecules at all, but as abstractions of letters and abbreviations, which are manipulated with kits made of other abbreviations until the proteins and cells do what you want them to do. Maybe it’s that restriction enzymes, polymerases, and so on are difficult to picture at the molecular scale - it becomes easier just to see them as ’thingies’ that are defined by their end products.

So in the end, chemistry is more of an attitude than anything else. That’s something that the biologists and other specialists I’ve worked with would have no trouble agreeing with.