Borodin wasn't such an outstanding scientist after all, says Philip Ball, but science and music are far from mutually exclusive

Borodin wasn’t such an outstanding scientist after all, says Philip Ball, but science and music are far from mutually exclusive 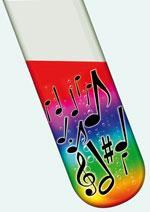 The composer Edward Elgar is said to have boasted that the first of his Pomp and Circumstance  marches had a tune that would ’knock ’em flat’. One day he inadvertently found a way to achieve that rather too literally. Elgar was an enthusiastic amateur chemist, and fitted up his home in Hereford with a laboratory which he called The Ark. His friend, the conductor and composer William Henry Reed, tells how Elgar delighted in making a ’phosphoric concoction’ which would explode spontaneously when dry - possibly Armstrong’s mixture, red phosphorus and potassium chlorate, used in toy cap guns. One day, Reed says, Elgar made a batch of the stuff but then musical inspiration struck. He put the mixture into a metal basin and dumped it in the water butt before returning to the house.

’Just as he was getting on famously,’ wrote Reed, ’writing in horn and trumpet parts, and mapping out woodwind, a sudden and unexpected crash, as of all the percussion in all the orchestras on earth, shook the room . The water-butt had blown up; the hoops were rent; the staves flew in all directions; and the liberated water went down the drive in a solid wall. Silence reigned for a few seconds. Then all the dogs in Herefordshire gave tongue.’

Schoolboy pranks were not, however, the limit of Elgar’s contribution to chemistry. He took his hobby seriously enough to invent a device for synthesising hydrogen sulfide, which was patented and briefly manufactured as the Elgar Sulphuretted Hydrogen Apparatus. Elgar’s godson claimed that the device was ’in regular use in Herefordshire, Worcestershire and elsewhere for many years.’

Elgar is one of a small, select band of individuals who made recognised contributions to both chemistry and music1,2 (although chemists who are also musicians are a legion). Georges Urbain, best known as the discoverer of the element lutetium, was also a noted pianist and composer. 18th-century musician and composer George Berg conducted extensive experiments in the chemistry of glass-making. But the most famous representative of the genre is Aleksandr Borodin, whose name is still familiar to chemists and musicians alike. As one of the Five, the group of Russian composers that included Mussorgsky and Rimsky-Korsakov, Borodin created a musical idiom every bit as characteristically Russian as Elgar’s was English.

As historian of chemistry Michael Gordin says of Borodin, ’it is the fascination of this hybrid figure that has drawn a great deal of attention to the man, mostly focusing on whether there was some sort of "conflict" between his music and his science.’3 There is good reason to suspect that the conflict was felt by Borodin himself, who seems to have stood accused by both chemists and musicians of spending too long on ’the other side’. ’You waste too much time thinking about music’, his professor Nikolai Zinin told him. ’A man cannot serve two masters.’ Meanwhile, Borodin complained in a letter that ’Our musicians never stop abusing me. They say I never do anything, and won’t drop my idiotic activities, that is to say, my work at the laboratory.’

Rimsky-Korsakov portrayed his friend as literally rushing between his two passions, trying to keep both balls in the air. ’When I went to see him’, he wrote, ’I would often find him at work in the laboratory next door to his flat. When he had finished what he was doing, he would come back with me to his flat, and we would play together or talk. Right in the middle he would jump up and rush back into the laboratory to make sure nothing had burnt or boiled over, all the while making the corridor echo with incredible sequences of successive ninths or sevenths.’

Such anecdotes titillate our curiosity not just about whether a person can ’serve two [intellectual] masters’ but whether each might fertilise or inhibit the other. Yet there is little evidence that scientific knowledge does much more for artists (or vice versa) than supply novel sources of metaphor and plot. The science literacy evident in, say, the novels of Vladimir Nabokov (a lepidopterist) or Thomas Pynchon (an engineer) are a joy to the scientist, but one imagines they would have been great writers in any event. And the ’science’ in Goethe’s works might have been better omitted.

The enduring appeal of these questions has in Gordin’s view unduly elevated Borodin’s chemical reputation. He has been credited with discovering the so-called Hunsdiecker reaction, the decarboxylation of silver salts of carboxylic acids with bromine (sometimes called the Borodin reaction)4, and most importantly with the aldol reaction, the conversion of an aldehyde into a  b -hydroxy aldehyde, which forms a new carbon-carbon bond. The latter is often presented as Borodin’s discovery which was ’stolen’ by the German chemist Charles-Adolphe Wurtz, whereas Gordin shows that in fact Wurtz got there first and that Borodin conceded as much.

Borodin’s priority claim was inflated, Gordin says, because of the desire to cast him as a polymathic musician-chemist. ’His chemistry is at best historically interesting’, says Gordin, ’but not outstandingly so.’ Perhaps this determination to make Borodin ’special’ in the end does more harm than good to the notion that ordinary scientists can be interested in more than just science.