How principled was William Morris? Philip Ball examines the evidence

How principled was William Morris? Philip Ball examines the evidence

Was William Morris, socialist and utopian prophet of environmentalism, a hypocrite? That uncomfortable possibility was raised in 2003 by biochemist Andrew Meharg of the University of Aberdeen, UK.1 Meharg described chemical analysis of one of the famous floral wallpapers produced by Morris’s company in the mid-19th century, which showed the foliage to be printed using an arsenic-containing green pigment - either Scheele’s Green (copper arsenite) or Emerald Green (copper acetoarsenite). A rather more incriminating fact was that the arsenic surely came from the Devon Great Consols mines (originally copper mines) owned by Morris’s family in a business of which Morris himself was a director until 1876. Morris’s immense wealth came partly from these mines, whose operations polluted the surrounding land and left derelict flues that are still hazardous today.

The clincher seemed to be that Morris knew of the claims by physicians that arsenic was toxic, but casually dismissed them. ’As to the arsenic scare’, he wrote to the dyer Thomas Wardle in 1885, ’a greater folly it is hardly possible to imagine. My belief about it all is that the doctors find their patients ailing, don’t know what’s the matter with them, and in despair put it down to the wall papers.’

Once Meharg expanded on this story in a book,2 it seemed that Morris’s reputation was tarnished irreparably. But now the accusations have been challenged by Patrick O’Sullivan of the William Morris Society, who asserts that the situation is by no means so clear cut.3 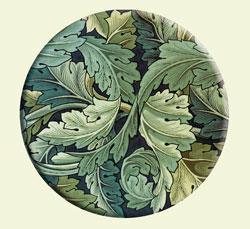 You might wonder if the William Morris Society offers an unbiased voice. But who else would be sufficiently motivated, not to mention well placed, to re-examine what is now widely assumed to be a cut-and-dried conviction? In any event, let’s consider the facts. O’Sullivan points out that the ’arsenic scare’ of the 19th century by no means reflected the consensus of the medical community. Not until 1892 was the odour of arsenic wallpapers linked to the formation of a volatile arsenic compound by the action of a mould that grows in damp conditions. The gas was correctly identified as trimethylarsine only in the 1930s. And a recent review states that this gas is not highly toxic if inhaled, and is unlikely to be produced in significant quantities by the mould anyway.4 So it isn’t clear that poisoning from arsenic-printed wallpapers was at all common in the 19th century - Morris may have been right to suggest that this was a convenient explanation for the multitude of ailments that afflicted people, especially children, during that age.

A man of principle

This, however, does not really absolve Morris. One might expect a man of his espoused principles to have taken seriously any suggestion that his company was making poisonous products, especially considering that the toxicity of arsenic itself was well established - Carl Wilhelm Scheele had felt obliged to reveal this ingredient of his green pigment in the 1770s for that very reason. O’Sullivan points out that Morris resigned as director of Devon Great Consols and sold his shares in the business two years before becoming politically active and six years before putting forward his socialist views. Perhaps, then, he was no hypocrite but realised that his position was no longer consistent with his new ideals?

But that remains a generous interpretation. That Morris was still so confidently denying the dangers of arsenic greens in 1885, without any sound scientific basis either way, somewhat suggests a determination to deny responsibility. And while Morris seems to have treated his workers well, the letter O’Sullivan quotes to justify why he did not make the company a socialist collective is an all-too-familiar refrain from hard-line socialists and Marxists: that such ’palliatives’ merely delay the revolution. Quite aside from the conditions of workers in the wallpaper works, those in the mines (where arsenic was collected as the white trioxide, condensed from vapour) were undoubtedly awful: the safety precautions were crude in the extreme, and arsenic poisoning in copper mines had been known since at least the Middle Ages.

Most troubling of all is Morris’s silence on the matter. If he changed his mind about his business activities, should one not expect some sign of, if not remorse, then at least reflection? O’Sullivan has made a good argument for re-opening the case, but the suspicion lingers that Morris was no more scrupulous than most of us in examining his conscience.