Of all the natural product classes, the steroid family are perhaps the most prevalent in the public consciousness; from cholesterol to testosterone, their infamy inflates the ’science bit’ in countless advertisements. Thankfully, their use as therapeutics redeems their tabloid image, with synthetic and natural steroids applied to a vast array of conditions. 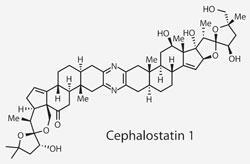 Isolated in 1988, cephalostatin 1 and the related ritterazine B have inspired a lot of interest owing to their potency as broad spectrum antitumour agents - they inhibit growth of around 60 cancer cell lines at low nanomolar concentrations. However, their vanishingly small natural abundance has created a synthetic dependency for further studies, and led to one total synthesis1 before this effort from Matthew Shair of Harvard University, US.2

The briefest examination of cephalostatin’s formidable structure is enough to bring even the most confident of postgraduate students out in a cold sweat. 21 stereocentres contained within 13 rings is bound to be a valuable card in natural product Top Trumps (sadly not a commercial product). But fear not, intrepid chemist, the target is a pseudodimer with the two halves sharing much of their complexity. Better still, the starting materials for each half are readily available steroids, containing a good chunk of the intricacy.

It is fitting then, that the first reaction in the synthesis harks back to the golden age of steroid synthesis, using a literature procedure to partially fragment hecogenin acetate.3  This allowed the group access to C18 - a methyl group requiring oxidation (figure 1). 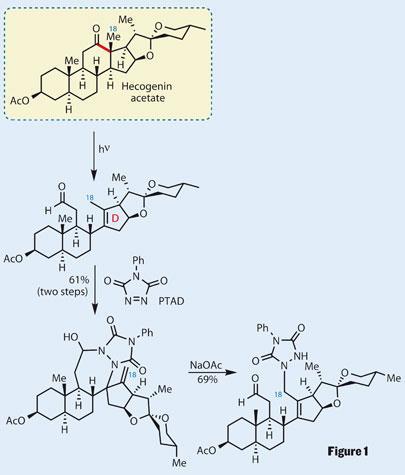 Traditional methods for oxidation of this position were met either with failure or a mess of multiple products, leading the group to a more exotic procedure. The fragmented ring was treated with 4-phenyl-1,2,4-triazoline-3,5-dione (PTAD), which performed an ene-reaction with the D-ring cyclopentene. This oxidised the C18 methyl group to an alkene. Treatment with sodium acetate fragmented this new ring, reforming the aldehyde group and allowing the triazoline heterocycle to participate in a [2,3]-sigmatropic rearrangement with the new alkene and functionalise the C18 position.

A more traditional oxidation was used in the synthesis of the other half of the target, this time starting with trans  -androsterone and using a two-step procedure developed by Bruno Sch?necker - specifically designed to oxidise C12 methyl groups in steroids.4  Firstly, a directing group in the form of a pyridine was attached at the neighbouring ketone via an imine. A witches brew of reagents was then used to perform the oxidation: the first step is reduction of the copper(ii) triflate to copper(i) using benzoin and triethylamine; the copper then complexes with the pyridine moiety and directs molecular oxygen to the site of reaction at C12; a little acid frees the ketone, giving the product in 25 per cent yield (which is pretty good considering the selectivity of the overall transformation).

With this delicate procedure complete, it was time to functionalise the periphery of the molecule by adding the required 5,5-spiroketal. In typical undergraduate exam fashion, a quick study of the stereochemistry shows that the natural product is singly anomerically stabilised, and not doubly stabilised as thermodynamics would prefer. Normally, this might present a synthetic problem, but the team tackled it with ease, delivering the desired spiroketal and adding an extra methyl group in only four steps.

They first employed a Simmons-Smith reaction to stereoselectively cyclopropanate the dihydrofuran ring of an advanced intermediate (figure 2). The allylic alcohol group directs addition to this double bond rather than the cyclopentene. Bromination of the reactive strained cyclopropane ring opened it up, trapping onto a nearby hydroxyl to form the spiroketal and the necessary methyl group (after radical reduction to remove the bromine). The high stereoselectivity was attributed to the neutral reaction conditions, preventing equilibration and thus keeping thermodynamics at bay. Phenomenal work! 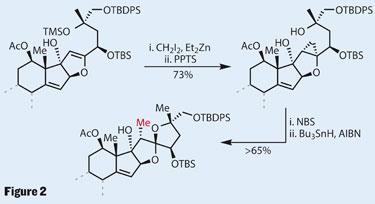 These are only three impressive transformations in what is a stunning synthesis; a late candidate for my ’synthesis of the year’ 2009.