A few years ago I walked into the office of soft matter chemist Susan Perkin and noticed a strange device on her filing cabinet. It consisted of a clear cylinder of Perspex. Inside, there was a clear drum with a handle on top; the space between the two was filled with glycerine. What was it, I asked. Sue took a syringe with food colouring and carefully injected a stream of blue liquid into the glycerine, carefully writing a letter C. She then turned the handle clockwise. As she did so the blue liquid began to spread, the letter blurring until it was unreadable. Then, without a word, Perkin stopped and turned the handle the other way, and as she did so the blue dye gathered itself and the letter was magically restored. My jaw hit the floor; it was the closest thing to a time-machine I’d ever seen. But the device is no toy – it’s a crucial instrument invented by Maurice Couette, one of the fathers of modern rheology. 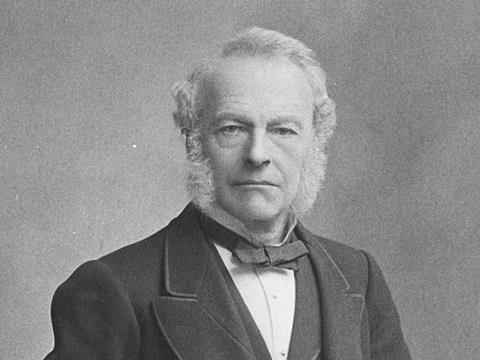 Couette was born in Tours, France, to a family of cotton merchants. His education started at a Catholic school in his home town, before he left to study mathematics and physics in Tours, Poitiers and Angers, where he began lecturing at the newly opened university. After a year’s military service in Paris in 1880, he enrolled at the Sorbonne – while still teaching at a number of Catholic schools – and began to study for a teaching diploma in physics. His studies put him into contact with the physicist Gabriel Lippmann (Chemistry World, September 2015, p38) and the mathematician Joseph Boussinesq. Couette began to look at the work of Claude-Louis Navier who, in the 1820s, had developed the first mathematical treatment of the ‘internal friction’ (viscosity) of fluids.

Navier had not been the first to think about these problems. In his Principia, Isaac Newton had speculated on the motion of a fluid confined between two rotating cylindrical tubes – he predicted that the rate of fluid flow would depend on the distance away from the inner tube. Today we would think of this as ‘Newtonian’ behaviour. A century and a half later, however, Irish physicist George Stokes imagined a similar set up and speculated that under conditions – not least if the inner cylinder were rotated faster than the outer – eddies would begin to develop, greatly affecting the observed viscosity. He also suspected that fluid against the side walls was stationary.

Both Navier and Stokes’ ideas were theoretical. It was not until 1881 that the Austrian physicist Max Margules suggested using the concentric cylinder set-up as a way of measuring viscosity. The inner cylinder would hang from a torsion wire while the second cylinder would be rotated around it. The viscosity could then be related back to the degree to which the wire twisted.

In Paris, Couette began to test Navier’s and Stokes equations, allowing water to flow through glass tubes and developing a careful mathematical treatment to correct for end effects. He showed for the first time that, as Navier and Stokes had predicted, the fluid in contact with the walls was stationary.

Couette also developed Margoles’s idea, and designed and commissioned a device from the instrument maker Eugène Ducretet. The kit had exquisite precision: the radii of the inner and outer cylinders were reported to be 14.6395cm and 14.3942cm respectively. The outer cylinder was rotated using a pulley, while the torque on the inner cylinder could be measured either using the torsion wire or by using an Atwood’s machine, in which the force could be counterbalanced by a weight passed over a pulley.

Unbeknownst to Couette, a young English physicist Arnulph Mallock, one of Lord Rayleigh’s laboratory assistants, developed an apparatus along similar lines, but with replaceable cylinders of different lengths. The apparatus worked beautifully and Lord Kelvin, who saw it in 1895, insisted on dipping a glass rod into the gap between the two cylinders. He was rewarded by a satisfying increase in the torque on the inner cylinder as the resulting turbulence rapidly increased the observed viscosity.

But Couette’s device could operate across a wider range of rotational speeds. At slow speeds the measured viscosity was constant, as predicted by Newton and Navier; but as the speed increased the behaviour suddenly changed and the viscosity increased with rotation rate and resulted in a turbulent flow. Making meticulous correction for imperfections in his apparatus, Couette made measurements for a variety of fluids – his value for the viscosity of air was within 1% of the value determined half a century later. Tragically, because his cylinders were made of steel, he never saw the spectacular dynamics that appeared in the turbulent regime. Working in glass 30 years later, Geoffrey Taylor visualised (and photographed) the intricate patterns of wavy or even spiral eddies in the fluid by injecting ink between the spinning tubes.

Remarkably, Couette’s invention are still used for viscometry, and may have found another use entirely. A recent paper in the Journal of Food Engineering describes a method in which soy protein is not only denatured by the shear forces between the spinning drums, but it also aligns the molecules into fibrils. The result is a solid slab resembling a steak. It’s not quite as exciting as a time machine, but it could widen the textural options for hungry vegetarians.