As the recession bites deeper, what could be in store for academe? 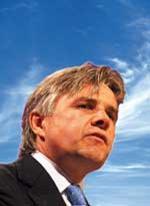 Lord Drayson is calling for a debate over ’blue skies’ research

The economic downturn has claimed some pretty obvious casualties from the world of business. But as the recession bites deeper, what could be in store for academe? Are university-based researchers about to receive a huge windfall? Or could blue-skies research - which by its very nature needs a free reign from government funders - become the next victim?

Governments around the globe are borrowing huge sums to try to spend their economies back to health - and with many world leaders looking to science to pull them out of financial freefall, research spending could rocket as a result. While the US economic stimulus package was still awaiting final approval as Chemistry World  went to press, the National Institutes of Health alone could be in line for an extra $10 billion in funding - a 30 per cent increase to its current budget.

The noises in the UK have also been promising. ’Science is not only the ladder by which we will climb out of the downturn - it is also critical to our success in the upturn,’ UK business minister Peter Mandelson said recently.

However, given the downturn, it’s perhaps not surprising - though no less worrying - that UK science minister Lord Drayson has suggested funding to blue skies research could be cut, to free up cash for the research areas that will most benefit the UK economy (see p5). Drayson’s comments suggest the UK government could break with years of ’hands off’ tradition and start directly interfering with funding decision making.

At such economically troubled times, it certainly doesn’t hurt for scientists to show they’re using their funding effectively, and are continuing to generate a good return on investment. But does Drayson really believe that attempting to focus research on particular projects would be an effective way to secure the biggest economic output?

At one level, the idea of focusing funding on something like life sciences, and becoming the envy of the world in that area, has a certain attraction. And funding to other areas wouldn’t be cut entirely - Drayson has been at pains to emphasise that excelling at any one discipline means having strong science research across the board.

But the fundamental issue with any directed approach to funding is that research is inherently unpredictable - the whole purpose of running an experiment is because the outcome is unknown. Despite continual threats, blue skies research repeatedly proves its worth - both scientifically and economically - precisely because of the unexpected advances it turns up.

Could a particularly visionary research director secure an economic pay-off by pushing certain financially promising strands of research? Perhaps, in the short term, but surely at the expense of long term success. Without supporting blue skies research, where will the next true step changes in science and technology come from?

Another obvious problem with any such discussion is how to measure the relative economic payback of different areas of research. The importance of pharmaceuticals to the UK economy is clear - prompting prime minister Gordon Brown to meet with pharma industry leaders to discuss deals that would keep research and manufacturing in the UK. But perhaps one of the strongest ties big pharma firms have to the UK is the strength of their relationship with the UK academic organic chemistry community - and how do you put a value on that?

While the exact impact of the downturn on academia is uncertain, the key - as ever - is to be involved in the debate.