Chemical site security should be broadened to include natural disasters.

Recovery work is under way following the devastation caused by Hurricane Katrina across the US Gulf Coast. But now is also the time to review policies and procedures to ensure a better response to potential future disasters.

The flood water in New Orleans is receding but monitoring is showing that it is contaminated. The US Environmental Protection Agency (EPA) reports that hexavalent chromium, arsenic and lead levels are above those allowed by its drinking water standards. Slightly elevated thallium levels have also been reported, but the EPA says these are below those at which there would be a health impact. E. coli levels are also greatly elevated, says the EPA. As a result, it has advised people to avoid contact with flood water. 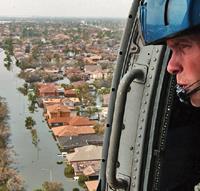 The focus of the early relief and recovery work has rightly been on the people who have suffered as a result of the hurricane. It is not yet clear how much environmental damage has been done.

Some of the pollution will be the result of damage to the chemical and petroleum facilities in the area. The hurricane forced most chemical plants in southern Louisiana, Mississippi and Alabama to close.

The American Chemistry Council (ACC) says that its members are committed to protecting the Gulf Coast environment in the wake of Katrina.

It says that members responded well, helped by the Responsible Care security code to which they adhere. This was adopted after the terrorist attacks on 11 September 2001 and it aims to ensure chemical facilities are secure against terrorist threats.

But the ACC says it also helped in this instance. ’Security is a mindset and a process’, it says. Many of the steps taken under the code to enhance security and develop effective emergency response plans helped the industry withstand the hurricane. Although plants were impacted by the storm, they had already been shut down. This minimised long-term damage to the facility and the local area and has made it easier to restart operations, says the ACC.

The ACC is pushing for chemical site security legislation to ensure that all facilities, not just ACC members, that handle, store, ship or produce chemicals address security.

But perhaps this should go further. Facilities based in hurricane-prone areas already take that threat into account, but what about those in other areas and what about other threats?

The security code could be extended to cover natural disasters and all facilities should be obliged to comply.

President Bush has committed to reviewing emergency plans in every major city in the US, stating that they must have plans for responding to natural disasters and disease outbreaks, as well as terrorist attacks.

The chemical industry should take this as a cue and ensure that the security code is broadened to cover all possible scenarios, and continue its effort to get it into legislation, and not just in the US.