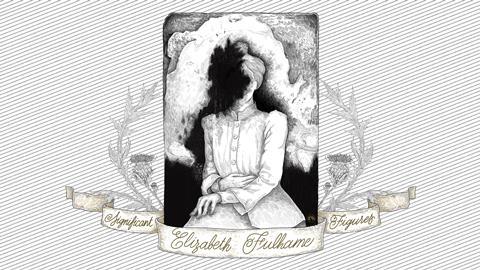 More than 200 years ago, a female chemist introduced the concept of catalysis and made early steps towards photography. Rachel Brazil develops her story

The discovery of catalysis is usually attributed to Swedish chemist Jons Jakob Berzelius in 1835. Although he named the phenomenon, the underlying principle was first described 40 years earlier by Elizabeth Fulhame, a Scottish chemist who remains largely uncelebrated for her remarkable experimentation and chemical theorizing. Historians Marelene and Geoffrey Rayner-Canham argue in their 1998 book Women in Chemistry that Fulhame was ‘the first solo woman researcher of modern chemistry‘. She disagreed with many of the leading scientists of her time and with hindsight was very often on the right side of the scientific debate.

Fulhame only published one book in 1794, with the long-winded title An Essay Of Combustion With A View To A New Art Of Dying And Painting Wherein The Phlogistic And Antiphlogistic Hypotheses Are Proved Erroneous. The work describes her 15 years of meticulous experimentation into basic chemistry and the wider theoretical conclusions that she drew.

We know little about Fulhame except that she lived in Edinburgh and was married to an Irish doctor, Thomas Fulhame, who was himself studying chemistry at the University of Edinburgh under the tutelage of Joseph Black. Here, he would have covered the chemical properties of metals and their salts.

In 1780 Elizabeth Fulhame became interested in studying dyeing processes with the view to chemically infusing cloth with gold, silver and other metals. She experimented with dipping silk threads into metal salts, then exposing them to light. According to her book, her husband and friends scoffed at her experiments, but she persisted, developing a basic form of photochemical imaging. She converted metal salts into pure metals using phosphorus, hydrogen, charcoal and sunlight, deposited them as thin layers of gold, silver, platinum, copper and tin. She recorded the results of 127 of her experiments.

A range of beautiful and unexpected colours emerged from her experiments

Her work may have remained a private pursuit but in 1793 she met chemist Joseph Priestley in London who encouraged her to publish her findings. In her book’s introduction she lays out how she disagreed with the theories of at least six leading chemists, including those who supported the popular phlogiston theory of combustion. This suggested that a fire-like element phlogiston was contained within combustible material and was released into the air during combustion, to be absorbed by plants. By the 1770s the phlogiston theory had come under scrutiny with French chemist Antoine Lavoisier’s showing that some elements’ mass increased when burned. He therefore suggested oxygen was being added.

Fulhame‘s work pointed in this direction. She concluded from her experiments that coal burned better when drops of water were added, which would not fit with the phlogiston theory. Lavoisier had shown that water was made of oxygen and hydrogen and Fulhame suggested that the coal reacted with water first to form carbon dioxide and hydrogen, with the hydrogen then reacting with oxygen in the air to form water. But Fulhame’s results didn’t completely fit with Lavoisier, whose theories of reduction did not fit with the idea that Fulhame posited for the role of water.

Her discovery is the first description of catalysis – speeding up a reaction with a substance that doesn’t itself get consumed. Water was required in the reduction reactions she observed, but is ultimately regenerated.

Fulhame’s phororeduction process also laid the foundations for the birth of photography 50 years later. She noted that gold dissolved in aqua regia (a mixture of nitric and hydrochloric acid) could only be reduced back to its metallic state in the presence of light, a rehearsal for the early photographic plates coated with silver nitrate. A range of ‘beautiful and unexpected colours’ emerged from her experiments, says Lindsay Smith, from the Centre for Photography and Visual Culture at University of Sussex. Fulhame suggested that her method could be used to colour maps – the rivers to be represented in silver and cities in gold.

Her role in early photography was not completely overlooked by those who came after her. John Herschel, inventor of the blueprint (based on ferric ammonium citrate and potassium ferricyanide), referred to her work in his 1839 landmark Royal Academy lecture and his work in turn prepared the way for later inventors such as Louis Daguerre and Henry Fox Talbot.

Unlike some women of her era, she was not completely overlooked by the male scientific establishment of her day. Her book was called ‘ingenious and lively’ by the physicist Benjamin Thompson (later Count Rumsford) who established the Royal Institution. In 1798 it was reviewed in a French journal and translated into German.

By 1810 it had made its way to the US and was republished by the Chemical Society of Philadelphia, a society ‘we know very little about’, says historian Jessica Linker from Northeastern University in Boston, US, who has been studying women’s participation in science in 18th and 19th century America. ‘It seems to have been an organisation for folks who are associated with university teaching or college teaching,’ she adds. The new edition of Fulhame’s work included an unusual preface by an unknown editor stating that the work deserves more attention, and that ‘Mrs Fulhame has now laid such bold claims to chemistry that we can no longer deny the sex the privilege of participating in this science also’.

Linker’s research would suggest that Priestley, who moved to the US in 1794, was a member of the society and is likely to be the reason for Fulhame’s work being so warmly embraced by the society. ’I think they genuinely appreciated her treatise,’ says Linker, but she adds Priestley probably had his own motivations for promoting her work, given that she presents evidence contradicting a number of competing scientific theories. ’I think he sees this as a challenge to Lavoisier,’ explains Linker. Lavoisier’s ideas contradicted those of Priestley who was still a proponent of the phlogiston theory. ‘But really, she’s challenging both of them,’ Linker adds.

This eventually seems to have become clear to Priestley, who at some point changed his mind and withdrew support for Fulhame. ‘Her theory is fanciful, and fabulous, as the story of the phoenix itself,’ he wrote. He had published a new concept that ‘dephlogisticated air’ (which is now known to be oxygen) consisted of water plus the ‘principle of acidity’, but Fulhame’s idea that water is only a catalyst in oxidation and reduction reactions would not support this.

Nevertheless, Fulhame was awarded honorary membership of the Chemical Society of Philadelphia, which must have been unusual at that time. ‘I don’t know to what extent she actually was involved or knew that they were making her an honorary member,’ says Linker. ‘Women really aren’t let into societies as members until the 1830s and 40s in Philadelphia, and only in relatively small numbers.’

Trying to assess her contributions to chemistry is difficult. Not all of her ideas turned out to be correct. She believed water was required for all reductions and that nature maintains an equilibrium by preserving the quantity of air and water on the surface of the globe. But as Linker points out, many of the scientists we remember as great today did not get everything right, or fully understand their discoveries in the way we would understand them today. Priestley is a good example of this, co-discovering oxygen but not fully understanding its nature. ‘We are far more likely to credit men with these sort of discoveries when they’re partially wrong, we can make that exception for them,’ says Linker. We should give the same allowances to Fulhame and put her discoveries in their 18th century context.

Overall Fulhame was ahead of her time. She seemed to have developed a more modern understanding of chemistry than some of her contemporaries, such as understanding the dynamic nature of oxidation and reduction as well as the concept of catalysis.

But after some initial interest, memory of her work faded and she has remained a neglected historical figure. In her book on Victorian photography, Smith commented that the neglect ‘owes much to the fact that Fulhame was female… stories of “great men” – and the equally “great” rivalries among them – have tended to drown out, or assign to the periphery, other voices’.

From her studies of US history, Linker suggests it may be time to reassess our ideas on women’s contribution to 18th and 19th century science. She points to evidence that in Philadelphia women were educated in the practical and domestic applications of science, but ultimately their contributions to various scientific fields were hidden. ‘They’re just a lot of factors that were at play that obscure women’s work, but I tend to think that they are involved in sciences.’

Fulhame may be the rare example of a woman whose achievements we are able to trace. ‘We should think about her as a woman operating in a particular context at a particular time and use her to gauge in what ways women were allowed to be scientists, or allowed to be acknowledged as scientific practitioners,’ says Linker.

In the preface to her treatise Fulhame wrote ‘For some are so ignorant, that they grow sullen and silent and are chilled with horror at the sight of anything that nears the semblance of learning, in whatever shape it may appear; and should be the spectre appear in the shape of a woman, the pangs which they suffer are truly dismal.’ Smith describes this as ‘a proto-feminist account of her motivations for publishing’.

It is also interesting that Fulhame’s publisher was Joseph Johnson, a liberal publisher known for publishing Thomas Paine and Mary Wollstonecraft. He also published Joseph Priestley, which may explain the choice. She did seem herself to have been conscious of the rarity of her position, calling her work a ‘beacon to future mariners’, and describing the resistance she experienced to her ideas or perhaps to expressing her ideas, with the phase ‘this little bark of mine has weathered many a storm’.

Although she remains a mysterious figure, her contribution to chemistry can be gauged from her published work. This clearly shows her as a tenacious experimentalist, but also an inspired theorist willing to question and contradict the paradigms of her time. Although an amateur, her conclusions came from a rigorous commitment to the scientific method. As she herself explained, ‘Every opinion must stand and fall by its own merits, I venture with diffidence to offer mine to the world, willing to relinquish it as soon as a more rational appears.’