A giant rotary evaporator is a mesmerising thing, says Chemjobber, but the plant requires a different approach 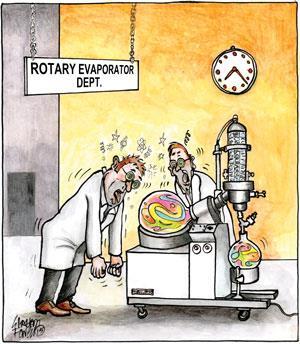 The separating funnel might be the most fun of all laboratory glassware. A completed reaction and organic solvent are poured in, some kind of aqueous phase is added to remove salts or other inorganic impurities, the stopper is closed and the shaking begins. The shake-shake-shake agitation mixes the two immiscible layers (try not to dance while shaking – it’s nearly impossible). After a quick turn of the stopcock to release any pressure, the aqueous layer is drawn off and, if one is wise, carefully set aside and labelled.

Once the product is extracted into the organic layer, how will our chemist obtain it, free from the inevitable dissolved water? A common technique is to add a drying agent, usually magnesium or sodium sulfate. With a quick swirl, the drying agent absorbs the water, leaving the solution ready to be filtered and evaporated to reveal the crystals within.

The common way to remove solvent in the laboratory is with the humble rotary evaporator. Every lab in a movie or TV show must have one – they are truly visually appealing, with their spiralling condensers and rounded bump bulbs. Applying a vacuum lowers the solvent’s boiling point to that of a warm water bath, and distillation commences. When the evaporation is complete, you scrape crystals off the flask’s sides.

There is an intermediate step between the laboratory and the plant – commonly called the ‘kilo lab’. To a bench chemist, the five litre flasks and 70cm spatulas found here must seem unusually large, but there is nothing more Brobdingnagian than the 20 litre version of a rotary evaporator. Instead of a 250ml flask that fits in the palm of your hand, these flasks need both arms to carry and a special set of clamps to secure to the rotavap.

In a past kilo-lab life, having added sodium sulfate to an open plastic barrel of wet reaction solution, I stirred it with a big plastic stick to make a slurry. After 30 minutes to let the drying agent work, I dropped a cloth-covered suction line to the barrel and turned on the giant rotary evaporator to draw up the dried solvent to be distilled off. It’s faster than pouring the slurry through a filter, if a little less elegant.

Evacuating such a large rotavap (they can be well over six feet tall including the condenser) can take lots of time. If your rotavap is set up with the requisite hoses and seals, you can use the vacuum to draw in more solution as the solvent is being distilled off.

While a 20 litre rotavap is filling itself from a 100 litre tub of product dissolved in solvent, evaporating off solvent and collecting it for waste disposal, it is possible for the chemist to become distracted. It’s mesmerising, to be sure, but employers do not pay for hypnotised chemists. Once, I decided to help some coworkers move solvent drums, only to return and discover that the rotavap had zealously overfilled itself. It took over 20 minutes to carefully remove the extra 30 litres of solvent I had accidentally pumped into every last crevice of the poor rotavap.

There is nothing more Brobdingnagian than a 20 litre rotary evaporator

A kilo-lab chemist can distil off many tens of litres in a sufficiently sized rotavap, resulting in at least a kilogram or two of product. Scraping this out of a flask is a real job, requiring some physical effort to remove every last gram.

In the plant, drying agents are rarely used to remove water. Imagine the effort required to get rid of a few tonnes of flammable solvent-laden magnesium sulfate hydrate! Neither is there a gigantic rotary evaporator to spin a 1000 litre flask in a slow, slow circle, with an equally gargantuan water bath to warm it.

Rather, the reactor plays multiple roles as reaction vessel, separating funnel and evaporator flask. The reactor jacket is filled with warm fluid (varying from water to steam to solutions of ethylene or propylene glycol), and the solvent contents are slowly distilled away under vacuum, while the agitator turns. Careful solvent selection allows water to be removed by forming an azeotrope in the vapour.

As an impatient process chemist watches from the sight glass above, the solution will slowly become opaque as it gets more concentrated (and in the companion vessel, distillate will be flowing in, first as drops, then as a torrent). Crystals can form in a flash, sometimes announcing themselves with a slight exotherm. Our excited process chemist can ask for the distillation to stop, and the solution can be cooled to allow the crystals to grow. The crystals will stay in their slurry and can be sent to a centrifuge to be filtered – after all, there is no 10-foot spatula to scrape the sides of the reactor!