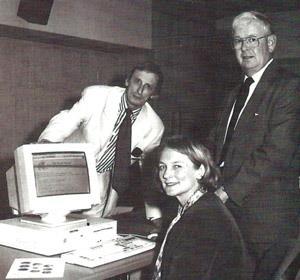 The RSC launched itself into cyberspace this summer by setting up its own server on the World Wide Web – it plans to develop the Web server as a major information resource for chemists on the internet. The launch ceremony at Thomas Graham House in Cambridge was attended by local MP Anne Campbell, a member of the House of Commons Science and Technology Select Committee, and a number of distinguished chemists.

In addition, a new consortium called Clic, which is a venture between the RSC, Imperial College London, Leeds University and Cambridge University, is to develop an electronic version of the RSC’s flagship journal Chemical Communications for the Internet. The first stage will deliver electronic graphical abstracts of the communications, hyperlinked to molecular three-dimensional coordinates and other numerical data. As the project develops over the next three years, entire communications from the journal will be made available and the group will address issues such as security, user validation, cost recovery mechanisms, and peer recognition. The ultimate goal is to develop a form of chemical communication that has no printed equivalent. Scholarly scientific work will be transformed into an interactive and highly visual experience.