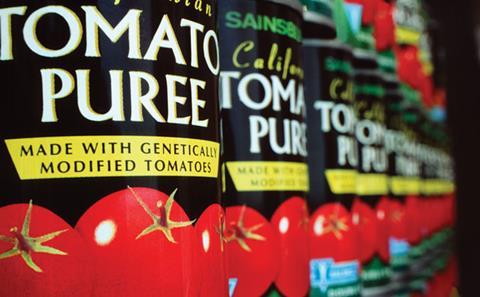 Genetically modified (GM) tomato puree has recently become the first whole food produced from a GM crop to be sold in the UK. The puree has been developed by Zeneca Plant Science and is on sale in selected J. Sainsbury and Safeway stores from this month.

A statement on the cans will inform customers that the product has been produced from GM fruit and that this reduces waste and uses less energy in the production process; the new product will be offered alongside its non-GM counterpart.

The genetic modification involves slowing down the action of polygalacturonase, the enzyme that causes the fruit to rot. Subsequently more of the natural thickener, pectin, is retained and this results in less wastage and higher paste yields. If the new puree takes off, Zeneca is planning to produce GM tomato pastes and ketchup.

Ed. Despite initial popularity with consumers, commercial pressures generated by public concern about GM foods early in 1999 forced Sainsbury’s to announce that it would withdraw the product from sale, and stocks were exhausted by July 1999.