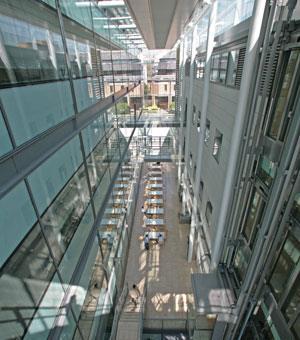 Inside the Chemistry Research Laboratory

Chemistry researchers at the University of Oxford move into a new £60m laboratory this month. The lab’s unashamedly robust aim is to nurture spin-out companies focused, at least initially, in three areas: chemical and molecular biology; synthesis and molecular design; and surface and interface science. And there’s the rub. Oxford has attracted attention and envy in equal measure for the unusual way in which it paid for its new Chemistry Research Laboratory, sited in the centre of the university complex. A controversial one third of the funding comes from a City bank. In return the bank has secured an equal share in the university’s stake in any spin-out, which is typically 25 per cent of the equity, for 15 years.

This arrangement does not dent researchers’ rewards, insists Graham Richards, who chairs the university’s chemistry department.  In fact, he says, researchers benefit because they will still receive a 25 per cent stake in any company they set up and the bank’s presence has made them ‘much more sensible about patenting things than they used to be’.