Early experiments were a tricky business without basic apparatus

We chemists love tapered joints – cone-shaped parts that fit together as in glass stoppers, glass taps, cone-and-socket joints, and so on. And yet it is only relatively recently that they entered and transformed chemistry. When Sherwood Taylor described chemical apparatus in a 1930s book for lay readers, he included bark corks. The great chemical writer Primo Levi extolled the ‘mark of the chemist’. This was a hand bearing a scarred palm, caused by attempts to push a sharp piece of glass tubing into a cork or a stopper. When I learned my chemistry in the 1960s, I was once advised to lubricate a bit of glass tubing with glycerol before trying to insert it into a hole in a stopper. 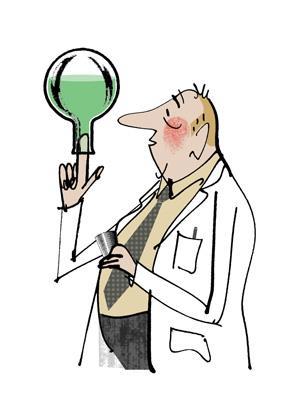 Nowadays, shallow tapers have transformed everything. We handle ‘B14’, ‘B19’ etc, cones and sockets all the time and think nothing of it. (The widest part of a B14 taper is 14mm, and so on). The taper has three mighty virtues. First, as a rotationally symmetrical object, it is readily made by rotating machinery. Second, a virtue seldom significant to us chemists, but very important to engineers, it ensures absolute concentricity between the matching parts it joins. That is why a lathe is often equipped with a tapered ‘collet chuck’ clamp, and why the centres used for precise machining are tapered to fit exactly into the stocks of such a lathe. Perhaps for chemists, the most important virtue of the taper is its precise fit. A ground glass tapered joint is almost perfectly leak-proof. With a small smear of grease, it can even resist a full vacuum. The holding force exerted by a cone in its matching socket can be surprisingly strong, sometimes irritatingly so. Many of us will have been annoyed by the huge effort needed to release a conical glass stopper stuck in a bottle.

Alchemists and old-style chemists had the opposite problem, and experienced a lot of trouble joining bits of apparatus together. Before even the advent of corks and stoppers, practical chemistry was very difficult. Various ‘lutes’ were used to stick chemical glassware together: one such was a mixture of lime and egg white. This goo slowly hardened when it got hot, and resisted several chemical reagents fairly well, although it must have added to the messiness of the whole enterprise. In an age of convenience, where lab essentials like stoppers are never more than arm’s reach away, it is hard to imagine that much of our mighty chemical knowledge was painfully puzzled out with apparatus that we would now regard as absurdly primitive. Even rubber tubing was a mighty advance when it came. I recall the old-style condensers in which the central glass tube was fastened to its cooling jacket by small lengths of rubber tube. The invention of Mohr’s clip, which could close rubber tubing, transformed titration (indeed, the first burettes were pretty much measuring cylinders from which you could pour a fairly precise volume). As lab gadgetry gets more sophisticated, increasingly computerised and ever-more costly, we should never forget how much we owe to something as simple as a stopper.