In situ with Fraser Stoddart

On rotaxanes, travel and his love of Edinburgh 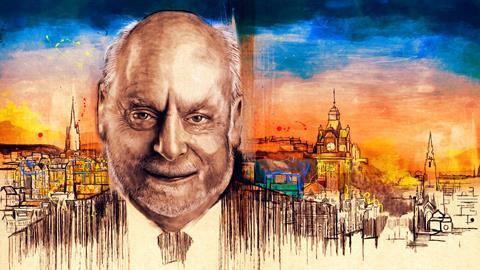 Fraser Stoddart is a professor at Northwestern University, US. In 2016 he was awarded the Nobel prize in chemistry with Ben Feringa and Jean-Pierre Sauvage for his work on molecular machines. He was speaking to Kit Chapman

I travelled 365,000 miles last year, so a thousand miles a day. If you do a quick calculation, even when I’m sleeping I’m averaging 40mph. That’s brought about by satisfying less than 10% – probably 5% – of the invitations I get from around the world. I’ve got to the stage where my diary is full for 18 months.

The Edinburgh Festival got me into classical music. All the stars in the 1950s/60s came to Edinburgh – I crossed paths with Dmitri Shostakovich and Maria Callas. I just took it as normal when I was in my teens and early 20s, but looking back now I realise how privileged I was. I got as far as playing the first two movements of Beethoven’s first piano concerto: that was enough to tell me I was never going to be a concert pianist.

I enjoy cooking, although that’s been curtailed because of the travel. I used to cook for my research group, which was 50 or so people, every six weeks. I mainly used my experience from my mother, so it was Scottish fare: joints of lamb, beef and so on, with a different selection of vegetables. I don’t have the time to do it now, since I would need to be home for three or four days, then a whole day of tidying up afterwards.

I’m an art collector. I’ve got a lot of Paul Kenton‘s paintings; he’s made quite a reputation for himself and I have a few of his earlier works. I’m interested in urban art, where he takes a scene in London, New York or Paris and paints with an abstract touch. I commissioned him several years ago to do Edinburgh; I’ve got seven or eight of what I call his Edinburgh collection. The only disappointment was he didn’t go down into the New Town.

Brexit is a total disaster. I’m beside myself about what could happen, it’s incredibly depressing. I wake up in the morning and think ‘Did I have a bad dream?’ No, it’s real. The UK is served by some of the most incompetent and stubborn politicians the country has ever seen. Complete nincompoops! I’ve met President Xi and Premier Li of China, and they are very smart people – the president graduated from Tsinghua University in Chemical Engineering and majored in organic chemistry and the premier amazed me with his knowledge of the Scottish Enlightenment! The contrast with political leaders in the UK is night and day.

I met my wife when she was assigned to my lab. She then went into biochemistry, but she was always an order of magnitude smarter than me – she won all the prizes. That was never forgotten in the family, she’d bring me down to size. She was never the academic wife who doted on her husband; when other wives were talking about their husbands in glowing terms, her eyes would roll and say ‘I’m married to a bit of an idiot.’ She was quite successful in getting that spirit over to our two daughters!

Every year I go to the south west of Scotland, to Portpatrick in the Rhins of Galloway. My wife used to try and dissuade me from bringing my brown envelopes full of work with me. Once I surreptitiously stacked a few under the driver’s seat… I always had work tucked away in the car in a place she couldn’t find it.

It’s -28°C in Chicago as we’re talking in February. I feel like I’m in a prison. In the UK, every winter the back door of our house would swell up because it was wood and wouldn’t close. Here I have a steel door, and because of the difference in temperature it has shrunk and warped, so there’s now a great big gaping hole through which very cold air is coming in.

The intriguing thing about chemistry is that it’s a science full of areas of grey. I’m pretty adamant rotaxanes are a bit whimsical. The simplest rotaxane is a dumbbell with one ring. As we showed 20 years ago, one can engineer situations where the ring will stay on at low temperatures but, if you heat the rotaxane in solution, the ring will slip off the dumbbell. I see the rotaxane world as one where it can be both molecular, or under different conditions, become a complex or supermolecule.

Fraser Stoddart is a professor at Northwestern University, US. In 2016 he was awarded the Nobel prize in chemistry with Ben Feringa and Jean-Pierre Sauvage for his work on molecular machines. He was speaking to Kit Chapman