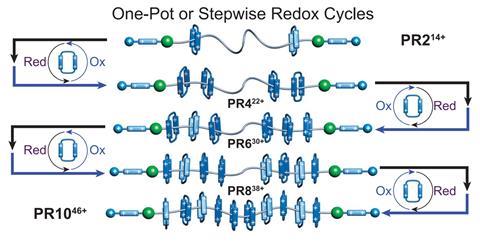 A synthetic molecular machine that can pump rings from solution onto molecular strings to produce polyrotaxanes with a precise numbers of rings has been created. The approach enables a degree of control that simply wasn’t possible before, opening the way to new materials for energy and data storage.

Polyrotaxanes have complex architectures and unusual properties, which makes them interesting targets in synthetic chemistry. But making these materials isn’t easy. Although some control over the numbers and densities of rings surrounding the polymer axles has been achieved, efficient synthetic protocols to produce structures with precise numbers of rings are still missing.

An international research team working with Nobel laureate Fraser Stoddart at Northwestern University, US, has now built a molecular machine that can do just that. The new polyrotaxane synthesiser, which consists of a polyethylene glycol chain with redox-driven molecular pumps attached on both ends, can deliver two charged macrocycles at a time, leading to the precise incorporation of up to 10 rings.

Stoddart points out that by exactly controlling the number of rings in polyrotaxanes, it could be possible to tune their properties for particular applications. ‘There is also the fact that we can encode the polyrotaxane with different rings in a palindromic fashion, for example, ABCDEEDCBA,’ he says. ‘So, we have a new way of data storage.’

The machine can be powered using electricity or chemicals. During the reduction phase, two rings are drawn onto the pump heads from the bulk solution. Then, upon oxidation, they’re pumped over a chemical ‘speed bump’ onto the polymer chain. The total number of rings can be controlled by varying the number of redox cycles.

Dean Astumian of the University of Maine, US, who was also involved in the study, explains that the bulk solution and collecting chain are compartments separated by pumping cassettes on either end of the molecule. ‘When subjected to cycling of the conditions, the cassette operates as an energy ratchet to pump the rings to a very high potential energy on the collecting chain.’

David Leigh, a supramolecular chemist at the University of Manchester, UK, notes that this is an exciting application of molecular machines. ‘The incorporation of ratchet mechanisms into molecular structures is one of the most important advances in molecular machinery to date,’ he says. ‘It allows molecules to be more than just simple switches, to actually perform complex powered tasks. This is a great example of the sort of thing ratchet mechanisms can accomplish.’

Emillio Perez of IMDEA Nanoscience, Spain, agrees. ‘The beauty of the system relies in the delicate dance of kinetic barriers going up and down in perfect synchrony at the right times, which allows the pumping mechanism to be directional,’ he says. ‘This degree of control is rare and basically a dream come true for polyrotaxane synthesis.’

The researchers believe that significant amounts of energy could be stored in such systems. ‘Since we are building up charge by eight-plus units every time the dual pump completes a full redox cycle, we can put a massive amount of charge onto a polymer chain,’ says Stoddart. ‘If we can work out how to unleash this charge in a controlled manner, we would have the prototype of an all-organic battery. However, we are not there yet.’

The new approach doesn’t rely on specific non-covalent interactions between the chain and the rings, so now almost any polymeric axle can be used, and longer polymers could host more rings and charge. Co-author Yunyan Qiu says he’s already working on biodegradable polyesters, polycarbonates and polypeptides to show that almost any polymer can be used. The team is also optimising the electrochemical approach. ‘It could lead to almost autonomous or semi-autonomous electrical production of polyrotaxanes with minimum human operation by using computer programs to control the redox potentials,’ Qiu says.