Rotaxane–gold complex is in good shape for catalysis 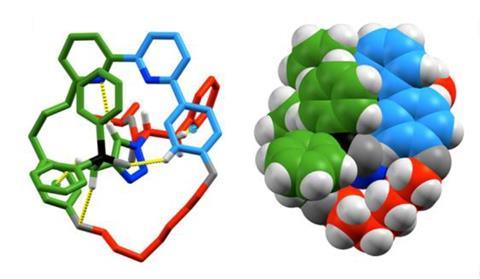 Mechanical chirality could soon find a place in catalysis, offering new ways to make important molecules, UK scientists say. The team has created a gold complex incorporating a mechanically planar chiral rotaxane and used it to mediate an organic reaction, demonstrating the potential of using mechanical bonds for selective synthesis.

Chiral compounds exist in two mirror-image forms – just like our left and right hands. As a molecule’s shape has a great deal of influence on its chemical behaviour, being able to make one ‘hand’ of a compound is very important in chemistry. To do this, researchers normally use catalysts that are themselves chiral. ‘In this work, we use a type of molecule – called a rotaxane – that can be chiral not due to the chemical bonds between atoms but due to something called a mechanical bond,’ explains Stephen Goldup of the University of Southampton who led the study. Rotaxanes are interlocked molecules consisting of a macrocyclic ring trapped on a dumbbell-shaped axle. ‘If the ring and axle have the right symmetry properties, then when combined in a rotaxane, the structure is chiral.’

The researchers synthesised a chiral rotaxane that can bind a gold ion. ‘Using this catalyst, we were able to selectively make one “hand” of a cyclopropane product,’ Goldup says. ‘This is the first time that this type of mechanically chiral rotaxane has been used in catalysis.’ During the synthesis, the gold ion first reacts with an acetylene to form a reactive intermediate – a gold carbene – which then reacts with styrene to form the cyclopropane product and regenerate the gold catalyst. ‘Because the gold carbene is bonded to the rotaxane, it is held in a “chiral pocket” created by the mechanical bond,’ explains Goldup. ‘This means that the pathways that lead to the two hands of the cyclopropane take place at different speeds, so one hand of the product is formed selectively.’ The selectivities demonstrated by the rotaxane catalyst were comparable with the best ones for this reaction. 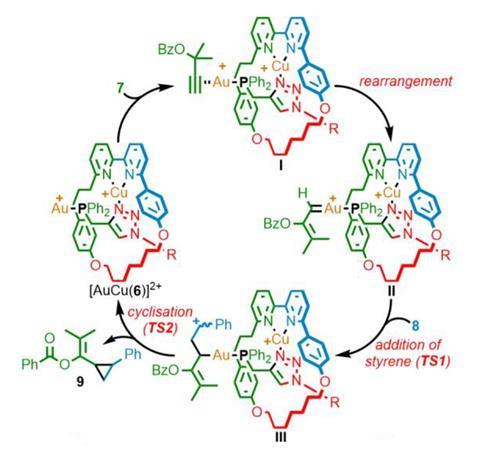 Proposed reaction pathway for the stereoselective formation of a cyclopropane product by the rotaxane catalyst, where 7 is a benzoyl ester and 8 styrene

Nobel laureate Fraser Stoddart of Northwestern University, US, who was not involved in the study, calls the work ‘a tour de force’. ‘This brand-new chiral gold catalyst is comparable with traditional gold catalysts and its decedents could well find application in the pharmaceutical industry, where more than 50% of the drugs on the market are chiral products,’ he says. Stoddart also points out that the reaction space and confinement that is offered by mechanically bonded architectures resemble the structural hallmarks of enzymes. ‘In the fullness of time, mechanical catalysts might begin to vie with nature’s catalysts where supramolecular catalysis has failed to live up, by and large, to its initial promise,’ he says.

Alberto Credi at the University of Bologna, Italy, agrees that mechanical chirality could open up new opportunities in selective catalysis. ‘The results reported in this exciting proof-of-principle study were obtained on a specific chemical reaction under particular conditions. The new element of this work is that the catalyst is not a molecule or a simple coordination compound but a mechanically interlocked molecule,’ he says. ‘This looks promising for designing catalysts endowed with chiral pockets.’

However, chiral rotaxanes are hard to synthesise. ‘Work from our group has led to new, efficient ways to make these molecules, but even with all of our efforts over the past years, making mechanically chiral structures for use in catalysis is still challenging,’ Goldup says. Stoddart agrees: ‘The design and synthesis of these enzyme analogues is far from being straightforward at this time,’ he says. ‘Although mechanically chiral compounds are still demanding to make, the first example reported by Heard and Goldup gets the chemical community off to a flying start. Now begins the process of working out how far they and others can take their research.’