Rather than axing his chief scientific adviser, the next president of the European commission should enhance the role

In an increasingly complex world, it is hardly surprising that science advice is a growth industry. This was underscored at the end of August, when scientists and policymakers from more than 40 countries gathered in New Zealand to share their experience at the first Global Conference on Science Advice to Governments.

But if a coalition of non-governmental organisations has its way, the next time this conference is held it won’t be attended by the European commission’s chief scientific adviser (CSA). 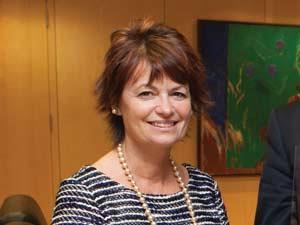 Will Anne Gloverâ€™s role be continued?

The coalition, which includes Greenpeace and Friends of the Earth, is calling for the position to be scrapped after just a single incumbent – microbiologist Anne Glover – claiming that it is dangerous to place too much power in the hands of an unaccountable, unelected scientist. Politicians should get their science advice from a diverse pool of stakeholders, they argue, rather than being filtered through a single person.

Despite this criticism, the role is probably secure. Incoming president Jean-Claude Juncker said in July that he would appoint a CSA, although more recent statements from his staff suggest that he will make a decision once he takes office on 1 November.

The question for Juncker, however, should not be whether to keep or abolish the post, but how he is going to strengthen the role.

Who you gonna call?

The UK government has had a CSA for 50 years, and today there is one in every department. Yet the equivalent post is absent in most other European governments, so Glover’s appointment seemed to be clear evidence that the commission’s current president, José Manuel Barroso, was committed to giving science a more prominent role in policy discussions.

Since her term began in January 2012, Glover has been a staunch advocate for evidence-based policymaking. She is smart enough to accept that in a democracy, science will not always be the prime consideration behind a policy. But she has demanded that politicians be more honest about their decisions, rather than misstating the weight of evidence on climate change or GM crops in order to justify political positions.

Glover has established various ways of achieving that, including the President’s Science and Technology Advisory Council, which offers foresight about the translation of science and technology to industry.

And while she is quick to say that the CSA model doesn’t suit all countries, that hasn’t stopped her from trying to convince governments that they need somebody to be a conduit for sharing and disseminating scientific advice.

This summer she unveiled the European Science Advisers’ Forum (ESAF), a network of scientists from 14 European countries who are effectively CSAs in all but name. One benefit, she predicts, will be that each member state can quickly find out how others are acting in response to an urgent issue, before corralling the relevant experts and funnelling their advice to the people who need it. As John Beddington, a former UK CSA, reflected last year: ‘Sometimes it helps just knowing who to call in a crisis.’

The commission already has access to plenty of science advice through organisations such as the Joint Research Centre (JRC), the commission’s in-house science service that has a staff of about 3000 people across Europe, as well as the science advisory bodies of various regulators. These deliberative bodies can take months or years to deliver their reports, and for long-term policy questions that is entirely proper.

But in the day-to-day business of government, a CSA can act as an ambassador for evidence, clarifying where uncertainties lie and highlighting where there is broad scientific consensus. Timely science advice can even serve as an early-warning system, heading off fundamental problems with a policy while it is still in the early stages of discussion.

The CSA role undoubtedly comes with a degree of power, and with it the potential for abuse. But the critics’ argument that a CSA’s voice will inevitably drown out all other sources of scientific evidence is patently untrue. Any CSA who is consistently at odds with mainstream scientific thinking will quickly find themselves vilified and isolated by the research community. Yet in Glover’s case, scientists gave their immediate and vocal support in response to those seeking to quash her post.

Juncker should now help Glover’s successor to build on her successes by devoting more resources to her office. In New Zealand, Glover gave a revealing presentation that showed how tough it has been to stake out her territory with virtually no budget and fewer than half a dozen staff. From her first one-to-one meeting with Barroso (on day 51 of her tenure), to the joy of finally getting a PA (day 547), it was hardly a tale of untrammelled power.

A well-supported CSA is essential if they are to offer a clear, authoritative voice to inform political debate. And with more resources, the next CSA could further promote the existing expertise of the JRC and the national academies of member states.

For while Glover’s ESAF network is a good start, there are surprisingly few formal mechanisms for sharing science advice with governments internationally. Science is a global enterprise, and volcanic ash clouds or flu epidemics know no borders. Greater collaboration between science advisers around the world is vital, and if a more formal system for that grows out of the New Zealand meeting, as looks likely, Europe’s CSA needs to play a key role in it.

Nominating a CSA is a clear sign that Europe takes science seriously. But strengthening the role would go further, demonstrating that Brussels is determined to put evidence at the heart of policymaking.