Has x-ray had its day?

Will the giant of structure determination be toppled by blasts from electron beams? 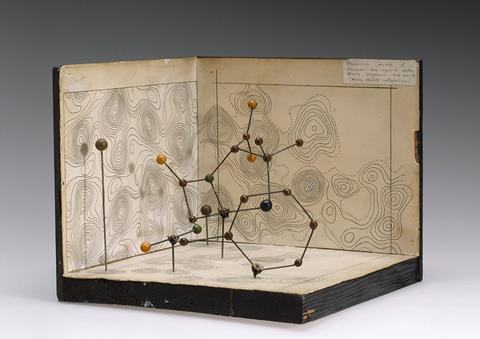 Dorothy Hodgkin’s structure of penicillin is one of a host of historical demonstrations of the unmatched power of x-ray diffraction, but other methods are set to topple its crown

Instrumental methods in chemistry have a life cycle, just like anything else. They are discovered and engineered to a point where they can be widely used, and then their possibilities are explored. Depending on their utility and their costs, they could have a reign of years as something that everyone in a particular field uses. But there are always other methods and other instruments, and something could come along that provides more information (or provides it more easily), and then what used to be a standard method starts to move off into a dustier corner.

Organic chemistry had a period, many decades ago, when infrared (IR) spectroscopy was one of the most powerful techniques available. But these days it’s often a matter of ‘We have an IR somewhere, right? I’m pretty sure we must’. NMR, meanwhile, is still a mighty workhorse, and the combination of liquid chromatography with mass spectrometry is powerful enough to relegate the once-ubiquitous thin-layer chromatography plates and dips to the back of the drawer – at least in the labs that can afford them. No one has to hunt around for where the LC–MS or NMR machines have ended up while no one was thinking about them.

It’s very possible that classical x-ray work will eventually come to seem rather quaint, something that people laboured over in the old days

X-ray crystallography is one method, though, that has been around for a very long time and provides structural data at a level that nothing else can match. No one runs every compound they make through it, because you need good quality crystals that are not always easy to get. But for settling structure questions, nothing else can match good x-ray data: it stops arguments in their tracks. Its extension to protein structures led right to the modern world of structural biology, even though good protein crystals are even harder to come by than small-molecule ones.

And yet it’s possible that the x-ray days are passing. The technique is under fire by electron beams coming in from two directions. From the protein end, cryo-electron microscopy images of individual protein particles can be assembled by extremely clever software into extraordinary structures of proteins and protein complexes that would likely never be crystallised. And from another direction comes electron diffraction, which is similar to x-ray diffraction but at far shorter wavelengths and with beams that interact with atomic nuclei far more strongly. That combination means electron diffraction works with crystals that are far smaller than any x-ray source could ever extract useful data from. These can be protein or small-molecule crystals, and they can be barely big enough to even see. Such crystals are far easier to come by than those required for traditional x-ray work.

Hardware and software for both these techniques are evolving rapidly. They have already moved and will continue to move into the territory of standard x-ray crystallography. It’s very possible that classical x-ray work will eventually come to seem rather quaint, something that people laboured over in the old days. Labour they did, too. In the pre-robotics days, collecting and analysing enough good diffraction data for a complex structure could occupy people for weeks or months, and earned several of them Nobel prizes. Even now, trying to grow protein crystals of sufficient size and quality is a brutal empirical slog of trial, error, educated guesswork, and sheer voodoo. Those who have had to do it will eventually grow nostalgic for it, but only because they may have moved on to not having to do so much of it any more – the same category as keeping a steam locomotive maintained or ploughing a field with a team of horses rather than a tractor.

I have received (as one might expect) a wide range of reactions from x-ray crystallographers to such thoughts. Some of them have agreed, while others vigorously defend the field in terms of what it still has to offer. But none of them have failed to recognise that the future – their future – will be very different. And all the ones I know who work on proteins have been learning cryo-EM. One way or another, the writing of the electron beam is on the wall.