As autumn descended on the forests of Denmark last year, so did thousands of Danish schoolchildren. Foraging in woods, parks and even school playgrounds, almost 25,000 children collected fallen leaves, fruits, vegetables and other natural samples as part of a the ‘Mass Experiment’. Organised by Astra – the Danish national Centre for Learning in Science, Technology and Health – in collaboration with the Biotech company Novozymes, the hunt was for new species of a particular kind of bacteria.

Lactobacillus, a member of the lactic acid bacteria family, is responsible for the traditional fermentation processes used to make many foods. If you’re a fan of cheese, kimchi or sourdough, you owe a debt of gratitude to this group of microorganisms. Lactic acid bacteria are naturally abundant on plants, and so the natural environment is a perfect hunting ground for new species.

Looking for a ‘good’ bacteria was an important focus of the project, explains Preben Nielsen, science manager at Novozymes. ‘We thought that we could use this experiment to teach children about bacteria and microorganisms and to teach them that bacteria can be good for us, not only pathogenic.’ It was important for the team that participants had a hands-on experience of science, and that they gained an appreciation of the ubiquitous presence of bacteria in our everyday lives. ‘Although you don’t see them, with the right experiments its relatively simple to demonstrate their presence in our environment,’ says Nielsen. 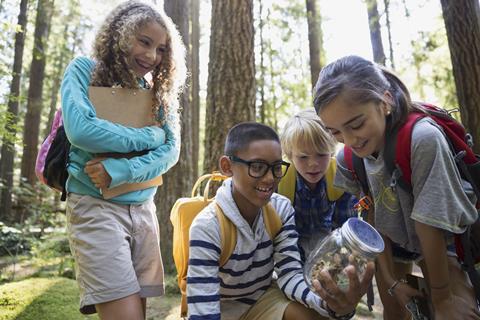 The spoils collected by the children were carefully transported back to the classroom to start the next part of the search. Once chopped into smaller pieces, the children added samples of their gathered material to separate pairs of test tubes – one containing pasteurised milk and the other a broth known to enrich the growth of lactic acid bacteria.

Next, the young citizen scientists waited patiently to see if the milk thickened to form yogurt when gently heated overnight, indicating the presence of the desired microbe. For positive samples, the partnering broth-filled test tube was sent off for further analysis by a team of 70 Novozyme scientists.

The project greatly underestimated the Danish schoolkids’ passion for science. Nielsen and his colleagues were staggered to receive over 11,000 broths that had tested positive in the experiments conducted by the young scientists. ‘We had to borrow an extra room because some days we got more than 100 shipments with the mail – it was almost like running a web shop.’ says Nielsen. ‘They were really engaged in going out and collecting samples and working with the samples.’

To date, 4000 separate strains of Lactobacillus have been identified from these samples, 10 of which hadn’t been previously discovered. Typically, one new species of Lactobacillus is described by Danish scientists each year – so the students have helped to set a new standard.

Nielsen says the crowdsourced nature of the experiment also has other advantages. ‘Normally when you describe a new bacterial species, you would like to be able to demonstrate that the bacteria can be found not only in one place but in several places, so you prefer three to five independent isolates. The good thing about Mass Experiment is that we have really a lot of samples and we have samples of the new strains from different schools that were collected independently.”

The data has been published in an interactive online map of Denmark showing the distribution of different lactic acid bacteria. Anyone can access the data to see where different strains of bacteria were discovered and details of the sample contained within the meta data. Importantly, credit is also given to the school responsible for each data set so students can track their own contributions. It’s also possible to view the evolutionary relationships between each strain as visualised in a phylogenetic tree that links each sample in the data set.

Scientific papers detailing the full characterisation and description of the new bacteria are forthcoming, but before publication the newly-discovered species each need a name. And as discoverers of new Lactobacillis, the children have been invited to suggest their own ideas for the new species. These citizen scientists will also be acknowledged in any research papers that uses these data. ‘This whole thing is about inspiring the youngsters to be interested in natural sciences and biology, where we used the discovery of healthy bacteria as a simple, yet very relevant case,’ said Nielsen.

But Nielsen believes scientific implications could reach far beyond the engagement of the next generation. ‘I’m pretty sure that some of the bacteria discovered in this experiment will contribute to product development, either at Novozymes or in public university research in the future. The aim is that these bacteria will be used in probiotic products that improve human health or in products to improve food quality.’