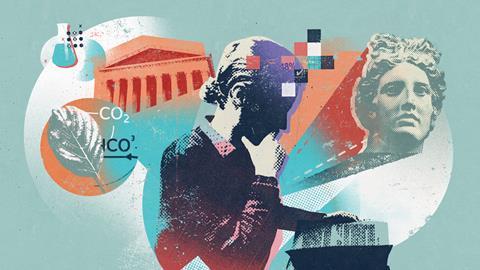 How do we know that we know?

Exploring the world of epistemology

The Nobel prize is perhaps the most prestigious award offered to scientists. More importantly, it is an opportunity for the public to learn about the questions that are currently puzzling scientists, and about the enormous progress that is made in different fields of science. This year for example, we learned about click chemistry and how it led to the development of a new class of reactions with important applications to both chemistry and biology.

The Nobel prize may give the impression that it is fairly straightforward to recognise genuine cases of scientific progress. However, this is misleading. The very idea of knowledge is extensively scrutinised in a distinct field of philosophy called epistemology. This aims to understand what constitutes knowledge; to specify how genuine knowledge differs from mere belief or opinion; and, to spell out what an adequate justification of a knowledge-claim requires.

The definition of knowledge is the first thing that undergraduate students are taught in philosophy courses. Knowledge – they are told – is justified true belief. This short definition, famously spelled out by Plato, encompasses three main claims.1 First, it states that knowledge represents one’s belief in some proposition, such as that Bristol has a famous bridge, or that the Acropolis is in Athens. Secondly, it implies that believing in a proposition is not sufficient for it to count as knowledge. It also has to be the case that the proposition is true (what renders a proposition true is another story!). For example, the proposition that elephants fly does not count as knowledge because, even if I believed it because I watched Dumbo, it is not true. Thirdly, it has to be the case that there is an adequate justification for believing in a proposition. For example, that the Romans once lived in Bath counts as a justified belief because historians and archeologists offer sufficient empirical evidence to support this proposition.

None of these three features are on their own sufficient for a proposition to count as knowledge: all three have to apply. It is not enough that I have a justified belief that the earth is round: it also has to be true. Moreover, I could believe in something that is true (say, that there are aliens in a distant universe), but have no justification for this. In this context, it would be mistaken to say that I know that aliens exist in a distant universe.

Nowadays most philosophers agree that even though these three conditions are necessary, they are not jointly sufficient. This is because we can come up with examples in which we believe in a proposition that is true and have justification for believing it, yet we wouldn’t intuitively say that we know it. This is standardly referred to as the Gettier problem, in honour of the philosopher Edmund Gettier who spelled out such cases in the 1960s.2 However, as far back as 770 CE Indian philosopher Dharmottara stated the problem like this:

Imagine that we are seeking water on a hot day. We suddenly see water, or so we think. In fact, we are not seeing water but a mirage, but when we reach the spot, we are lucky and find water right there under a rock. Can we say that we had genuine knowledge of water? The answer seems to be negative, for we were just lucky.3

Different proposals have been made to solve this problem, including adding a fourth requirement or amending one of the existing three. For example, the reliabilist theory of knowledge argues that knowledge-claims cannot be merely justified.4 Instead, they have to be produced by a reliable cognitive process. In the case of the mirage, the reliabilist would say that seeing water is not a reliable way of making inferences as sight can be very often misleading. Instead, one needs to follow a rigorous method of inquiry that may involve for instance repetitive checks by multiple people which are reviewed by others. In that way, we manage to avoid believing in true propositions through lucky guesses.

This issue raises a further question: what renders a justification adequate, or a process reliable? This is far from easy to answer, in part because the nature of justification is influenced by the kinds of propositions we are trying to justify. For example, the proposition that two plus two equals four requires a different justification to that needed for the proposition that acids react with bases to form salts. In the first case, it seems that we do not need to offer empirical evidence for this claim – we do not need to add things together many times to say that indeed the addition of two plus two always equals four. On the other hand, claims about reactions depend on experience and on background theoretical assumptions we make about chemical phenomena. Scientists need to scrutinise their assumptions and empirically test a hypothesis multiple times, through different experiments and methods, before concluding that the hypothesis can be reliably believed.

So creating new knowledge about the world is a very complicated task. Among other things, it involves constant scrutiny, close attention to the means we employ to justify our beliefs, and reliable methods of analysis. Adhering to such standards is what makes science the most successful source of knowledge and consequently one of the most distinguished achievements of humanity. Praise should be given to all scientists – not just those who win Nobel prizes!