IYPT is good news for chemistry

We are great admirers of Roger Highfield who is an excellent science journalist and also a chemist. But sometimes he gets things wrong and, in his article on the International Year of the Periodic Table (IYPT) in January’s issue of Chemistry World, Roger got things spectacularly wrong. He was wrong about the origins of the IYPT - it wasn’t a top-down diktat of the UN; he was wrong about the periodic table - chemists don’t need to learn from professional marketing; he was wrong about chemists preaching to the converted – interest is already exploding; and he was definitely wrong about the likely impact of IYPT when he described it as exciting as a tax return!

Many people are prepared to pay money to buy images of the periodic table. The same can’t be said for tax returns.

IYPT wasn’t born from bureaucracy; it was grassroots action. We played a role in making the IYPT happen. Dmitri Mendeleev’s first publication of his periodic table was in 1869 and, three years ago, Martyn suggested to the Royal Society of Chemistry (RSC) and International Union of Pure and Applied Chemistry (Iupac) that this 150th anniversary might be a good opportunity for a global celebration of chemistry. It caught David’s imagination, who was President of the European Chemical Society (EuChemS) at the time, and a bottom-up push was enough to ignite widespread enthusiasm. And the idea became a reality thanks to the efforts of Natalia Tarasova, then president of Iupac, and Jan Reedijk from Leiden University, Netherlands, among others. Approval from the UN and Unesco mobilised government support for national chemical societies around the world and, with this support, chemists of all levels, nationalities, and ages are seizing the opportunity to put on a bewildering range of events. IYPT has literally gone global. 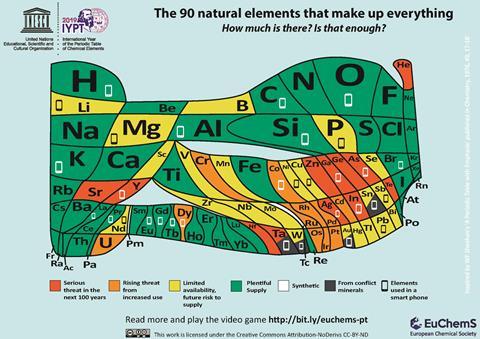 A revised periodic table highlighting scarcity of elements, released by EuChems as part of its IYPT programme

Of course, Mendeleev was not the only chemist to propose a scheme for classifying the elements. It was probably his quantitative prediction of the existence of new elements and his flair for self-publicity that ensured that his version won through. Like Mendeleev, Martyn can attest to the benefits of a wild hair style when promoting chemistry. With hindsight, we can see that Mendeleev’s real genius was in devising a system so flexible that it can be manipulated to illustrate countless properties of the elements. For example, in the run-up to IYPT, a group from EuChemS has designed a new version of the periodic table to highlight impending shortages of many of the elements that are critical to the technologies underpinning modern society. This has allowed chemists to convey an easily understood and important message and, following its launch in the European parliament by Catherine Stihler MEP, has attracted coverage in six out of seven continents.

Brilliant contributions from @univofstandrews at @EuChemS event on the periodic table. Thanks to David and Pilar. pic.twitter.com/o1wR6Fu9Xn

Far from needing to learn from marketers, the periodic table has caught the imagination of advertisers to sell everything from Audi cars to Japanese popular music. Individual element symbols are constantly being used to spell words and, judging by the number of themed items on sale, many people are prepared to pay money to buy images of the periodic table. The same can’t be said for tax returns.

Perhaps this is best illustrated by this email from a woman in Malaysia. ‘My three-year-old daughter is mysteriously very much in love with chemistry … She said that she will discover an element lighter than hydrogen by splitting it, will make sure it’s not flammable, that its half-life is not like francium’s, and she will name it Jette-ium, after herself.’ The IYPT is an opportunity for all of us to capitalise on such youthful enthusiasm.

The IYPT is now in full swing in the UK: the University of St Andrews is displaying the world’s oldest surviving classroom periodic table from 1885; St Catherine’s college at the University of Cambridge is taking its unique set of books connected with Mendeleev and the periodic table around the country; the University of Nottingham will have a periodic table-themed family open day in June; and the RSC is hoping to project a giant periodic table onto buildings across the UK. So now it’s time for Roger to join the action. For a start, he could make his suggestion of a lecture by 2018 Nobel Laureate Gregory Winter a reality. Good ideas shouldn’t go to waste!

This article was submitted in response to an article by Roger Highfield in which he questioned whether the International Year of the Periodic Table would capture the public’s imagination.