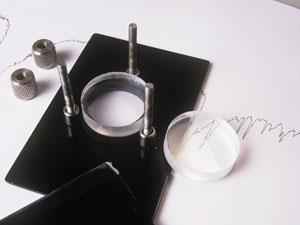 We chemists have gained many abilities in the lab as a result of modern instruments. But it’s hard to gain something without losing something else. At the risk of joining a long line of hand-wringers (the printing press did ruin the hand-copied book, you know), I think it’s worth looking over what we might have traded in for our newer machines.

The most obvious example is the decline of thin-layer chromatography (TLC). I never would have believed it, after so many years of taking so many TLC plates in the lab, but there’s no doubt that this method is being inexorably displaced by the availability of walk-up liquid chromatography-mass spectrometry (LC-MS) equipment. And it’s little wonder. A good LC-MS has better resolution than most TLC runs, gives you mass and fragmentation information for each peak, quantifies them according to several different ultraviolet wavelengths, and stores all this data for you as a file. Access to something like this during my own graduate school days would have seemed like the advent of magic powers.

But if your compound doesn’t ‘fly’ (that is, ionise well), mass spec will avail you not. In these cases, old-fashioned TLC, with its various media and countless stains, can still deliver the goods. But as time goes on, fewer and fewer bench chemists are likely to think of it. To be honest, this was already the (relative) case even twenty-five years ago. I remember looking through Egon Stahl’s huge TLC handbook at that time, with its two-dimensional developments and multi-step stains, and thinking that the golden age of the technique had clearly already passed.

We need to keep old techniques in mind, because we might need them now and then

You could go back 40 years and still say that about infrared (IR) spectroscopy. Chemists used to extract huge amounts of information from IR back in the pre-NMR days, but who bothers to do so now? Who bothers to take an IR at all, outside of grad students characterising compounds for their dissertations, or authors preparing a manuscript for some demanding journal? The machine gets dusted off for functional groups that are relatively NMR-silent, such as azides or internal alkynes, but I personally take an infrared spectrum about every four years or so. There are untold piles of IR data that I could have had on my compounds, but never will. The reaction-probe infrared monitors of more recent years have been the only real hope of making the technique relevant again, but they’re still rather pricey for most people.

Bypassed technologies are losses. Something went out of organic synthesis, for example, when it became easier to do structure determination spectroscopically as opposed to by degradation (or through total synthesis itself). But no one would propose going back to those wonderful intellectual challenges, just because they were so challenging, in the same way that we’d rather not walk ten miles to work in the morning. That’s the key thing to remember: we have other things to do with our time. Or we should.

The point of the printing press was not to drive fine copy from the world, and the point of the LC-MS is not to destroy the market for TLC plates. These things provide us with more knowledge, more quickly, and free us up to work on other problems. My colleagues and I could not produce so many drug candidate compounds if we had to spend days on each one making sure that it was, in fact, what we thought it to be. A quick mass spec and an NMR tell us that within minutes, and we move on to the next compound and the next problem. No matter how many new technologies we have, the big problems are still out there waiting for us – we just come to grips with them more directly now.

So I think we should avail ourselves of every useful tool we need, and if that means hardly running any TLC plates, well, so be it. Farewell to the developing chamber and farewell to the snap of the scored glass plate. But we need to keep the older techniques in mind, because we might well need them now and then. And we need to remember what these time-saving devices are really for, and spend our time on the hard problems they’ve left for us.