A poem about syphilis

In his Last retort article on chemical words (Chemistry World, June 2011, p72), David Jones comments that the chemical name of DDT is the only one he knows of which fits perfectly into a poem.

Paul Ehrlich’s anti-syphilis drug Salvarsan has also been set to poetry. The following limerick was in circulation within the department of chemistry at the University of Nottingham, UK, in the 1960s; the original author is unknown but could have been Professor Alan Johnson.

Your article about synthetic fuels (Liquid Assets, Chemistry World,  May 2011, p50) might leave your readers with the impression that Sasol, the South African Fuels and Chemicals Company were only interested in Fisher Tropsch chemistry during the period of white rule and have not made significant contributions since. This, however, would deride a company that has pioneered so much in Fischer Tropsch chemistry and is a major force in the new multiracial South Africa.

It is true that oil embargoes in the 1980s made it imperative for South Africa to produce its own liquid fuels and it did this using Fischer Tropsch chemistry using locally mined coal as a feedstock. Their two major plants in Sasolburg and Secunda produced about 1/3 of the liquid fuel used in South Africa at that time. However, since the political changes in South Africa, which have allowed oil imports, Sasol has not only diversified in chemical production but has introduced some of the first and largest plants making liquid fuels from natural gas (methane). The first of these was a retrofit to the plant in Sasolburg, using gas piped from Mozambique. This not only greatly improved the air quality in Sasolburg, but also reduced CO2 emissions significantly. The mixture of CO and hydrogen produced from coal is carbon rich so some of the CO is converted to CO2 and H2 by the water gas shift reaction. Synthesis gas from steam reforming of methane is hydrogen rich. By mixing the two, the stoichiometry required for the Fischer

Tropsch process can be obtained without the need for water gas shift chemistry, thus improving the carbon utilisation and reducing the CO2 emissions. Sasol then went on to build the first fully operational gas to liquids plant outside South Africa in Qatar, which, with a capacity of 35,000barrels per day, is the world’s largest gas to liquids plant. It has been running successfully since 2007. A further plant is being built in Nigeria and advanced discussions are taking place in many other locations, but Sasol have refused to build coal based plants where CO2 sequestration is not built into the process.

Sasol has taken a major part in the empowerment of previously disadvantaged groups by extensive outreach to schools, but especially through their bursary scheme. Sasol bursaries (>2300 operational at any one time costing >$7M) are given to individuals at all levels of university education and most of the bursars are guaranteed at least three years of employment within the company. Nowadays, the vast majority of these bursaries go to students from formerly underprivileged backgrounds so the work force in Sasol is diversifying rapidly. Once inside the company, these employees are mentored and trained so that they are empowered to rise quickly within the company. It will take time for formerly disadvantaged people to reach the very highest levels of the company, but there are several who are extremely able and are climbing rapidly.

Sasol is doing all it can to encourage and support the development of the new South Africa not only through its highly innovative scientific breakthroughs in Fischer Tropsch and chemicals production, but also through its commitment to diversity and the empowering of all South Africans.

Ed: There was no intention in this article to associate companies and their actions with political regimes, and we hope our readers did not perceive any. Nor was there any deliberate effort to downplay Sasol’s obvious contribution to this field. Representatives from Sasol were contacted extensively during the preparation of the article, but were unavailable to comment.

Being a graduate from Imperial College, I read with interest July’s Classic Kit (Chemistry World, July 2011, p60) describing the Evans balance. As I played a part in the development of the electronic version of the balance in use today, I believe that the writer of the column has omitted some of the balance’s history.

The balance described in Evans’ 1974 paper is not the Evans balance as we know it today. In the 1973 balance, deflection of the magnet assembly was detected by means of a light beam reflected from a mirror attached to the magnets onto a pair of light-dependent resistors. The magnets were returned to their original position by adjustment of a variable resistor to pass a current through a coil between the other pair of magnets, the current being proportional to the force.

In 1983, as a third year undergraduate working with Evans, my laboratory research project was the further development of this idea. The aim was to construct an electronic balance operating using a feedback system to produce null deflection in the magnet assembly, giving rise to a reading on a digital display from which the susceptibility could be easily calculated. The balance was successfully constructed, with only the values of the amplifier’s output stage resistors requiring refinement at the time I finished my studies. Shortly afterwards, I saw the completed balance in operation in Evans’ office during a visit to Imperial.

Although it was Johnson Matthey Equipment that produced the first commercial version of the balance in the mid 1980s, based on Evans’ and my prototype, I do not recall any direct involvement of Johnson Matthey during the construction of the prototype. The commercial unit I saw at a London trade show in about 1986 differed very little from the prototype, but was housed in a single case, whereas the prototype had been constructed in two cases to prevent any potential effects of the magnets on the electronics. Photographs of the magnet assembly in Sherwood Scientific’s MK 1 balance on Loughborough University’s staff website show it to be virtually identical to the one I constructed in 1983.

It was a privilege to have worked and studied with Evans. His intellect and colourful character are merely touched upon by the writer of the July column. It is good to see that in the Evans balance he is remembered, albeit in a small way.

A full reply to John Mann’s informative and entertaining article (Chemistry World, June 2011, p44) is contained, by coincidence, in a paper by Alan Dronsfield, Peter Ellis and myself, currently in press, which will appear in  Education in Chemistry. But to show that the evidence is against his argument that the recreational use of such agents prejudices the public against their potential medical benefits, I would like to extend the discussion to include diethyl ether. Its first, and successful, use as a general anaesthetic arose directly from familiarity with its recreational effects.

In early 1842 two general practitioners, William Clark of Rochester, New York, and Crawford Long of Jefferson, Georgia, were impelled by their own experience of the recreational inhalation of ether, each to administer it to one of their patients - Clark for a dental extraction, Long for the excision of a cyst on the neck. Long did not publish his case until several years after Morton, in 1846, had established ether as an effective general anaesthetic. Clark did not publish at all, which raises the question: if general anaesthesia was the boon that mankind, including in this instance surgeons, had been waiting, even striving, for, why this reticence? 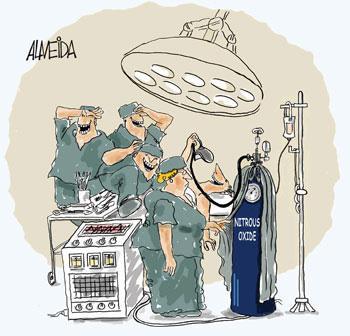 The unpalatable truth is that no one was looking for a means of relieving the pain of surgical operations per se. For the two men who did introduce it, it was a means to an end - Wells wanted to enhance his practice by removing the fear of dental extraction, Morton to patent it and corner the market.

Unfortunately, the early history of anaesthesia has become clouded by myths purposed to show humankind in a better light than it usually deserves.

One of the published pieces that stuck in my mind went as follows:

O Lord, I kneel upon my knees, and pray that all my syntheses may no longer be inferior
to those conducted by bacteria.

It would be interesting to consider what progress fifty years has made.

Referring to the recent item on methane activation (Chemistry World, July 2011, p23), it has to be said that, despite the interesting chemistry involved, the prospect for a practical direct route to ethylene (and the assumed co-production of dihydrogen) can rightfully be regarded as journalistic hype.

The desired reaction is not thermodynamically feasible under what would be regarded as reasonable conditions. Indeed, over the years, catalytic studies have had to resort to the use of oxidative routes, for example, to provide a driving force for the reaction, which otherwise would be sustained only at very high temperatures and/or extremely low pressures.

Alternatively, co-production of light hydrocarbons (including ethylene) and aromatics (plus polynuclear aromatics) in the absence of oxygen has also been demonstrated using molybdenum-based catalysts, for example. The kinetic inertness of methane is indeed a problem, as is pointed out in the article, but an additional (and I would argue a much bigger) problem is that methane is a thermodynamic sink for carbon and hydrogen and no amount of novel catalytic chemistry alone is going to solve this.

The activation of methane is not the real problem. It can be seen on a wide range of surfaces such as metals or even simple oxides that readily catalyse isotopic exchange reactions involving hydrogen and deuterium at conditions near ambient and at rates that are quite reasonable, as shown by the writer and various colleagues several years ago.

In the interests of persuading researchers to pursue the real challenges, one hopes that more work will continue dealing with ’thermodynamically allowed’ reactions with less work focused almost entirely on the claimed ’activation problem’. It will undoubtedly take a combination of clever chemistry and clever chemical engineering (e.g. rapid separation of hydrogen from ethylene) to provide the basis for a real practical approach to the envisaged conversion.

The popular press is frequently vilified in these pages for its unscientific, poorly researched and sensationalist coverage of scientific issues. Three cheers, then, for the layman’s coverage of hydrogen fuel cells in the July 2011 edition of Top Gear magazine (at least, in the Malaysia version I have in front of me). It’s simple, (mostly) accurate and dispels a few myths about the dangers of hydrogen as a road fuel. It’s also realistic about the pros and cons and the potential of hydrogen as a viable transport fuel.

Can someone please explain how the interests of chemistry are advanced by encouraging chemistry graduates to abandon a career in chemistry in order to pursue a career in accountancy (Chemistry World, August 2011, p64)? Other than the intellectual demands of both subjects there is nothing obvious that makes a chemistry degree a commendable precursor to an accountancy qualification.

These graduates have deprived others of a highly valued place only to cast it aside when qualified because they lack clear career aspirations. Further, why is the RSC paying a team of career advisers to advise chemistry graduates on careers outside of chemistry whilst at the same time promoting the benefits of chemistry to society? It is perverse.