At Imperial College we are building on our successes and have initiated a major interdisciplinary project that we have called 'Artificial Leaf initiative'.

I read with great interest the article by Hayley Birch entitled The artificial leaf  (Chemistry World, May 2009, p42). It was pleasing to see that the x-ray structure of Photosystem II (PSII) was shown as a key figure in the article. This structure was determined by myself and colleagues at Imperial College London1 and was the first fully refined atomic model of PSII. Despite this, no acknowledgement was given to its precise origin (I note the figure was taken from a Chem. Soc. Rev. which I have recently written2). Moreover, the legend referred to the structure being a ’fiendishly complicated protein complex, difficult to mimic’, a statement which is not true if the complex is dissected to focus on the water splitting site. From our x-ray diffraction analyses we concluded that this site is composed of three manganese ions and one calcium ion arranged as a cubane with bridging oxygens. A fourth manganese ion, we concluded, was attached to the cubane via one of its bridging oxygens and is adjacent to the calcium. The cubic-like arrangement is shown in the figure along with the side view of the complete structure as used in the Birch article. 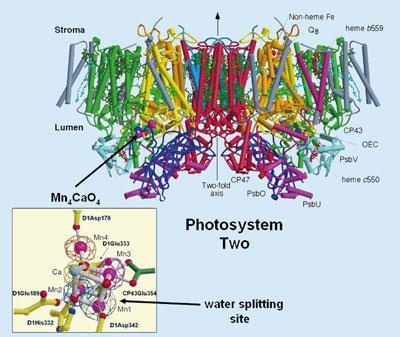 Side view of the crystal structure of PSII determined by James Barber and colleagues at Imperial College London, showing as an insert the organisation of the Mn4Ca metal cluster which catalyses the splitting of water

Despite the comment made in the figure legend, this cubic-like organisation of the metal ions has influenced efforts to mimic it. For example, Dismukes and colleagues in Princeton have employed a synthetic Mn4O4 cube as an effective water splitting catalyst3 and it has recently been discovered that the Nocera colbolt catalyst4 also has a cubic structure.

Birch also quotes David Britt of UC Davis, US, as saying that there is uncertainty about the validity of our structural model of the Mn4Ca cluster because of possible modification due to the x-ray radiation. However, the organisation of the metal cluster suggested by us has been rigorously examined using quantum mechanical methods by Brudvig, Batista and colleagues at Yale5 and they have concluded that this model is valid within the resolution of the diffraction data and the most satisfactory that we have today. Indeed, it has formed the basis for a detailed mechanism for water splitting by the same group.5

Readers of the Birch article can be forgiven for thinking that all efforts to mimic the leaf are entirely concentrated in the US and the PSII crystal structure has had no influence. The fact is that the UK has made a major contribution to this challenge. In fact, at Imperial College we are building on our successes and have initiated a major interdisciplinary project that we have called ’Artificial Leaf initiative’, a term coined prior to the publication of your article.
J Barber, CChem FRSC, FRS
Division of Molecular Biosciences
Imperial College London, UK

As a final year undergraduate student from the school of chemistry at Newcastle University, I carried out a survey assessing the public perception of the chemical sciences in the North East. The school has a large Outreach programme and engages in a number of activities with regional schools and colleges, the RSC, Newcastle Science City, the Ferguson Trust, and a number of proactive companies such as Procter and Gamble. For this reason, I tried to establish what current opinions the general public may hold about chemistry and those who practise the subject. Previous surveys of this nature have included that from RCUK assessing attitudes to science, a more chemistry specific survey done by the ACS in the year 2000 for which the data is now unavailable for viewing, and the ’Huddersfield experiment’ carried out by the RSC.

The survey was based around a self-administered questionnaire of 100 respondents and questions such as: ’what is chemistry?’, ’what is your perception of the chemical industry?’ and ’do you think there is a future in studying chemistry?’ were asked. Amongst a number of conclusions, some interesting features emerged. People found it difficult to define what exactly chemistry is, perhaps its broad application means it is problematic to ascribe to it one simple, unifying theme. Significantly, it was found that the majority of the population held neutral views towards the chemical industry; they were aware of the potential benefits to society but they did not have detailed knowledge about the industry.

It was also found that 78 per cent of the respondents thought there was a future in studying chemistry and, when asked to elaborate on potential career routes, industry, teaching and research were all mentioned.

Perhaps one area of key concern is the apparent lack of awareness the general public has for organisations such as the RSC (for more information see the survey). One possible solution to this is a more extensive advertising campaign using TV as the main source of media (80 per cent of those sampled named TV as their main source for information regarding science-related issues), an approach suggested by previous contributors to these pages.

I’ll end by leaving the last words to Linus Pauling who said ’Chemistry is wonderful. I feel sorry for people who don’t know anything about chemistry. They are missing an important source of happiness.’ My findings are to be published on the School of Chemistry website at Newcastle University (see website below).
B Tabatabaei
Newcastle, UK

I am appalled at the cavalier way in which the EU have banned dichloromethane. Has a proper risk assessment been carried out before this decision was made and if not, why not? As far as I am aware, there are, essentially, three ways that paint can be removed from a surface: 1) by sanding (very dusty and messy), 2) by blow torch or heat gun (very smelly) and 3) by paint stripper. With lead-based paint still present in older buildings, the first two methods pose real risks to both the operator and to the subsequent occupants of the building. Although the operator may be able to protect himself, this is impractical for subsequent occupants. Such a decision has put the health and safety of many people, including children, at risk and is unforgivable. [...] But is this fair?

My understanding is that the EU has also recently banned sodium chlorate weed killer and ammonium sulfamate weed killer/tree stump remover. There seems to be a concerted effort in the EU to ban ’chemicals’ of any type on the flimsiest of excuses. [...]
MDG Dabbs CChem MRSC
By email 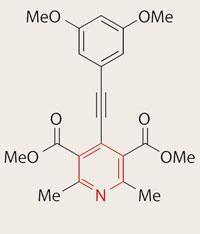 I noticed an error in the article Wibbly wobbly diagnostics for lung disease  - by the way, a great title - the pyridine ring was misdrawn (Chemistry World, May 2009, p8). What I’d like to know is if many chemists work better with images than with words, as I do, and if there are any more exotic ways to draw chemical structures (other than displayed, structural formulae and skeletal).
B May
Rendlesham, UK

The UK NMR Discussion Group was formed in 1964 and it later became a subject group of the RSC. By request, prof Les Sutcliffe and I have been compiling a history of this society and this has now been uploaded to the NMRDG web site with a link also from the RSC site. Some time ago Chemistry World published a note from us inviting contributions and reminiscences, and this proved very useful. Now I am writing to let the readership know that the website is up and running.

We have managed, with considerable help from a number of members, to provide an authoritative view of the group’s history within the context of the development of the subject itself, to provide short obituaries of those NMR spectroscopists who are no longer with us, to catalogue and display the programmes of all of the scientific meetings since the group’s foundation, and to compile a substantial gallery of pictures of people and equipment associated with NMR spectroscopy in the UK.

However, we regard the current version as very much a first edition and indeed know that there are omissions that we will correct later. Nevertheless, at this stage, we would welcome feedback from NMRDG members and your other readers with information on errors and omissions, and suggestions for, and contributions of, additional material. We would be particularly interested to receive pictures of historic spectrometers, laboratories or spectra for example.

I was delighted to see the photograph of Grangemouth Refinery by night and to read the comments on the Grangemouth Refinery below it (Chemistry World, May 2009, p57). I should like to add that Scotland was one of the first countries in the world to utilise shale products. Pumpherston in West Lothian was the scene of production of oil from shale over the period 1851 to 1962. When it closed down many   of its employees were found jobs at the Grangemouth refinery nearby.
J C Jones CChem FRSC FRSC
University of Aberdeen, UK

Please can I draw your attention to some errors in the May issue of Chemistry World? The item from the Daily Record  in In the papers  contains a lot of nonsense (Chemistry World, May 2009, p13). First, phosgene was not a first world war nerve gas. It is not a nerve gas at all, but kills by causing pulmonary oedema. Secondly, this chemical does not contain phosphorus although the best known nerve gases do contain phosphorus.

The main constituent of Phostoxin, the commercial rabbit poison, is aluminium phosphide, thus containing phosphorus, and its toxicity is attributed to the evolution of phosphine on contact with moisture. In no way could Phostoxin give rise to phosgene as stated. This seems to be a bad case of the journalistic misunderstanding of chemistry, but it is a pity that it was repeated in Chemistry World.
R Brettle CChem FRSC
By email

Repeated and prolonged immersion in water can cause an increase of lead excretion and is the most likely reason that the spa at Bath was such a success in days gone by. It really did cure lead poisoning brought on by the consumption of cider that had been in contact with lead. The subject, and the Bath Spa archive, was thoroughly researched by Audrey Heywood back in the 1980s (A Heywood et al, Brit. J. Ind. Med., 1986, 43, 713). There was even a TV programme about it; an account of the team’s activities, can be found at www.ralphmag.org/bath.html. The treatment even works for some cases of rheumatoid arthritis. Immersion up to the neck is the key, not the chemical composition of the water. As Norman Nicolson writes (Chemistry World, May 2009, p38), it is the weightlessness that does it.
G Mason,
Loughborough, UK