Clifford Jones proposes that the world’s trees, taken collectively, absorb large amounts of atmospheric CO2 (Chemistry World, October 2010, p34). How can this be true? Any climax ecology, whether forest, peatbog, savannah, or ocean will, if it is dimensionally constant, contain the same amount of ageing, dead and decaying organic matter as it will of new and growing matter. If it doesn’t, then it isn’t a climax ecology. Hence the net absorption of CO2 by wild trees, averaged over any reasonable area and time, must be zero.

There are two ways to absorb CO2 over the longer term. One is steadily to increase the forested areas of the world. This would be wonderful, and would have many further benefits, but is it at all possible? The other way is to fell mature trees or forests and to use the timber for long-life commercial products: buildings; furniture; or minor shipbuilding. Regrowth of the forest will then absorb more CO2. Although I realise that there would be other negative effects from the loss of tree cover, even subsequent short-cycle cropping of the land will be just as carbon neutral as a mature climax forest.

The concept of climax ecology has not met with full acceptance. Even if it had, Cannell’s invocation of it needs much closer argument if it is to carry conviction. My calculations are of a type which are being done all the time in ’carbon accounting’. I have distributed details of them to more than 10 readers who responded to my offer of a copy of the powerpoint presentation containing them.

Although informative, I wondered whether the face-to-face format of the comments on carbon capture and storage (Chemistry World, September 2010, p40) was helpful. 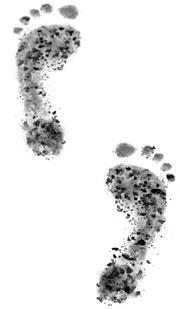 Do you know your household carbon footprint?

Such a polarised approach is also taken in the climate change debate - either you believe in climate change or you don’t. This results with each ’side’ wasting time and effort trying to convert the other to their viewpoint, followed by a never ending spiral of fruitless argument. A pro/con style of reporting helps perpetuate this non-scientific behaviour.

I do however believe that there is a risk that the climate might change, so I (and humankind) ought to manage it as a risk, ie. according to its probability and potential impact. One could argue conservatively that the probability of significant climate change is about 1-in-10 to 1-in-20, and the consequences would be unpleasant but not life threatening.

So what do I do today to mitigate an ’unpleasant but not life threatening risk with a probability of 1 in 20’, such as having my car stolen or having the house burn down? If I spend ?300 a year on my house insurance etc, then perhaps I ought to spend ?300 a year on climate change, either directly or indirectly via tax. My household carbon footprint is just under seven tonnes CO2 equivalent (Te) per year, so this simple calculation says an expenditure of ?40/Te on climate change mitigation is not out of line with other risks. This is a back-of-envelope assessment and others might not agree exactly with the numbers, but the approach might help move us all out of the ’it exists/it doesn’t exist’ rut.

May I correct Peter Borrows (Chemistry World, October 2010, p34). Iupac recommends in English the spelling of element 13 is aluminium.

Previous editions of this book did not even mention aluminum.

The Catholic Church, after criticising the Nobel prize in medicine awarded to Robert Edwards for the ’test tube baby’, is worried about the Nobel prize in chemistry to Heck, Negishi and Suzuki for cross-coupling chemistry. This chemistry is deemed to be immoral since it allows a wicked promiscuity between molecules.

The feature on gold (Chemistry World, September 2010, p48) mentions work carried out on the hydrogenation activity of small gold particles in the 1970s, but continues ’reports shortly afterwards suggested that the so-called activity of gold was probably the result of impurities.’ I believe this refers to work by myself and my colleagues P A Sermon, P B Wells and G Webb on the hydrogenation of ethene, pentene and butadiene.

While our publications had no immediate impact on the catalysis community, I do not recall anyone accusing us of using impure materials. We were of course aware that traces of noble metals might have been responsible, but we used Johnson Matthey Specpure chloroauric acid to make our catalysts, and the only other metals present were Fe, Cu and Ag totalling less than 1 ppm.

We concluded, as have others subsequently by greatly extending our work, that the observed activity was mainly due to gold particles so small as to be in a zero-valent but non-metallic state, since they gave an electron spin resonance signal that massive gold could not.

Ed:According to Graham Hutchings, the suggestion that impurities were responsible for catalysis by gold precedes Geoffrey Bond’s work. Some people thought traces of Pt or Pd were responsible.

The interesting account of Fred Boys’ work (Chemistry World, August 2010, p56) says that in 1949 in Cambridge he had two assistants ’whose sole job was..... using electronic calculators’. I was a PhD candidate in physical chemistry in 1948-49, and knew some of Lennard-Jones’s theoretical chemistry group. I think it highly unlikely that any form of electronic calculator existed at this time.

One member of L-J’s group used to borrow my own Marchant hand-driven mechanical calculator. The assistants were probably grinding away on similar mechanical machines, possibly fitted with electric motors to turn the handle. In M V Wilkes’s adjoining mathematical laboratory, where EDSAC was being built, mechanical calculators were used to illustrate the principles of computer programming, in lectures which I attended.

Reading the monthly obituary lists lends a lie to Andrea Sella’s mischievous friend (Chemistry World, September 2010, p68). This month’s list, excluding one at 58, gives an average of 84. I’m nearly but not quite there yet, so washing my hands in benzene or dipping them into chromic acid, also wetting the end of asbestos string with my tongue before wrapping it round a fractionating column hasn’t so far consigned me to the great laboratory in the sky.

The response to my request last month for a copy of the film The case of the sulphuric acid plant  (Chemistry World, October 2010, p35) has been rapid and immense and I would like to say a big thank you to all of the readers who wrote, telephoned and emailed me with offers of the film and other similar films produced by ICI.

I now have a digital copy of the film, courtesy of a Chemistry World  reader, and am currently investigating who holds the copyright. Once this matter has been settled I plan to add the film to the RSC YouTube channel.

In the course of my investigation I came across the BP video library and, while this doesn’t hold a copy of the film, it is free to join and has a fascinating and diverse collection of films which may also be of interest to fellow readers.

In Stephen Hawking’s new book, The grand design, Hawking states that ’The Big Bang was an inevitable consequence of the laws of physics ... and it was not necessary to invoke God to light the blue touch paper and set the Universe going’. This resulted in a number of responses from the country’s religious leaders. One writer in The Times asked ’if Darwin removed God from biology and now Hawking is attempting a similar approach in physics, is there room for a God in chemistry?’

I would suggest that there definitely is. What is the origin of the strong nuclear force that gives stability to our atoms? It is many times stronger than gravity that Hawking proposes.

What is the origin of the attractive forces that bond atoms together in our elements and compounds? Whence the genius that enabled Mendeleef to propose the periodic table of elements and the numerous chemistry discovers and inventors of former centuries that so enrich our understanding of the world around us?

Is there a place for design and a creator here?