It appears that 1985 was the beginning of microwave-assisted chemical reactions based on Smith’s as well as our published work. Our group started working on microwaves in solid state in about 1984, culminating in a journal article (R Royet al  , J. Amer. Ceram. Soc  ., 1985, 68, 392).

During the same year we published another paper on a microwave-assisted reaction in liquid state (S Komarneni and R Roy, Mater. Lett., 1985, 3, 165).

The abstract clearly states the role of microwaves in speeding up the reaction as follows: ’A new technique is devised for the preparation of solution derived titania gel spheres. The gel sphere preparation process involves the dispersal of the polymerised titanium ethoxide solution into a two-phase liquid suspension in kerosene followed by heating in a microwave oven. This is a simple and fast method for the preparation of xerogel spheres with diameter in the range of tens of micrometers which may be useful in coating technology by plasma-spraying.’

Subsequent to this paper, we published several tens of papers on microwave-assisted synthesis reactions of oxides and metals, starting in 1992.

In Flashback  (Chemistry World, September 2009, p84) you take us back to the design and manufacture, by electroforming, of the coronation crown of HRH The Prince of Wales.

The process used was as you describe it. But to form the sphere which tops the crown, moulded wax was not deemed suitable. 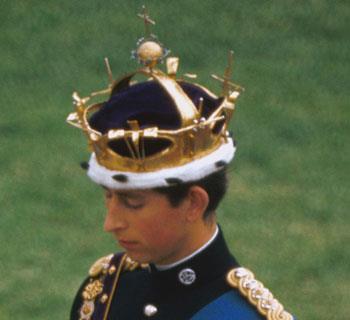 There’s a pingpong ball in there

In an inspired piece of lateral thinking, Lou Osman used a pingpong ball as a mandrel. This was silver-metallised using the chemical silvering process you describe and gold was electroformed onto it, thereby encasing the ball forever within its golden shell.

Somehow, one suspects that Prince Charles, with his well-known love of quirky Goon humour, would have seen the funny side of this.

Two articles in October 2009’s edition of Chemistry World  caught my eye. Both presented information without any reference to primary sources.

The first was Food supplement fights HIV  (Chemistry World, October 2009, p7), the title of which should have been ’Food supplement manufacturer claims supplement fights HIV but has no published proof and is looking for free advertising’. Your journalist took the words of Danone’s press release and massaged it into a news item without asking even the most basic questions which could have given weight to Danone’s claims, such as: ’Why haven’t you published this in a respected peer-reviewed journal?’.

The motto of the Royal Society is Nullius in verba  (take nobody’s word for it) and is the cornerstone of scientific progress. Unless the methods and results are available for public scrutiny, then the information provided is no more than unverifiable anecdote, which is how the second article The spice of life    came across (Chemistry World, October 2009, p42

Despite talking about ’a growing number of scientific studies’, the article did not reference a single paper or suggest further reading. This might be suitable for the Daily Mail  , but surely Chemistry World  is able to provide full references without feeling it is alienating its readers? Every other article in Chemistry World  was referenced, why not this one? It was a mish-mash of arguments from authority, arguments from antiquity (’Workers building the pyramids...were allotted garlic rations’), confusions between correlation and causation and wild extrapolation from animal lines to humans, not to mention unlikely errors such as referring to turmeric as a compound.

Itook the time to look at some of the studies suggested - the ’recent study of cancer patients undergoing chemotherapy which found that patients given small amounts of ginger reported 40 per cent less nausea’ turns out not to be in the published literature yet. It is well press-released across the US, but this was a summary released to coincide with the Oncology Society’s annual meeting [see Related Links] - no questioning, no analysis of methods, no scrutiny by peers, yet blindly presented as fact in Chemistry World  .  Given the likely Chemistry World  readership, unreferenced articles like these really shouldn’t be present.

Ed: The HIV story first appeared in a longer form online and included an independent comment and more facts about the clinical trial. It was a follow-up to a feature by the same author: Long life foods  (Chemistry World, May 2009, p50). Chemistry World is a news magazine, not a journal, and frequently reports on the latest research that is yet to be published.

I recently read David Jones’ Last retort  entitled Heavy life.  I would suggest that problems associated with heavy water and the generation of alternative life forms are more to do with kinetics than any difference in the mass or density of the two forms of water.

Once protons in a life form become substituted with deuterons, metabolic processes that rely on the breaking of hydrogen bonds could, through changes in zero point energy and the primary isotope effect, be up to five times slower. Hence heavy water life forms would either be very ’laid back’ or more likely dead because processes, such as the filtering of waste, become too slow to sustain life.

The cover photograph and the photograph accompanying Andy West’s article on Plastic alchemy (Chemistry World, September 2009, p52) give the wrong impression of plastics to be recycled. Recycling does not involve dealing with pristine items of the type shown. In reality, as described in the article, the 50 different types of plastic need to be separated from other types of waste, cleaned, separated into the different types and then transported for further processing.

Whilst recycling is laudable and in many cases involves interesting chemistry, it is not always practical, cost effective or environmentally beneficial. Once again the question should be asked: is it more beneficial overall to recycle the energy contained in the plastic and other waste and recover the energy as heat and power through disposal in energy from waste plants?

In his review of Quantum chemistry: a unified approach  (David B Cook), Dennis Rouvray asserts that the author, and the quantum chemical ideas that he presents, ’fail to yield a clear picture of what is going on when a bond forms’ (Chemistry World  , September 2009, p66). The first may be partially true in this elementary-level text where the author, in common with most others, fails to present the simple particle-in-the-box argument that quantum-mechanical kinetic energy is a primary driver for the formation of covalent bonds. It is, however, unreasonable to sweep away 80 years of spectacular predictive and interpretive success of Schr?dinger’s theory without presenting a shred of evidence of something better.

Rouvray lists a number of ’dubious assumptions’ in the standard quantum physics usually applied to explain chemistry, but all of these approximations are in fact well quantified and known to have errors that are very small, at least for normal molecules made up of elements near the beginning of the periodic table. Again, there is an absence of justification for these sweeping statements. The review then goes on to assert the need to invoke concepts such as the internal structure of electrons, including their dipole moment. Once again, these effects are quantifiable and tiny, and these statements form an unfortunate distraction to someone who might actually be interested in this book.

Undissuaded by this review, I look forward to enjoying using the book, in particular with students coming to the chemical bond for the first time from a less quantitative background, who often find that a totally non-mathematical introduction is a very useful stepping stone to the quantum mechanics needed to describe the covalent bond.

Dennis Rouvray replies: These comments are as surprising as they are gratuitous. Cook’s book was written specifically to stress ’the physical processes which occur on bond formation’, something it unfortunately failed to do. Moreover, to suggest that Schr?dinger’s mechanics is the last word in quantum chemistry is preposterous. Has the author of this letter never heard of the Dirac equation with its all-important inclusion of electron spin and relativistic effects? Even the humble hydrogen atom looks totally different from Dirac’s perspective!

Whilst the image accompanying Hamish Kidd’s review of What’s cooking in chemistry?  certainly fits the theme of the book, I have a question: why is there a model of aspirin in the image (Chemistry World, October 2009, p68)?

I can understand having table decorations, but I can’t help thinking it may have something to do with the after-effects of arguments about who’s going to clean the custard out of the bunsen.

I wonder whether any equally aged member of the RSC can throw some light on a question that has been puzzling me.

In 2007 I received a copy of The vitamin murders  (James Fergusson, Portobello Books). This book is an overview of the career of Sir Jack Drummond, the nutritionist, but naturally climaxes with the murder of Drummond, his wife and young daughter, outside the southern French village of Lurs in 1952.

According to the author, the Drummonds left Nottingham on 25 July, and caught a ferry from Dover to Dunkirk on 27 July. ’They drove slowly down the eastern side of France’, arriving at the house of biochemist Guy Marrian on 2 August.

Now, here’s the problem. The Second International Biochemistry Congress was held in Paris, 21-27 July. I was present throughout that week, and Drummond is listed as a member as indeed is Guy Marrian. On, I think, Sunday 27 July, there was a guided tour of the Institut Pasteur, and afterwards a photograph was taken on the steps of the institute. I have a clear recollection of Drummond, together with his wife and the little girl, being in the group. You can imagine, therefore, the horror with which I learnt, a week later, that all three had been shot to death.

The only plausible explanation is that Lady Drummond drove with her daughter from Nottingham, caught the night ferry from Dover on 26-27 July, and joined her husband in Paris - and visited the Institut Pasteur with him - before all three set off for the south of France. I wonder whether any former colleague of Drummond, or the Boots archives, could confirm this theory.