I was delighted to see the glass industry under examination in The last retort   (Chemistry World, November 2010, p78). However, I was surprised at David Jones’ lack of understanding of materials’ properties and the current state-of-the-art in the glass industry. Glass is actually a relatively good thermal insulator; an O’ level science experiment I remember had one student holding a metal rod, another student a glass rod, each rod placed in a Bunsen flame. The student holding the metal rod obviously had to drop his rod first. Glass has a thermal conductivity of about 1Wm-1K-1, which compares quite well with dense brick (1.3Wm-1K-1) and mortar (1.7 Wm-1K-1). It is actually the aluminium frames that are thermally conductive (250Wm-1K-1). Granted glass is not as thermally insulating as air (0.024Wm-1K-1 - hence an air gap in double glazing) or glass wool insulation (0.04Wm-1K-1) but, for its thickness, glass doesn’t do too badly. (Data from www.engineeringtoolbox.com/thermal-conductivity-d_429.html). David Jones’ argument that it is seldom feasible to upgrade current housing stock with double or triple glazing, surely he would need to do the same with his thermally insulating glass?

The real problem is that glass is thermally transparent, so most of the heat transfer is radiative. In the near infrared (NIR), glass has a transmission of about 80 per cent, which is good for letting in lots of heat energy from the sun. At room temperature blackbody wavelengths (5-50mm) glass is opaque, but the energy absorbed is easily re-radiated due to the relatively high emissivity of glass (e = 0.84, perfect blackbody e = 1). And this is the cause of heat loss through the glass of a window. The glass industry has overcome this by depositing transparent conducting coatings with low emissivity onto the surface of the glass, eg Pilkington K-glass, which has a coating of fluorine-doped tin oxide (e = 0.17) or Pilkington Optitherm S3, which has a coating stack containing a few nm of silver (e = 0.04). These coatings essentially trap the heat energy inside the building by reflecting the long wavelength radiation back into the room. I don’t think Jones’ suggestion of ’glass with holes in it’ would perform such a function. The material he is proposing sounds a lot like an aerogel, which is very thermally insulating but probably wouldn’t make a big difference to the energy efficiency of the window. As glass is initially ’melted’ (it’s actually a chemical reaction) at around 1600?C and poured onto the molten tin in the float process at around 1100?C I would suggest that Jones’ spherical polymeric SiO2 particles would also melt and just become part of the glass matrix. His suggestion of a porous silica material with low refractive index, if used on the surface of the glass, will perform as an anti-reflection coating by acting as an intermediate refractive index material at the air-glass interface. It could even be tuned to anti-reflect at the water-glass interface if one wished to fish with glass weights.

Optical properties of glass, such as refractive index and dispersion, are better understood than implied by David Jones in his intriguing article (Chemistry World, November 2010, p78).

Briefly, these properties of an ordinary soda-lime-silica glass (e.g. of Na2O-CaO-SiO2 molar composition 15:15:70) result from the reduction in velocity of the photons as they pass through the glass. It is the oxygen atoms that have the greatest effect in retarding the photons owing to the very ’floppy’ nature of their electronic charge clouds. This "floppiness" is measured as the electronic polarisability and is related to refractive index by the well known Lorentz-Lorenz expression. Oxygen atoms in glass have a much greater polarisability compared with the silicon, etc. atoms because they are derived from the highly polarisable dinegative oxide ion. Furthermore, the oxygen polarisability is exceptionally variable depending on the extent to which it is polarised by the other atoms in the glass.

From a chemical point of view, oxygen (in the -2 state), through its floppy charge clouds, can act as a Lewis base and readily coordinates with metal ions such as Fe3+ or Pb2+ when these are dissolved in glass. Ultraviolet spectroscopy of these ions, by application of J?rgensen’s nephelauxetic parameterisation,1 has provided a means for quantifying the oxygen Lewis basicity in terms of the ’optical basicity’ value.2 For most oxide glasses the optical basicity is around 0.5-0.7 (compared with the defined value of unity for CaO). Since optical basicity and polarisability arise from the same cause - floppy charge clouds - they are expected to be related. Examination of refractivity data for more than 400 glasses has shown that the relationship is a simple one.3 The optical basicity value of a glass is readily calculated from chemical composition, thus making the link with refractive index understandable in simple chemical terms.

Glass and silicates generally, in the molten state, are involved in redox equilibria which have great technological importance, e.g. in glass making and in the operation of slags in metal refining. For given conditions, these equilibria are frequently dependent on optical basicity.4 Thus, again the application of optical basicity shows how the position of chemical equilibrium for Fe2+/Fe3+ in glass or sulfide/sulfur in molten iron is understandably linked to refractive index.

TV news footage of Bunsen burners in schools often show them left with a sooty flame under a gauze on a tripod. This is liable to result in sooty particles entering the atmosphere of the laboratory.

When I worked in a suite of laboratories, I could tell when someone had left a Bunsen flame like this from two doors down, by the odour. I’ve been able to measure CO levels with a Draeger tube from badly set up Bunsens, so I think the RSC should advise that Bunsen flames should be left luminous (if at all), but well away from all surfaces, including the tripod and gauze.

When used to heat the contents of glassware, the flame must be blue, top and bottom.

I found the comment made by Nick Gudde (Chemistry World, November 2010, p38) that he is uncertain that the climate will change in the next 50 years rather puzzling. Where has he been over the last 50 years, or is he very young? Since the mid-1930s, I have experienced global warming, global cooling, floods and very dry spells. As night follows day, weather patterns are always changing and the next 50 years will be no different. Indeed, this natural process has occurred down through the ages.

Any external input into this process by CO2 emissions can only be considered to be marginal. Otherwise, how can the frequent changes in warming and cooling, which have occurred throughout the ages, be explained?

Recent examples of this are the warming spells in the 1890s, 1920s, 1930s and the early 1940s, and the potential life changing cooling during 1945 to mid-1970s. During those warming spells, the Arctic ice cap suffered severe melting. It was so bad in 1922 that a Norwegian report expressed concern about the future of the Eskimos.

The only consistent thing about the climate is that it is always changing.

When an ionic lattice melts, the ions separate and move around, associating with oppositely charged ions, but constantly swapping partners.

So, what happens when a giant covalent lattice such as silica melts? What type of particles are present in the molten silica?

Having consulted various texts, internet sources and the RSC Library and Information Centre my query, as yet, remains unanswered.

Clearly, some Si-O bonds must be broken to melt the lattice. However, new bonds must form, presumably Si-O bonds rather than Si-Si and O=O, since the silica does not thermally decompose into its elements.

This implies that some existing Si-O bonds become Si=O bonds around the surface of smaller clusters of (SiO2)n.

Presumably, the higher the temperature, the more the lattice breaks down, and the smaller the average size of the clusters or lattice fragments. Maybe the melt also contains some discrete SiO2 molecules.

Have I deduced correctly? If not, what is the correct answer?

Like Peter Baker (Chemistry World, December 2010, p32) I was privileged to have been introduced to chemistry in the 1950s by an elderly Victorian gentleman steeped in the traditions of the subject prior to its contamination by Iupac nomenclature and all such other nonsense. 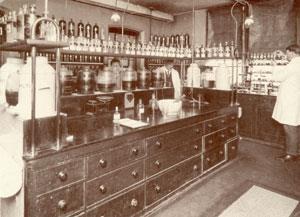 One of the first lessons was a list of traditional chemical names and their (then) modern translations, which has stood me in good stead ever since. I reiterate it for the edification of the more modern reader.

We are writing to you concerning a very recent event that is profoundly troubling for all scientific interactions, and significantly damages the good names of many eminent scientists. Specifically, the Nobel Symposium Committee had formally approved five months ago, in June 2010, Nobel Symposium Number 151 on ’Water in Biology and Medicine’. At that time, 22 international speakers were formally invited, their abstracts submitted, and a preliminary conference programme produced. On 5 November 2010, speakers were shocked to receive an email message from Mr Michael Sohlman, chairman of the Nobel Symposium Committee and executive director of the Nobel Foundation, announcing the cancellation of the meeting, without giving any reason for this unprecedented action.

The idea to hold an international symposium on water in biology and medicine occurred early in 2009 at the Karolinska Institutet, Sweden’s internationally renowned medical university, and evolved into the concept of a multidisciplinary meeting looking at water both broadly and profoundly, from fundamental physical theory, through chemistry and molecular biology to the mesoscopic and macroscopic levels of relevance to cells, tissues and organs. It included examination of the human vasculature, and the role of hydrodynamics and turbulence.

The proposal to the Nobel Symposium Committee was submitted in March 2010 and was formally approved by the Nobel Symposium Committee, three Nobel prize committees (Physics, Chemistry and Physiology & Medicine), and by the board of the Nobel Foundation [written documentation is available]. Five months ago, in June 2010 formal written invitations were sent to the proposed speakers listed in the application. The speakers were asked to furnish titles and abstracts for their papers, and informed that an additional requirement would be to prepare manuscripts for subsequent early publication. The organising committee had an agreement with the Royal Society of London to publish these papers in the Society’s new journal Interface focus and we understand that some authors had begun to prepare their contributions. The international water community also discussed the upcoming Nobel Symposium No. 151 at the bi-annual Water Gordon Conference in August. Overall, the decision by the Nobel Symposium Committee strikes us as most singular and extremely disruptive.

At no time prior to the un-invitation letter did the Nobel Symposium Committee, or any of the scientific members of this committee, discuss their contemplated action with any member of the conference’s organising committee or with any of the invited speakers. However, we have good reason to believe that the cancellation was caused at least in part by concerns in certain quarters about the quality of some of the speakers, albeit flatly contradicted by the wording of the formal un-invitation letter sent by Mr Sohlman.

Because of the high esteem in which these august bodies, all associated with the name of Alfred Nobel, are held in scientific and wider circles, these developments set a dangerous precedent and raise questions in the minds of all concerning the decision-making mechanisms of the Nobel Foundation and the Nobel Symposium Committee. It is unheard of in our experience, and is causing alarm, puzzlement and anger within the community concerned. From what we know of the behind the scenes motivations for the Nobel Symposium Committee’s decision, some very strange and questionable procedures have been adopted here.