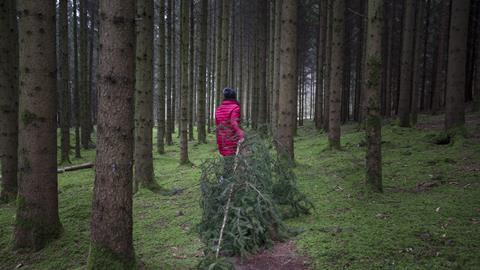 It’s not the ghost of Christmas past that will haunt tree thieves and timber traffickers, but those who wield the power of mass spectrometry

Last December, a spruce festooned by members of the Women’s Institute in the English village of Graveney was stolen in broad daylight – lights and all. About a week before Christmas 2020, a five-member team was captured on video spiriting away a merry tree from the lobby of a University of British Columbia building. Christmas season 2020 also saw ‘three unwise men’ helping themselves to trees at a pop-up shop in southwest London, while 2019 saw a duo do the same in Houston, Texas. These real-life grinches are just the tip of the timber-thieving iceberg.

Reportedly, one in five Christmas trees in Sweden is stolen from the country’s central and western forest counties. The biggest threat to the Guatemalan fir, dubbed the Chanel N⁰ 5 of Christmas trees for its desirable seasonal scent, are ‘Christmas tree mafias’ that poach millions of these firs and their branches each year. The far less hunted fir species within the Willamette National Forest in Oregon, US, took a hit in the 2019 Christmas season when a pair of unlawful tree trimmers cut nearly two tons of boughs. A hot commodity come Christmas time are the tops of immature spruce trees from northeastern Minnesota’s boreal forest, which are potted up to look like mini Christmas trees, ending up ‘as tabletop centrepieces or on suburban front porches’.

Spruce shenanigans, pine pilfering and fiendishly felling fir are driven by Christmas sales, and are just part of the far larger problems of illegal logging and timber trafficking. The illegal timber trade causes ‘untold environmental, social and economic damage’, and has grown to become the third largest transnational crime. At the international level, the Convention on International Trade in Endangered Species of Wild Fauna and Flora (CITES) includes regulations and safeguards for several hundred tree species, many being sourced for timber. Local and national laws aimed at all manner of natural resource trafficking typically specify allowances and prohibitions at the species level, such as the US Lacey Act. Species identification is critical to track and truncate timber trafficking.

For forensic wood species identification requiring little to no sample preparation, direct analysis in real-time time-of-flight mass spectrometry (DART-TOF-MS) has emerged as the top technique. DART mass spectrometry (MS) is considered non-contact and relatively non-destructive, reducing sample cross-contamination and sample loss. Seemingly ideally suited for forensic work, DART-MS techniques have found wide applicability in the discipline for analysing a range of regulated and controlled substances. Providing a chemical profile for analysed samples, DART-TOF-MS profiles have been demonstrated to discriminate between wood from closely related tree species that other methods were unable to distinguish.

One example involves species of Afzelia distributed in Africa.1 These trees’ wood is broadly valued for its dimensional stability, durability, low shrinkage upon drying and appearance, though the market value of Afzelia timber varies depending on exact origin and species. Two particular species – A. bipindensis and A. pachyloba – overlap in natural distribution with the first being twice the price of the second. Confident species identification is critical for international trade, but classical comparison of microscopic wood features was not up to the task. Sorting A. bipindensis from A. pachyloba proved a snap for DART-TOF-MS with subsequent statistical analysis as their chemical profiles were sufficiently distinct.

Heightening the differentiation challenge is within-species pinpointing of wood’s geographic provenance – research that returns to Christmas trees towering along western Oregon. Researchers sourced wood cores from coast Douglas fir (Pseudotsuga menziesii (Mirb.) Franco var. menziesii) from Oregon’s Coast Range and Cascade Range, with these trees being close kin and neighbours as they hailed from a narrow region of less than 100km.2 For all their similarities, variability in genetics or environmental conditions could result in wood chemical variations sufficient to place a coast Douglas fir core in either the Coast or Cascade Range. Researchers were able to classify collected mass spectra to either mountain range with an accuracy between 70% and 76%, noting that classification accuracy was higher for Coast Range trees than Cascade Range trees. This exacting and encouraging work was done in part by researchers at the US Fish and Wildlife Service’s National Fish and Wildlife Forensic Laboratory (NFWFL), who have been at the forefront of developing DART-TOFMS for timber species identification.

Using their DART-TOF-MS workflow, NFWFL scientists systematically analysed protected and regulated timber to create the Forensic Spectra of Trees (Forest) database for use in timber crime investigations. Their recent validation study showing that wood identification using a DART-TOF-MS plus Forest workflow is ‘repeatable, reproducible, and accurate’ was recently published in Forensic Science International: Animals and Environments.3 Just what is needed to fight Christmas tree bah humbug bandits, and timber traffickers, all year long.