Once upon a time there were chemists who made the distinction between the ‘sporting techniques’ of spectroscopy and the ‘not quite cricket’ methods of x-ray crystallography. The pure power of intellect was required to infer (a word used with heavy emphasis) a structural formula. Crystallography, by contrast, simply produced a picture; it was too ‘easy’ to be proper science. Today, many crystals go straight into the beam – revealing their structure within an hour. 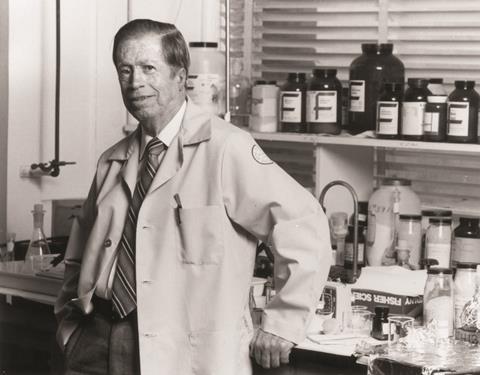 The point is that change is always hard to accept. After all, if something worked so well for us when we were young, why should we do anything different? The answer, of course, is that change can bring open new vistas and possibilities. One of the most disruptive and fertile new ideas was organic synthesis on solid supports, developed by Bruce Merrifield in the early 1960s.

Merrifield grew up in California, US, during the Great Depression. Despite moving schools repeatedly he went on to study chemistry at the University of California, Los Angeles (UCLA), before taking a job as a research technician in a lab that was examining the importance of dietary amino acids. Although his role was simply to look after the animals, the work hooked Merrifield into research. After a year, he returned to UCLA to study protein analysis. When he got his PhD in 1949 he married a fellow student, Libby Furlong, and together they moved to Rockefeller Institute in New York to work on peptides with the blind biochemist Wayne Woolley.

At the time, peptides and proteins were the real enigma of biochemistry, thought to hold the secrets of the nature of life itself. Early in the 20th century Emil Fischer had coined the word peptide, identified the amide link between amino acids and prepared glycyl glycine, the first synthetic peptide. Now the majority of biochemistry research aimed to isolate peptides and try to understand their function and composition.

The synthetic challenge of more complex peptides was the need to protect both the chain and the incoming amino acid such that only the desired amide/peptide bond would be formed, and in high yield. In 1932, two of Fischer’s students, Max Bergmann and Leonidas Zervas, introduced a new protecting group for the amino group of amino acids , the benzoyloxycarbonyl (termed Z), that could be selectively removed by using sodium in liquid ammonia. From that moment, total syntheses of ever longer peptides began to be reported, culminating in 1953 when Vincent du Vigneaud, working at Cornell Medical School, reported the synthesis of the nonapeptide oxytocin. The product not only had the correct spectroscopic signature, but microgram quantities induced labour and lactation in women. It was the first synthetic hormone.

This synthesis had taken about four years of effort. The addition of each amino acid in the chain required a cycle of protection, attachment and deprotection, both along the chain and on the side-groups. Purification of the intermediate products took time, even with the new counter-current extraction methods introduced around 1950 by Lyman Craig, also at Rockefeller.

Merrifield, who had just adopted Fred Sanger’s new peptide sequencing method, and was synthesising them from scratch, decided that spending 11 months preparing a pentapeptide in just 7% yield was just unbearable. On 26 May 1959 he wrote in his notebook ’a new approach to the continuous, stepwise synthesis of proteins’. The idea was simple: to anchor the C-terminus of an amino acid to an insoluble polymeric support. A second, protected, amino acid could then be coupled onto the first. After washing and deprotection in situ, the next amino acid could be clipped on. Hence the chain would grow, tethered to the support, removing the need for purification at each stage. Woolley gave him the OK to give it a try.

If the idea was simple, getting it to work was not. Merrifield spent the next three years at the bench trying every polymer he could – including cellulose, polyvinyl alcohol and polyacrylamide. Eventually, he tried the cross-linked polystyrene beads that Gaetano D’Alelio had developed for ion exchange. He functionalised the resin by chloromethylation, followed by nitration to suppress premature acid cleavage of the chain. He could now attach his first amino acid. But coupling Z-protected amino acids conventionally proved slow and unreliable. So Merrifield switched to the newly discovered dicyclohexylcarbodiimide method (he had to make the DCC himself) and t-butoxycarbonyl moiety for protection of the N-terminal of amino acids. This step, conducted in a cold room, was notorious for giving chemists low blood pressure.

But Merrifield’s tenacity at the bench – and Woolley’s patience – paid off. In 1963, Merrifield wrote up the preparation of a tetrapeptide, entitled Solid phase peptide synthesis 1,[1] confident that there was a stream of other papers in the pipeline. Thoughtful and self-critical, he noted that for the method to be really useful ‘it must be automated’.

Reaction from other chemists was mixed. In 1964, the organic chemist Robert Robinson visited Rockerfeller; on his way out he said to graduate student Garland Marshall that he would nominate Merrifield for the Nobel prize. But to others it was anathema: ‘proper’ chemists characterised their intermediates; using a vast excess of a reagent was wasteful; and the products weren’t always perfectly pure. As late as 1971, a critic was still pointing out the ‘generic inborn defects’ in the technique, even after Merrifield and his colleagues had invented and developed automatic peptide synthesisers, programmed with pegs on a rotating drum, and used them, through 369 reactions and 11,931 programmed steps, to prepare the 124-amino acid bovine ribonuclease. Others would be inspired to develop methods for nucleic acids and carbohydrates.

Making bespoke biopolymers is now fast and almost routine; it has opened up new dimensions in life science. So when someone shows us something new, don’t ask if it breaks the rules you were taught as a student. Shake off your natural conservatism and ask: ‘What could I do with that?’

I am very grateful to Svetland Mojsov, and to Garland Marshall for his thoughts and reminiscences