In the 19th century, several American gold rushes were triggered by the hope that certain streams might contain gold dust – these tiny particles end up suspended in the water when the river has abraded gold-containing rocks further upstream. You could get some of this by panning the water for those dense gold particles. A lucky gold seeker would then head to the local bank to cash his find. The story goes that one ingenious cashier had heavily greased hair, which he frequently smoothed as he handled the dust. When he washed his hair at the end of the day, he usually found an appreciable amount of gold dust in the washings. 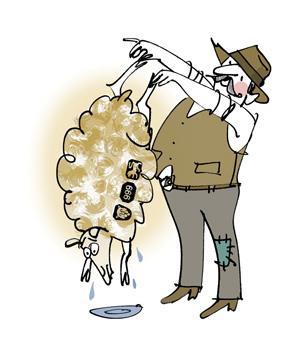 A subtler trick of the same type uses a much thinner coating of oil. The golden fleece of legend may refer to the trick of dipping the fleece of a sheep into a stream. The natural oils on the fleece attract any particles of gold; other particles simply pass on. Even a few monolayers of oil can coat themselves on a metal and make it water repellent. You can see the principle by the delicate party trick of floating a needle on water. The needle probably picks up enough oil from your fingers to be lifted by the surface tension of the water. A quartz needle picks up no oil and always sinks.

This phenomenon has a powerful industrial application: the froth flotation separation trick used in mineral processing. Chemically, it is very non-obvious and there are lots of stories about how it got started. In one of them, a woman washing the greasy clothes of a mineral assayer noticed that the suds became discoloured by the minerals. Froth flotation is increasingly important, especially as the richer mineral deposits are being steadily used up. These days miners often have to exploit very poor sources – the rock may contain less than 1% of the stuff they want.

Such ores have to be crushed to get at the useful particles, and are generally crushed wet. The resulting slurry is mostly worthless, but clever chemistry allows the miners to get hold of the few particles they want. They add a collector to the slurry, which coats the desired particles and makes them water repellent. They also add a frother. When they blow compressed air into the suspension, the resulting bubbles tend to be coated with the right particles. The froth rises to the top; the miners skim it off, let it settle, and filter it for smelting.

An active mine is always digging up new mineral, so the chemistry is always changing. Even so, a few common rules of thumb have emerged. Long-chain fatty acids and petroleum sulfonates are part of the froth-floater’s armoury and the pH of the suspension can also be important. Many sulfides (such as lead sulfide, the mineral galena) are strongly collected by xanthates; diphenyl thiourea is also a useful collector. However, zinc sulfide (the mineral sphalerite) will not float with xanthate collectors unless a soluble copper salt is present. When the mine encounters several different useful minerals, it may be possible to separate them by a set of differential flotation processes, which activate one mineral while depressing another. Alkaline sodium cyanide stops iron pyrites floating with xanthate, for example. Froth is often a nuisance to the laboratory chemist; but it can be very welcome in mining!