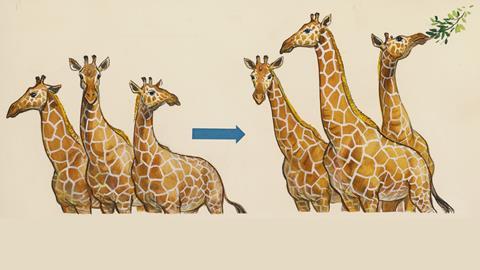 Does adaptation lead to a molecular Darwinism?

Le Chatelier’s principle is neither hard to state nor to understand. But it’s kind of hard to find the right words. It’s typically expressed as something like: ‘If a dynamic equilibrium is disturbed by changing the conditions, the position of equilibrium moves to counteract the change.’ But there is a clear implication of intentionality here: it’s as though the system is determined to keep its balance.

Sometimes, Le Chatelier’s principle is more or less equated with homeostasis in physiology – the maintenance of a steady state in a changing environment. Some homeostasis, such as pH regulation, does indeed involve the kind of shift in chemical equilibria described by Le Chatelier’s principle. The confusing thing is that biological homeostasis is also a survival mechanism and therefore connected to Darwinian adaptation. We have evolved sweat glands, yet the regulation of body temperature by sweating can be explained by purely physical laws.

What this really means is that ‘adaptation to the environment’ has more than one meaning. It can refer to the gradual accommodation to a niche explained by natural selection in self-replicating systems, or to the instantaneous response to fluctuating environmental conditions due to physicochemical principles. These two processes interact, but one might have thought we could keep them distinct. After seeing a paper by Jordan Horowitz and Jeremy England of the Massachusetts Institute of Technology, US, I’m not so sure.

The duo describe how a network of interacting chemical reactions can attain far-from-equilibrium steady states when driven (‘forced’) by its environment. At first glance this might sound unremarkable and well-known. But Horowitz and England show that a chemical system like this can find states specifically attuned to the surroundings because of how they are forced.

This is best explained by comparing it with one of Darwin’s most famous scenarios from On the origin of species: there are lots of juicy leaves high up in the trees, but only creatures of exceptional height can reach them. Well then, you expect the population to gradually evolve into a tall species: with the giraffe’s long neck, say. That’s classic Darwinian evolution, dependent on inheritance of advantageous traits.

Now, here’s the same scenario only with chemicals. Suppose a bunch of chemical reactions could potentially harvest energy from the environment, dissipating it in the process – but that it can do so only for a highly specific and atypical arrangement of the components. Maybe there’s an energy-rich molecule in the surroundings, but you have to have just the right substrate to be able to use it. The chemical networks of Horowitz and England find their way to those adapted configurations – but unlike the giraffe example, there are no cycles of replication and selection to bring it about. They just find their way to the adapted state dynamically: the forcing strongly biases the exploration of configuration space.

How does it happen? The two researchers simulate a randomly ‘wired’ network of chemical reactions involving first-, second- and third-order processes (A B, A + B C + D and so on), with randomly chosen rate constants. Forcing can then be modeled by setting the rate of, say, A → B to be faster than that of B → A, implying that there’s some ‘fuel’ that breaks the symmetry.

Only in the continued presence of such forcing does the driven process counteract the tendency of the system to relax to thermal equilibrium. But if that forcing is only available to some rare configuration of the network, the system of reactions will get locked into that atypical steady state – it’s the only one that can acquire sufficient energy to stave off equilibrium. In other words, the network becomes sensitively attuned to its environment in a way that enables it to exploit the resources on offer.

Imagine if we were by chance to stumble upon such a system. Wouldn’t we be tempted to say that it has adapted in order to take advantage of those resources? Wouldn’t we be inclined to speak of the adaptation in functional terms?

That is, of course, precisely what we do in evolutionary biology all the time: to speak of Darwinian adaptation in terms of function. In truth, this can be a little too easy – arguments still rage about what exactly the function of the giraffe’s long neck is,2 or the stripes of the zebra once so casually assumed to be camouflage.3 But the point is that bare physical laws, not selection, can by themselves create what looks like adaptive function.4

This is not to say that such things are acting in place of natural selection throughout the living world. After all, once replication with inheritance and random mutation are part of the equation, Darwinian evolution will surely come into play. But the work of Horowitz and England offers a cautionary story about how apparent fine-tuning of a complex system to ‘solve’ particular challenges shouldn’t be too readily given a functional interpretation after the fact. Equally, it shows that the abiotic ‘toolbox’ on which life can draw, both at its inception and still today, is more versatile than we might imagine.