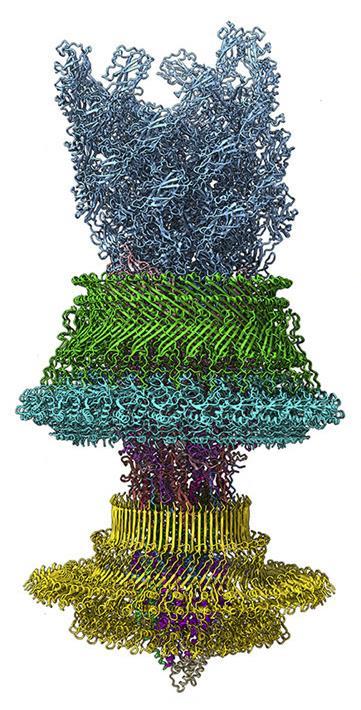 In 1986, Eric Drexler published Engines of Creation, a vision of what the nascent science of nanotechnology might mean for the future. Drexler claimed that nanoscale robots would one day swim through our bloodstream, attacking invaders like viruses and removing sclerotic deposits from the blood-vessel walls.

Drexler laid out the technical aspects of his vision in a 1992 book, Nanosystems, which argued that a ‘molecular assembler’ would position atoms exactly where we want them to build nanoscale devices such as motors and gears out of diamond-like carbon. If such assemblers could build themselves, this manufacturing process could be cheaply scaled up to make us masters of matter with atomic precision.

The books were hugely influential on futurologists. In Ray Kurzweil’s 2005 book The Singularity is Near, Drexlerian nanotechnology played a key role in the imagined merging of human and machine that Kurzweil believed would usher in a form of immortality.

Scientists were less enamoured. Some accused him of disregarding basic chemical principles by supposing atoms could be arranged into arbitrary structures. One of the most prominent sceptics was Nobel laureate Richard Smalley, co-discoverer of the fullerenes and a leading expert in carbon nanoscience. He argued in 2001 that Drexlerian nanoassemblers would be undermined by having fingers that are too ‘fat’ – bulkier than the structures they were trying to make – and too ‘sticky’, being unable easily to let go of the atoms they are positioning.

While such arguments rumbled on inconclusively, Drexlerian nanotech caught the public imagination. His apocalyptic vision of ‘grey goo’, mentioned in Engines of Creation as a hazard of replicating nanoassemblers that run riot and pull all the biomass on Earth into carbonaceous fragments, was irresistible to science-fiction writers – rogue Drexlerian replicators featured in Michael Crichton’s 2002 thriller Prey. And in Neal Stephenson’s steampunk future in The Diamond Age, Drexler is a hero of a world powered by carbon-based nanotechnology.

Three decades after Nanosystems, nanotechnology has become mainstream, but there’s still no sign of Drexler’s vision of it emerging. And yet… the fantastical, precision-engineered rotors depicted in his book spinning in their lubricated bearings, immediately spring to mind when faced with the unearthly elegance of a new structure of the bacterial flagellar motor, recently unveiled by a team at Zhejiang University in Hangzhou, China.1 Yongqun Zhu and colleagues have used cryo-electron microscopy to produce an atomic-resolution picture of this device, perhaps the most celebrated example of a biological nanomachine.

The motor sits in the bacterial cell membrane, its axle attached to a long filament of protein called the flagellum. It spins at several hundred revolutions per second, powered by an influx of hydrogen ions down an electrochemical gradient. As the rotor spins within two protein-based sleeve assemblies (each comprising several rings and sub-rings), the flagellum whips around and propels the bacterium through fluids. When all the motors turn in the same direction, their whiplike flagella twist into a single helical bundle that acts like a propeller. This motion drives the bacterium towards increasing concentrations of nutrients such as sugars or amino acids. If the concentration starts to decline, some of the motors are thrown briefly into reverse, breaking up the flagellar bundle and causing the bacterium to tumble at random before setting off in a new direction to see if that raises the concentration. In this way, bacteria achieve chemotaxis: the ability to swim up a concentration gradient.

The motor imaged by Zhu and colleagues – that of Salmonella bacteria – is about 26 nm in diameter, and is composed of 175 subunits of around 12 different proteins. (The whole in vivo assembly has more like 40.) Exquisitely balanced electrostatic intermolecular forces between the rod-like axle and the upper ring, embedded in the outer membrane, help both to hold it in position and maintain separation. The lower rings act as the rotor, engaging with stator units in the inner membrane to generate torque.

It’s amazing that evolution could produce a device so tiny and yet which looks so finely engineered. Does this mean we can indeed just shrink mechanics to the molecular scale, as Drexler implied? Not really. The flagellar motor is striking precisely because it is exceptional. Most of the cell’s nanoscale machines, such as the motor proteins dynein and kinesin that move objects around inside cells, are far less like miniaturised versions of our own. The cell’s mechanics is stochastic, not deterministic, and error-tolerant, not precision-built. It is a mechanics designed for the molecular scale.

Most importantly, no nanoassembler ever built this thing: it self-assembles, and not in Drexler’s thermally quiescent vacuum but among the messy chaos of the cell. What I said when I reviewed Nanosystems for Nature seems to be borne out: he was ‘proposing to do the hard way things that might be more readily, and more quickly, accomplished with a little chemical ingenuity’.