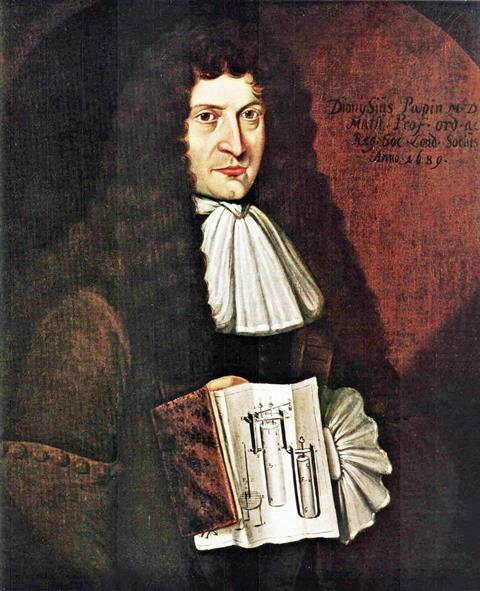 A solvothermal reaction conducted in a steel autoclave recently exploded inside an oven during the night. As one wag put it the next day ‘not for nothing do we call them bombs’. It was the latest in a long line of pressure-related accidents since the idea of pressure emerged in the 17th century, not least during the heroic period of the steam engine.

In 1628, the Dutch scientist Isaak Beeckman showed that the pressure and the volume of a gas were related, an idea codified later by Robert Boyle in London and Edme Mariotte in Paris. Beeckman also identified that water rises in a hand pump due to air pressure, not the Aristotelian idea of horror vacui (nature’s fear of empty space), which would lead to Evangelista Torricelli’s and Vincenzo Viviani’s barometer experiment and Torricelli’s observation that ‘we live at the bottom of an ocean of air’. After Blaise Pascal sent Torricelli’s barometer for a hike up the Puy de Dôme, air became something you could weigh. Experiments like these inspired a generation of investigators across Europe, among them a supremely confident young Frenchman.

Denis Papin was born in the village of Chitenay, near Blois. His family were moderately wealthy Huguenots – Calvinist Protestants – tolerated and protected in Catholic France by the Edict of Nantes. His uncle, a doctor in Saumur, ensured that Papin studied medicine at the University of Angers. Bored by his studies, Papin wrote to a family friend in Paris, Marie Charron, who had married Jean Baptiste Colbert, Louis XIV’s minister of finance. Colbert had initiated scientific meetings in the King’s Library, which took on a more experimental approach under the influence of the Dutchman Christiaan Huygens.

Papin slotted right in to this scientific circle and became Huygens’ assistant from 1671. Together, they did air pump and other experiments which they reported to the Royal Society in London. Most memorable was a gunpowder engine, a machine whose piston raised weights by the vacuum left behind after the expanded gases from a gunpowder explosion had been allowed to escape from a cylinder. If this sounds utterly insane, Huygens would later demonstrate a prototype capable of lifting ‘seven or eight boys’ using just a couple of grams of gunpowder.

Papin wrote up his many experiments in 1674, acutely aware that France was becoming increasingly hostile to Protestants. Shortly afterwards he left France with a letter of introduction, written by Huygens, to the secretary of the Royal Society in London, Henry Oldenburg. The result was that Papin became Boyle’s assistant, conducting experiments in magnetism, blood chemistry and respiration, but especially with the air pump. Many of these experiments were written up in 1680 and, with Boyle’s support, Papin was elected Fellow of the Royal Society the following year. 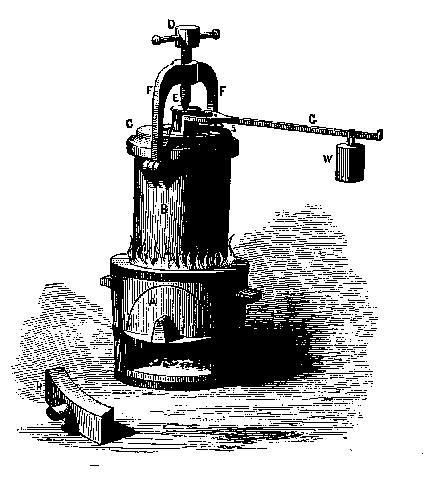 The digester: softener of beef and stiffener of hats

By then Papin was working on something new. Having observed that water boiled at different temperatures with pressure, Papin developed what he called a ‘digester’, which he described in a pamphlet with the catchy title ‘A New Digester for Softning Bones containing the Description of its Make and Use in these Particulars viz. Cookery, Voyages at Sea, Confectionary, Making of Drinks, Chymistry, and Dying with an Account of the price a Good Big Engine will cost and of the Profit it will afford’. A title like that was sure to attract attention.1

Brimming with self-confidence, Papin laid out the reasons for publishing the work. He hoped to attract those who never read anything from the Royal Society and who might be uninterested in science. He also set out some of the advantages of his invention: ‘By the help of the Engine here treated of, the oldest and hardest Cow-Beef may be made as tender and as savoury as young and choice meat.’

The digester was made from two hollow brass cylinders pressed together by two screws. Food could be placed in an inner glass sleeve and cooked under pressure. Papin installed a small tube in the lid, closed at the top with a flap of paper or leather that was held in place by a weighted rod. If the pressure rose too high, steam would be released. It was the first safety valve.

Recipes for cooks and confectioners followed, many of them ones you might try today with a modern pressure cooker. In passing Papin noted a new use for gelatine: ‘I have found that an old Hat, if imbibed with the Gelly of Bones, is become very firm and stiff … If such Gelly were used in making Hats, they would be extraordinary good.’

Papin now combined his digester with the earlier idea of a gunpowder engine and designed a prototype steam engine. But it was Thomas Newcomen who built the first commercially viable machine that would ultimately transform Britain and then Europe; it included Papin’s safety valve.

By this time Papin was getting older and being an assistant wasn’t enough. It was time to move on. Louis XIV’s revocation of the Edict of Nantes in 1685 had closed the door to a return to France. Perhaps with Leibniz’s help, in 1687 Papin was appointed professor in Marburg in Germany, a chair that would later be filled by Robert Bunsen.

Today, you might own a pressure cooker – it’s the route to fast food. But whether cooking food or autoclaving chemicals, don’t forget the pressure. It’s astonishing how many people forget that simple equation pV=nRT.

We are grateful to Hugh Aldersey-Williams for help with Dutch translation. By contrast, Roland Pease’s suggestion was of no help at all.

Denis Papin, “A New Digester for Softning Bones containing the Description of its Make and Use in these Particulars viz. Cookery, Voyages at Sea, Confectionary, Making of Drinks, Chymistry, and Dying with an Account of the price a Good Big Engine will cost and of the Profit it will afford”, Henry Bonwicke, London, 1681. https://archive.org/details/b30330245/page/n12