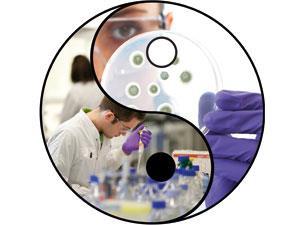 You’d think that the chemists and biologists working in drug discovery would understand each other pretty well by now. After all, we’ve been partners for a long time. You would be wrong about that, though. Ask scientists on either side of the fence, and they’ll tell you that those other people don’t grasp some essential points, no matter how many times they’ve had the opportunity. The biologists, for example, keep having to explain some things to the chemists…

Living systems are more complicated than any chemical experiment that’s ever been set up. Reproducing biological results is just harder than trying to reproduce synthetic organic chemistry procedures, because there are so many more variables. And we don’t even know what many of those variables are – we just have to deal with the consequences when they become important. So don’t keep being surprised when the new batch of protein needs refolding, or the new cells don’t grow as quickly as the old ones did, or the pharmacokinetics are so far off in that one rat. It happens. It’ll always happen.

There are such things as error bars. Chemists seem to like to live in a world with more significant figures. So a 50-nanomolar compound is twice as potent as a 100-nanomolar compound, right? Wrong – that is, wrong until you’ve run those numbers enough times to see what their ranges are. And in a lot of assays, those two are probably indistinguishable. That doesn’t stop the medicinal chemists, especially the less experienced ones, from rating their compounds on the basis of random noise in the assay.

Nothing is real until it’s been repeated. Now, that’s a basic principle of science, but chemists get a little cavalier with it, because chemistry is typically reproduced a bit more easily. But assay results are moonshine until they’ve come back the same way twice (and they might even be moonshine then – you’ll want to check). Never base a serious decision on N=1. Many biologists won’t even pick up the phone until the repeats have come in, and who can blame them?

But for their part, the chemists would find it pleasant if their colleagues in other disciplines would internalise some facts.

Some compounds really are uglier than others. It’s hard to quantify this, and it’s hard to explain to someone who hasn’t done medicinal chemistry, but it’s true. Biologists, I’m sad to say, are famous for getting excited about compounds that make the chemists groan and roll their eyes, and those are not necessarily the reactions of blind prejudice. If you’re excited about some hit compound’s structure, but you can’t find a single chemist who takes it seriously, there probably is something wrong with it.

We don’t really know any shortcuts to make compounds work in vivo. It would be nice if there were some group that we could tack onto a molecule to make it slide through the blood–brain barrier, or if we could do ‘the usual thing we do’ to make an antibacterial compound avoid being pumped right back out of the bug. But there isn’t a usual thing in those cases. We have a broad idea of the kinds of properties that our molecules need in order to cross various types of membranes, but those are very rough guides. Plenty of compounds that meet all the cut-offs still refuse to behave the way we want them to – those darn living systems again – and we usually just have to trial-and-error our way out of trouble. There’s no guarantee that we can do that and keep all the activity and selectivity that we want, either.

We don’t have a big barrel of compound with a scoop stuck in it, waiting for your in vivo experiments. This is a longstanding problem in some departments. The biologists ask for more material than they need, sometimes much more, just to be safe. And the chemists learn not to let on too early just how much they’ve made, for fear that it’ll all get used up and they’ll have to make it again. But after a few examples of compounds being there when a sudden request calls for them, some biologists start to assume that there’s always plenty of material, and sometimes there just isn’t. A little honesty on both sides would go a long way here.

In fact, that would go a long way with most of the other misconceptions on lists like this one.