Among the many forms our science takes, organic chemistry is a relatively young member. With all that we’ve achieved, it’s easy to forget that Friedrich Wöhler’s 1828 synthesis of urea – generally heralded as the birth of the field – is actually no older than the first electric motor. And it often seems that the rate of change is only accelerating. Along with tangible improvements in the lab, like new reagents and equipment, the concepts and strategies we use to plan our syntheses are also constantly evolving. Sometimes these abstract improvements have a far greater impact than a new reaction or piece of equipment ever could.

Figure 1 – Many terpenes share their carbon backbones, only differing in oxidation patterns

The classic example of a revolutionary concept in organic chemistry is that of retrosynthetic analysis, developed by E J Corey at Harvard University, US, in the late 20th century. Indeed, Corey’s citation for his 1990 Nobel prize in chemistry is careful to acknowledge his contributions to the theory of organic chemistry equally with his synthetic achievements. Of course, chemists are constantly trying to introduce new language and ideas, but most do not endure the test of time. Even though Corey’s seminal formalisation of the retrosynthetic process will probably be taught for decades to come, not all of his neologisms fared so well. When was the last time you heard someone talk about a ‘carbogen’, a ‘T-goal’, or an ‘EXTGT tree’? 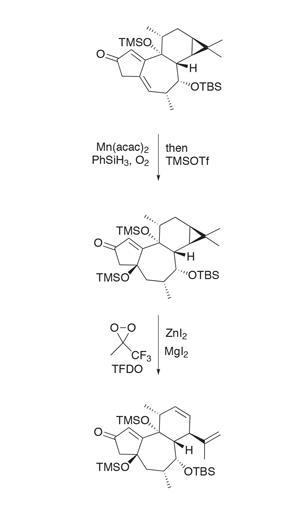 An example of a newer – and somewhat more specialised – strategy for planning and executing total syntheses is the ‘two-phase’ approach to terpene synthesis proposed by Phil Baran at the Scripps Research Institute, US. Terpenes are among the largest and most important classes of natural products, and nature makes them in two distinct phases. First, a hydrocarbon skeleton is assembled from building blocks that are enzymatically oligomerised and then folded into countless intricate carbocyclic ring systems. This is the cyclase phase. Next, more enzymes carefully flesh out this carbon skeleton with oxygen; adding alcohols, carbonyls, epoxides – all with exquisite selectivity – in the oxidase phase.

This method is perfectly suited to divergent syntheses, as several natural products can share a carbon skeleton, differing only in their oxidation patterns. Therefore, if a common carbon precursor can be made, variations in the oxidase phase can allow access to multiple targets. The Baran group has been using this biomimetic tactic in the lab for a number of years, including an elegant total synthesis of ingenol in 2013. Now, the group has repurposed an intermediate from that route – the endpoint of the cyclase phase – to synthesise phorbol (figure 1).

The team’s previous intermediate is accessible in six steps from commercially available (+)-carene. I have heard Baran group members jokingly refer to acquiring starting materials as the ‘purchase phase’ of a synthesis. This tricyclic intermediate already contains all but one of phorbol’s carbon atoms, so the group begins with some oxidation chemistry. First, a manganese-catalysed Mukaiyama hydration installs the tertiary alcohol at the ring junction, which is swiftly protected (figure 2). Next, an interesting oxidation–fragmentation with methyl(trifluoromethyl)dioxirane (TFDO) temporarily opens the cyclopropane ring and sets the stage for further oxidation.

After another hydration, and oxidising the cyclohexene to a 1,2-dione, the group then needs to re-close the cyclopropane (figure 3). This proved quite challenging, but an acetate protecting group on the intermediate enediol shuts down an alternative pathway and allows the desired cyclisation to proceed smoothly.

Figure 3 – The cyclopropane is opened, oxidised and modified, then re-closed

From here, a handful more redox adjustments and installation of the final methyl group complete the total synthesis in short order. The whole route clocks in at 19 steps from (+)-carene, well under half the previous best.