If we are going to address gender equality in science, we need to recognise our own biases, says Nicola Gaston 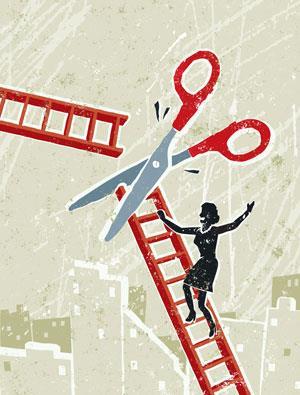 I can trace my interest in the issues facing women in science back to one invitation. It was to an event for ‘women in science leadership’ that featured a one hour presentation by the chief executive of the Royal Society of New Zealand, followed by a two hour session on ‘how to dress to influence’.

This is not the only own goal scored while attempting to encourage more women in STEM careers. From the 2012 ‘Science: it’s a girl thing’ video by the European Commission – which focused less on science and more on lipstick – to the 2015 IBM campaign enthusing about how to ‘hack a hair dryer’, the pitfalls of efforts to get girls into science seem to be broad and hard to spot in advance.

Such events and campaigns are rather more common than they have any right to be. It’s almost as though, despite recognising the sexism apparent in scientific careers, we haven’t actually come to grips with the root causes of this bias.

This isn’t so surprising: when discussing gender issues everything feels personal and touches on our own relationships. It’s very hard to look at the problem directly without bringing your own experiences into it, which are themselves not independent of the unconscious biases that have formed throughout our lives. We shouldn’t pretend that we can achieve complete detachment when discussing gender in science; instead, we should focus our discussion on studies that have attempted to separate the personal from the systematic.

The Moss-Racusin study in 2012 looked at the effect of gender on hiring decisions made by scientists.1 It demonstrated a clear bias in favour of a CV with a male name at the top, rather than a female name. This wasn’t in itself surprising, given that the results echoed those of many similar studies conducted previously. The novelty was proof that scientists – both women and men – are subject to the same unconscious biases as the general public, despite the fact that they have been trained to be more objective.

But is objectivity in science an attribute we can aspire to as individuals? Or is it something that emerges from the application of the scientific method?

A 2005 paper cited by the Moss-Racusin study from Yale University2 described a similar experiment in gender swapping CVs, but included an extra twist: the participants were asked to evaluate their own objectivity. Those who rated themselves as highly objective were, paradoxically, the most demonstrably biased. Scientific values – in particular the aspiration to objectivity – may actually undermine our ability to make unbiased judgements.

The problem of sexism in science is one of culture change, and requires an ongoing conversation

In a 2015 study published in Science,3 the difference in gender balance across scientific disciplines was compared with beliefs about what it takes to succeed. It found disciplines that value innate talent more heavily (for example maths and physics) had a greater gender imbalance than those who believe hard work is the key to success. These disciplines were also the ones with the greatest exclusion of African Americans, for whom similar stereotypes as those that hold for women are often applied.

When combined with the earlier data on unconscious bias in the evaluation of CVs, a pattern emerges. Belief that innate talent is required for success makes it easier for stereotypes about what talent looks like to influence your decisions. Likewise, belief in your own objectivity makes it easier to hold judgements without asking where those judgements came from.

And it matters that we understand how sexism in science comes about. It is clear that we only buy in to schemes to rectify injustices when we understand why and how that injustice occurred. Failure to grasp these root causes makes it far too easy to feel out of balance when the playing field is leveled.

Max Planck said: ‘A new scientific truth does not triumph by convincing its opponents and making them see the light, but rather because its opponents eventually die, and a new generation grows up that is familiar with it.’ While this idea is comforting, counselling patience and optimism for the future, we cannot write off dealing with sexism in science as the business of the next generation. Psychological studies carried out on undergraduate students demonstrate the ongoing prevalence of unconscious biases. Younger generations are certainly more willing to acknowledge the existence of their unconscious biases, but eradicating them is an ongoing challenge for all of us, and one that requires action.

The problem of sexism in science is one of culture change, and requires an ongoing conversation. We need to start talking about ourselves.

Nicola Gaston is senior lecturer in chemistry at Victoria University of Wellington, New Zealand, past president of the New Zealand Association of Scientists, and author of Why science is sexist.