Last November, Bill Gates knowingly gifted the world’s caption writers an open goal by holding a flask under his nostrils and breathing in the worst smell in the world. Manfully keeping a straight face under extreme olfactory duress, he described it as ‘a potent combination of sewage stink, barnyard sweat, and bitter ammonia topped off with vomit – or was it parmesan cheese?’

The instigator of his torment was Firmenich, the Swiss scent and flavour company whose expertise extends deep into the art of perfume production and associated areas of chemical synthesis and biotechnology. Now a partner of the Bill & Melinda Gates Foundation in its philanthropic project to improve sanitation in the developing world, Firmenich is aiming to tackle the daunting odours associated with open toilets in parts of the world where those facilities are a fact of life – smells which can drive people to use other quite unsuitable public spaces instead. The odour brewed for Gates’s delectation was a reproduction of that intimidating aroma at its most formidable, a concocted worst-case scenario.

The traditional approach to masking unsanitary odour has been to find something that smells even more strongly of something more pleasant, but Gates and Firmenich are working on a more advanced strategy based on psychophysics as well as chemistry. The intention is to understand not just how specific molecules act on scent receptors in the nose, but also how to influence the picture built up by the brain when it hears from those receptors about the smells in the vicinity. 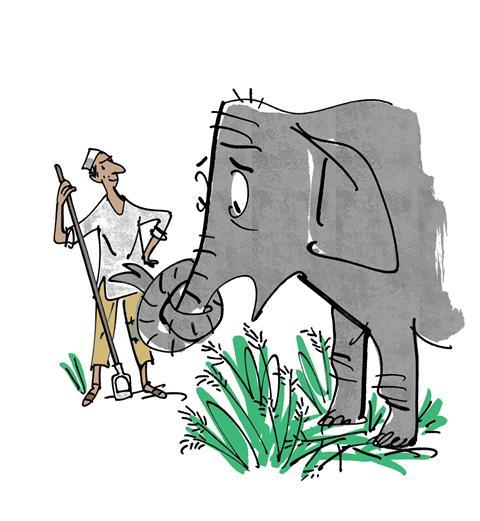 This effectively turns the problem of odour masking into an issue of perception: the art of making someone believe that a smell has gone away, rather than necessarily the actual removal of the odour. But in this arena, agreed definitions can be elusive. A 2011 US investigation into odour masking reported that a significant initial challenge to its business was the need to define a normal sense of smell in the first place, while a 2013 study into masking the smell of natural gas remarked that ‘odour masking is not well understood, and it may be that scientists are not in full agreement as to its causes’.

Some help in mapping the perceptual terrain may come from the study of ‘olfactory white’ – the smell equivalent of white noise, something able to overlay and neutralise any specific odour. Taking a cue from the science of noise reduction, researchers have found that the effect of olfactory white can be delivered by mixes of compounds covering the full range of human scent perception, stimulating the whole physiochemical space to an equal intensity all at once.

Treating scent as a signal processing problem in this way opens up the possibility of manipulating some other human habits beyond just waste disposal. It could provide a way to camouflage the smell of foods, hiding the scent of a healthy but unpalatable ingredient inside that of a more preferred one, and nudging eaters towards a better diet. The same trick might even work on other species entirely. In Sri Lanka, Asian elephants have been killed by farmers protecting their crops from damage, when they are drawn to molecules produced by ripening rice. Masking those odours might alter the behaviour of the animals without harming them.

Elephant-brand olfactory white may be some way off, but if odour masking succeeds in making pit latrines seem to smell less like the contents of Bill Gates’s test tube, the health benefits for impoverished populations in areas of India and Africa could be immediate. The philanthropist had the gleam of a healthier world in his eye, even if it was watering at the time.