A chemical plant on a night shift is just as lively as through the day, says Chemjobber, but for different reasons

Staying up late is nothing new to chemists, especially in a university setting. I enjoyed late nights in the laboratory in graduate school. There is nothing quite like starting a reaction at 10pm, knowing that when you go to use the NMR, there won’t be a queue. You can blast your favourite bad music as long and loud as you like. Working alone is unsafe, but if you are at a large university, chances are you won’t be alone. 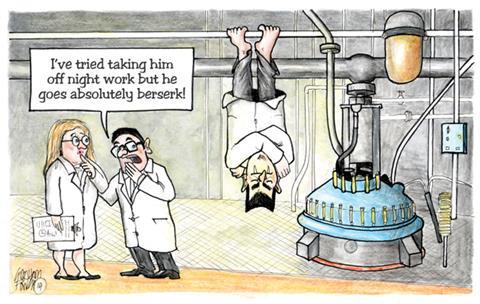 Chemistry still happens in the laboratory when chemists are not there, of course. Reactions stir overnight; autosamplers whir away, feeding chromatographs and NMRs. Many a chemist leaves a beaker full of product solution in a hood, hoping to come back in the morning to lovely, needle-like crystals.

Stories of plant workers falling asleep are legendary, and the safety consequences severe

You can come back to accidents as well. I saw the aftermath of an overnight stir gone awry once: a large scale reaction (well over 80 litres) wasn’t stirring very well, so the chemist turned up the agitator speed and left for the evening. In the morning, the first colleague to open the laboratory door noted a powerful solvent smell. They then saw litres of reaction solution on the floor. The rapidly spinning agitator had likely come loose and begun to stir against the wall of the reactor until it broke through. Losing a week’s work through a 5-inch hole makes it seem more worthwhile having someone around to watch reactions during the night hours.

In the 24-hour environment of a chemical plant, just watching reactions is not enough. When there is work to be done and products to be supplied to customers, chemistry does not stop at 5pm. Two or three shifts of operators will work around the clock to load reactors, follow production records and make, dry and package the chemicals that a company sells. They truly are the heart, hands and brains of any good chemical plant. While their education and training may be different from a process chemist, they have a deep understanding of how chemistry and chemicals interact with the particular equipment of a facility.

Just like in labs, there are always the ‘unknown unknowns’ in the plant during off- hours. One particularly cold winter night, I wanted to witness the addition of a particularly nasty reagent to reassure myself that, even though I had not seen an exotherm in the laboratory, there would not be an even more dangerous one in the plant. There I was, with full-face respirator on, watching the operators wrestle the little drum onto the scale. They opened up the bungs, poked a probe into the drum and promptly hit a huge chunk of frozen reagent. That ended the evening’s work, as the reagent needed to be melted before it could be used. The operators loaded the reagent into a warmer, wondering why the process chemist had not considered the freezing point of this liquid. I went home, scratching my head at how I could have missed such a mundane detail.

Of course, the human brain can have trouble with 24-hour operations. The stories of plant workers of all stripes falling asleep are legendary (and the safety consequences can be severe). An amusing (and not too dangerous) story: chemists routinely perform simple liquid–liquid separations in the laboratory with separating funnels. But when you have a glass-and-steel reactor, operators standing at a sight glass (a window in the exit pipe from the reactor) may have mere seconds to switch a valve to stop the flow of solvent when the interface passes. Operators have been known to fall asleep for just a blink and have the phases change just as fast, requiring re-transfer of gallons of solvent if they are unlucky.

There’s a great deal of difference between the plant during the daytime hours and the off-hours when it is only the operators about. The bosses are gone, so there are fewer hurried consultations and meetings with pen and paper or a whiteboard. Plant operators are more likely to take a moment to chat quietly with you and tell what they really think might be happening inside the reactors or with a troublesome piece of equipment. A wise process chemist will listen carefully. Radio chatter can wander away from ‘bring compound X from the warehouse’ towards sport or funny stories. Rather than trucks of chemicals to be used in the plant, late night food may be delivered to fuel the operators.

The occasional phone call is another reminder that the plant is working while a process chemist is sleeping. Often, it is simply reporting data, innocent questions or notifications of temperature a degree or two above where they should be. One must be ready for unexpected issues. There is nothing quite like being jolted awake by a telephone, followed by a pop quiz about the intricacies of a process that you know well, but can’t quite remember at 3am. Hopefully, you can answer the question – and if not, you can always try: ‘I’m really tired, can you ask me again in the morning?’