What happens when the chemical industry runs out of feedstock

There’s an old saying: ‘If I had some ham, I could make a ham and eggs, if I had some eggs.’ In the chemical industry, the same is true: in order to do chemistry, if you have the reactor space and the time, you have to have the chemicals: the starting materials, the reagents and the solvent. Without any one of those items you can’t do chemistry, you can’t make products to be sold and you can’t bill your customers, so you might as well stay home. 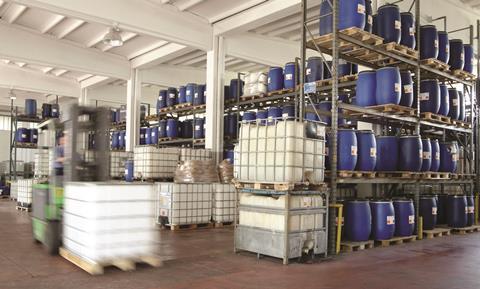 Even now, the UK faces this issue. Starting in June 2018 there has been a shortage of carbon dioxide. This shortage, as with so many, was not planned and has a variety of factors, mostly having to do with the summer shutdown of European ammonia plants, combined with high prices for raw materials and low prices for ammonia. As carbon dioxide is a by-product of the manufacture of hydrogen for the Haber–Bosch process, there is now a shortage of carbon dioxide for the food manufacturing industry as well. Pity the plant manager who is searching for 1000kg of carbon dioxide for a plant process that has been planned for months – and congratulations to those who bought their tanks and had them brought in early.

These shortages happen routinely, of course. Companies employ purchasing agents to prevent these shortages from harming their facilities and get the vital raw materials their plants need. These agents spend their time scouring the internet and trade shows, hunting down obscure manufacturers of chemicals that their employers need. Working on their laptops and their ever-present phones, they excel at tracking down and finding pallets of chemicals and getting them to their plants.

Sometimes nothing can be done. During the great recession of the late 2000s, there was a severe acetonitrile shortage. Acetonitrile is a by-product of the manufacturing process that transforms propylene and ammonia to acrylonitrile (used to manufacture polyacrylonitrile). As the economy slowed there was a slowdown in the purchase of acrylonitrile, and stocks of acetonitrile dwindled. A hurricane in Texas then resulted in the shutdown of another manufacturing plant, kicking off a dramatic shortage of acetonitrile around the country and prices skyrocketed. In some cases there was no acetonitrile available, no matter the price offered. I was working at an industrial R&D centre at the time. There, dozens of HPLC instruments were using litres of acetonitrile and water. Heroically, the analytical manager developed a completely new set of HPLC conditions that used methanol and water. This won him praise and recognition – and allowed the data from those crucial instruments to flow unchecked.

And sometimes unexpected shortages can offer an opportunity. A long-time customer of my company was purchasing a material from another overseas manufacturer and were informed of a ‘force majeure’, an unforeseen event that did not allow them to fulfil their contract to deliver material. (In this case, it was rumoured to be an explosion in their plant.) As our customer was deeply in need of this material, they turned to our company to see if we could manufacture it.

To make this project progress, we required a specific isocyanate, first in laboratory quantities and subsequently in hundreds of kilograms. Getting the laboratory quantities was hard enough – there was at least one 100g shipment that spent a month or two ‘lost’ in various warehouses before arriving at our laboratory. While I was working on the laboratory studies, our purchasing agents were finding this material. It was only after many phone calls and emails to our contacts that we were able to secure several hundred kilograms of this precious material.

Naturally, this material was overseas. Because of its toxicity, it was not able to be shipped by air. Instead, it needed to be put in its own shipping container, wait on a dock to be loaded in Asia and then it spent a month on one of the enormous freighters that plies the sea trade, disgorging shipping containers at each dock. When our shipping container reached the US, it needed to pass customs (not always a guarantee) and be trucked to our facility, where we received the shipment with open arms (after the material passed quality control, of course). We were able to use this isocyanate in our plant, and help alleviate our customer’s shortage. A happy ending. Until the next shortage, that is…