Computer-assisted drug design always looks like it’s just about to work, says Derek Lowe, but the reality is complicated

I started work in the drug industry in 1989, which was an unusual era. The late 1980s had seen a huge surge in the number of people and companies trying out computational drug design methods, and although I didn’t realise it at the time, I had arrived close to the peak. My company had invested in a good-sized room full of impressive equipment, and the sign on the door said ‘CADD’ (computer-assisted drug design). In response, some of the medicinal chemists down the hall had put up a sign proclaiming their lab to be the ‘brain-assisted drug design’ group.

This mix of enthusiasm and wariness (‘That would be great … if it works’) has been characteristic of the field since its beginnings. I recently came across an essay by Cyrus Levinthal, who in 1964 at the Massachusetts Institute of Technology (MIT), US, became (as far as anyone can tell) the first person to display a protein’s 3D structure on a computer screen. He was excited to try docking small molecules to screen for drugs, and to work on the protein folding problem. But although he never lost his enthusiasm, he seems to have quickly found that these ideas were much harder to realise than they might have appeared. And so it’s gone ever since. The whole BADD/CADD dispute turned – at times – into an almost theological argument, with upstart departments (and upstart companies) more or less telling their old-school colleagues that the new breed had come to displace them. 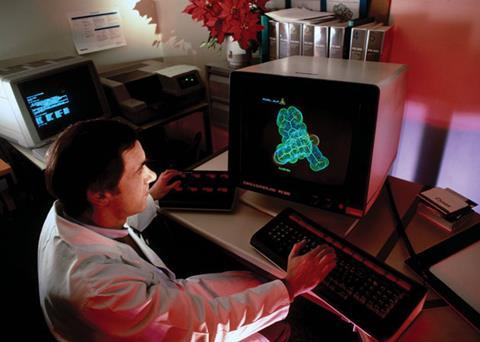 The value of computer-assisted drug design vs. old-fashioned 'brain-assisted' drug design has been a long-fought, tense battle

From 2015’s vantage point, doing that with 1989 equipment looks nearly as likely as doing it with MIT’s 1964 setup. The tasks that everyone would like to accomplish are the same ones as ever: telling the medicinal chemists what compounds are most likely to bind their targets, virtual screening of huge compound collections, and so on. But these have been able to soak up all the computational advances of the last 25 years, and apparently more besides. If you’d been able to tell some of the enthusiasts back then that these tasks would still be tricky, even in 2015, and that people would still be making and screening compounds the old-fashioned way, they would have been nonplussed, to say the least.

To my mind, that’s been the biggest public relations problem with computational drug design: it always looks like it’s just about to work. Some of its proponents over the years haven’t helped, with their insistence that yes indeed, it really is working now and the new era is at hand. But the opposite error isn’t much better: deciding that this stuff has never worked and never will.

These tasks have soaked up all the computational advances of the last 25 years, and more besides

Some of this hostility has been driven by the gee-whizz aspect of the publicity over the years. Going back through the popular press, you can find any number of articles showing the incredible new world of computational drug discovery, with intent scientists pointing at whatever that era’s spiffiest graphic display might have been. There are many people who have had reason to feel as if they’ve been sold a bunch of fancy special effects instead of the working drug discovery technology they expected, even if (on closer inspection) they may have mostly been selling it to themselves.

But at the same time, computational methods really have improved greatly over that time, and continue to do so. Some of this, naturally, has been driven by the extraordinary increases in computing speed, but there have been advances in software and in methods as well. None of this looks to be slowing down. Perhaps we’ve all just been impatient with the technology, since what we expect from it seems so clear and straightforward, just as it did to Levinthal when he saw that first protein backbone rotating on his round black-and-white screen. From a longer-term viewpoint, computational chemistry has probably been moving along quite well, with the boom-and-bust cycles of enthusiasm and disillusionment being, in the end, just tiny wiggles in an ascending line. I’m still not going to be so foolish as to suggest what exact year I expect the change to come, and it’ll probably be apparent only in retrospect, anyway. But we’ll surely continue to wave that magic wand until real sparks start shooting out of it.