It was a corporate bait-and-switch just two pages in length. The second page was never disputed – shareholders admitted to signing it. However, they claimed the first page was a substitution, altering the meaning of the document and transferring funds to a suspected fraudster. 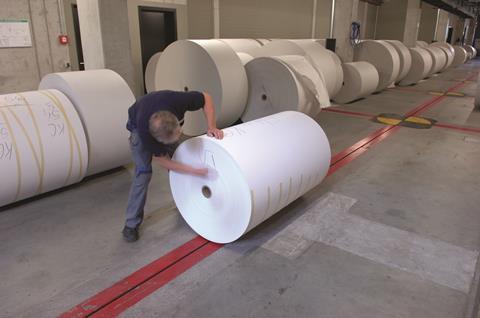 I fly like paper, get rolled in reams, when you catch me at Borders I got UVLPs on my frame

Was the first page switched? In hopes of getting an answer, forensic analysts at Eurofins Forensic Services shined a light on the document in question. They uncovered a forensic clue previously unreported.1

Paper often plays a pivotal role in criminal investigations, from fraudulent documents to illicit letters and ransom demands. Analysts process paper for latent prints, object impressions, biological and trace evidence, handwriting and typesetting – all in the hopes of uncovering connections between a crime and person(s) of interest. If a document is called into question, the tell-tale signs that make or break a case may even be between and among sheets. For example, is a sheet of paper from a particular ream or pad? And was a page removed or replaced in a report or contract?

In the case outlined above, the results of which were recently published in the Journal of Forensic Sciences, the answer was on the page itself. The analysts describe it as having ’the appearance of stripes, like a large “barcode,” running vertically down the sheet of paper and spanning the entirety of its width.’ These stripes, found when the paper was examined under an UV torch, were dubbed ultraviolet line patterns (UVLPs) by the analysts, which prompted a furious paper chase.

The Eurofins analysts looked at normal A4 reams of paper. They noted some reams had UVLPs, with each pattern ‘appear[ing] to vary in number, spacing and intensity’. Within a single ream there were sets of UVLPs that ‘repeated every sixth sheet (there were five different sets of patterns) and could be matched between sheet one and six, sheet two and seven, and so on.’ Paper weight seemed to influence a ream’s UVLP repeat interval. Interestingly, UVLP ‘patterns observed did not follow from one ream in a box to the next ream in the same box’.

Each UVLP pattern (and the sequence of these patterns within a ream) could allow pages to be grouped and sequenced. The team expanded their research further, purchasing eight reams of paper from different companies and examining 100 case files from different police forces. These confirmed Eurofins’ observations – some reams had UVLPs, with each UVLP set containing characteristics that could allow pages be grouped and possibly sequenced.

The analysts expanded their ream studies, contacting colleagues around the UK to request they print a supplied 20-page document using an unopened ream of A4 paper. This resulted in 25 document samples spanning 21 different paper companies. The 20 pages contained reference sheets and those marked for further examination.

Analysts used the reference sheets to determine the general characteristics of UVLP patterns for each sample. The team noted four samples with UVLPs of sufficient visibility and complexity to enable differentiation between sets and correctly group the patterns.

The sheets marked for further examination were shuffled like a deck of cards to ensure they were randomised and then analysed. Using UVLPs alone, the team were able to match the four sheets with identifiable UVLPs to the correct reference pile, and in three of the cases were able to put them in correct page sequence (for the final sample, ‘patterns were not changing sufficiently between each pattern set’ to enable sequencing).

Why are UVLPs present in some reams, but not others? Why are some UVLPs highly visible and complex, allowing for grouping and sequencing, while others were not? Why do UVLP patterns repeat and alter within a ream? And how are UVLPs produced? As analysts discuss, it likely comes down to the chemistry and mechanics of paper production – from producing the pulp to how bulk paper is pressed, cut, assembled and packaged. Each step could influence the presence or absence of UVLPs, their patterns and repeatability and ultimately their usefulness in helping forensic analysts do highly a specialised paper audit.

Back to the bait-and-switch case. ‘In this particular case, the presence of UVLPs could not be used as evidence of a page substitution,’ analysts noted in their recent paper. This is perhaps because there just was not enough paper to link (or unlink) the two pages in question. But another fraud case gave Eurofin a chance to see if UVLPs were a valuable tool. This time the papers in dispute were invoices. Were they from multiple suppliers, as expected, or a from a single source? Using UVLPs, the Eurofins analysts were able to find evidence that all the invoices had been printed from a single ream of paper – odd if the invoices were supposedly from different suppliers. Paired with handwriting evidence, this ‘suggested that one person had completed all the invoices, and therefore the invoices had not originated from several suppliers’.

Previously unnoticed, UVLPs, paired with other analysis techniques, may just provide investigators a paper trail all the way to a suspect.